A DiRTy day in Cardiff

I’ll be quite honest, I’m not really an off-road racing gamer. My vices are Action, Adventure and strategy games and have only briefly found myself dabbling in the racing genre with Forza and Project Gotham. However, with Codemasters bringing an exclusive sneak peek at DiRT 3 to my hometown in Cardiff in celebration of the Welsh Rally, how could I say no?

Codemasters, in collaboration with Monster, helped fund a no holds barred party that started at midday and went on way into the early hours of the morning. All of this in celebration of next year’s DiRT 3. Not only did I get a World First sneak peak at the game, I also some hands-on with Pre-Alpha Code and got to see some of the features Codemasters have been tinkering with.

How was it? Let’s find out…

Most things happen in London. It’s the ‘heart of activity’ as far as the gaming World is concerned and so I was genuinely surprised to get invited to an impromptu event in Cardiff. Even on the day I was still pinching myself, thinking this couldn’t be real, however, upon entering the Soda Bar on Mill Lane at 12.45pm to a free bar and full lunch buffet with DiRT 3 banners emblazoned in front of me, I started to believe the hype!

The presentation got underway at 1.20pm and was kicked off by DiRT manager, Edd Newby Robson. He talked a bit about the history of the series, from the influence of legendary Colin McRae and how the series has evolved over the years. He then introduced the audience to a brand new trailer of DiRT 3, showing the variety of weather conditions that your rally car will be contending with. The trailer showed how each weather condition will affect the handling of the rally car and how you will need to adapt and adjust while playing. The finished game will feature rain, sunshine, hard rocky surfaces, fog and for the first time in the DiRT series, snow. The rally car, depending which one you have chosen, will respond to each weather condition and recreate the handling faithfully as per the original specifications of the car you’re in control of. Codemasters have spent tireless hours of research attempting to get this just right, attending rally events, watching first hand as a spectator and even driving the cars themselves. They truly are dedicated to their cause. While the trailer was not indicative of in-game footage, what we saw was very impressive and met with warm enthusiasm by the capacity crowd on hand.

This year, it’s not just the rally that Codies have been working on, they’ve introduced You Tube sensation, Gymkhana to the DiRT series, a new feature this instalment that is liable to be one of the major selling points for DiRT 3 next year. Gymkhana is a stunt focused driving experience that is guaranteed to get your heart racing as you put pedal to the metal (or… thumb to the button… ). Pioneered by Ken Blocke (who was also on hand at the event), you will get to play in a sandbox type area that requires you to chain together moves, complete challenges and use the props on display to your advantage. 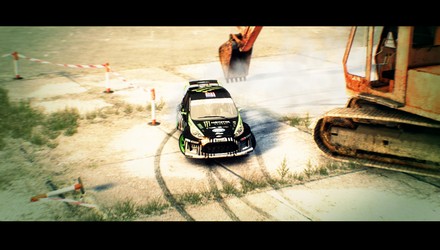 We were also informed of some of the track choices that will be made available in the finished game, both for Rally and Gymkhana circuits. In DiRT 3, you’ll be competing in Kenya, Finlan, Michigan and Brazil and facing different courses. Some of these looked particularly mouth-watering and appealing to the eye! There will be 32 Rally Stages in the final game and six head-to-head stages. DiRT 3 will also have 100+ routes in the game as opposed to 42 in DiRT 2!

The designers talked us through the many stages they’ve been through in the development process, such as the ability to now sync the game with You Tube, enabling players to share their best Gymkhana moments with one another, their favorite crashes, their favorite stunts. The team stated that this is their way of giving back to their original inspiration for this idea, they got the idea from You Tube, so they’re allowing users to submit Gymkhana back to it.

The game will also offer split-screen for the game, enabling local multiplayer as before from DiRT 2. You’ll naturally be able to play online in all of the courses shipped with the game, in both rally and Gymkhana discipline, and the game will support party modes and enable you to play with eight people online, making for some fast and furious action.

DiRT 3 will also play host to vintage rally cars, from the 60’s and up to the present day. All in all, the game will have fifteen Car Classes, fifty Cars and nine Rally Classics. There will even be cars from next years season made available in DiRT 3, keeping the game very current and up to date. 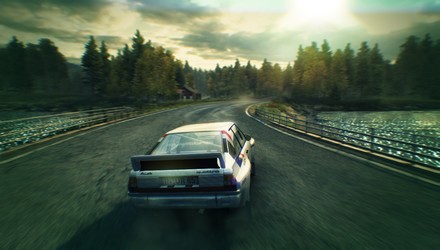 We were then shown some in-game footage from a Pre-Alpha Build. The engine is a direct descendent from DiRT 2 but is obviously more polished and more detailed. The landscapes seem more alive, the cars are still extremely well represented, the rear view mirror was a real joy to view and is so close to perfection, it was mesmerising, even the crowd is more interactive than ever as you see them run out of the way of incoming cars and jumping back over the guard rails. DiRT 3 already looks and feels like a perfect rally game. At this point, the presentation was concluded and the press were allowed to get their first taste of DiRT 3! I’ve compiled a separate report with my hands-on impressions of DiRT 3, so stay tuned to This Is My Joystick soon for my findings.

After the presentation and hands-on with the game, we were taken into Cardiff Bay for the opening ceremony of the Welsh Rally and then later on, we were invited to a VIP Party where we got to rub shoulders with the developers of the game, rally drivers and celebrities such as Justin Lee Collins! 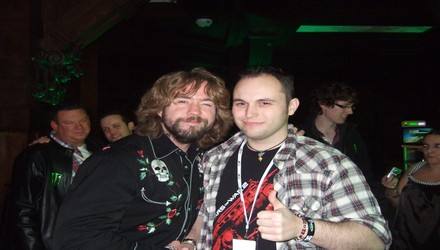 Monster and Codemasters put on an awesome show and a great time was had by all. Thanks for inviting us, guys!

Just in case some of you had any other questions about the game, I compiled a short FAQ to help answer some of the questions you might have so far:

Will this be Kinect/Move compatible?
I can confirm that DiRT 3 will not utilise either Kinect or Move technology and don’t expect this to get added closer to the games release, either. Asking some of the development team on hand, they said that the thought of using it had occurred to them, but their focus with DiRT 3 was to recreate a faithful rally experience and have spent more time configuring the game to control with steering wheels and of course, the joypad. This also means that the game is highly unlikely to see release on Nintendo Wii. Sorry motion folk…

What is Gymkhana?
Think Parcour for Rally racers and you’ll be on the right train of thought. Essentially you’ll be placed in control of a rally car and have a series of obstacles with which to perform stunts around them. I played this side of the game on a construction yard with tractors, ramps, poles and lorries. You’ll basically make your way around the circuit, trying to drive around the poles, driving underneath the lorry, jumping over the ramps and basically trying to look as stylish as possible in the face of great danger. The concept is inspired by a series of You Tube Videos created by racer Jim Connor and relives his legacy through DiRT 3, giving players the chance to not only race in tumultuous conditions but also perform death-defying feats for thrills. This is an exciting addition to the game that will definitely become a fan favourite. 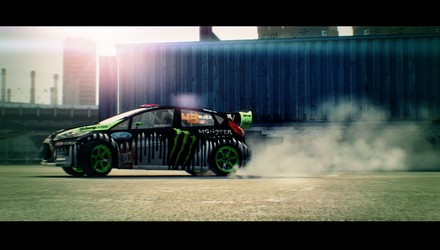 Mirrors Edge in a Car!

Will there be any creative tools in the game to allow user created content?
No, unfortunately. Asking the development team about this, they said they did talk about including this but opted out of adding it into DiRT 3 as they wanted to ensure that they get the core gameplay mechanics of gymkhana refined in the first instance before allowing players to manipulate it as they see fit. The same applies to creating your own rally courses in the game to drive around. Perhaps in a future game.

Of course, being a fan of some of Codies older catalogue I couldn’t resist the temptation to ask one final question before I left.

Will Dizzy the Egg ever make a return?
They neither confirmed or denied this, but I was told that the question has been raised in the office in the past and that Codemasters are looking into lots of different projects right now, but they’re not talking about them just yet. The impression I did get, however, is that Codemasters predominant focus right now is all about the racing genre as many of the staff on the team have their ‘motor head’ screwed on, and have done this for the past 12 years. My impression, walking away from the event was that this is their primary interest.

That said, it was a well rehearsed open-ended answer that left the floor open to interpretation.

Whatever the case maybe, Codemasters are all about DiRT 3 for the time being and the game looks to be the finest instalment in the franchise yet. The game is scheduled for a Q2 2011 release window and you should be very excited for its launch!

Stay tuned to the site over the next few days for my hands-on impressions with the game.