Since my initial 70 levels in World of Warcraft, I’ve been waiting for an MMO to leap out at me and make me give a damn about its content. Burning Crusade worked for me, but after only one play through of Wrath of the Lich King, I was finally done with an MMO that had absorbed over two years of my life, never to return.

Since then, I’ve tried to recapture the magic with other titles, trying my hand at Warhammer Online, Lord of the Rings Online, Star Trek Online and more recently, Rift. These were all fleeting affairs that never made me feel even an inkling of the spark that Blizzard’s behemoth had stoked for so long. It was at this point that I genuinely believed I was done with the genre for good, never to find any semblance of satisfaction in it again.

That’s until I was invited to The Old Republic Beta. Then, suddenly, everything started to change…

My issue with MMOs is the lack of care or consideration I have for both the character I’m playing and the needy NPCs who ask me to go there, do this and kiss their butt while I’m doing it. Everything feels like a grind without consequence, without thought and without care. MMOs have felt wholly soulless to me for some time because I’m used to the same dynamics, and they rarely change from release to release.

To be honest, I wasn’t expecting much more from The Old Republic. Sure, it’s Star Wars and that means your character is going to wield a lightsaber, and there’ll be a rich universe filled with lore at your fingertips, but Galaxies left me quite cold, and made me think that even Lucas’s mighty masterpiece can’t bring life to the genre.

I should never have doubted Bioware.

I’ve spent most of my playtime as a Sith Warrior, and for the purposes of this overview, that’s what I’m going to be focusing on, but I’ve also dabbled with the Jedi Knight and the Bounty Hunter classes.

To put it plainly, The Old Republic is the evolution of the MMO as we know it. For the first time, you’re going to care about the lore, you’re going to be more invested in the characters, and you’ll actually want to take heed of the stories. We’re not dealing with needy NPCs who spout out a paragraph of mumbo jumbo, just to get to a point of telling you to pluck an apple from a tree and stick it up your rear end, we’re dealing with people with emotions and feelings. They have their beliefs and thought-process, and you will need to make decisions based on your gut feelings, important ones that will define your character, structure the path you walk, influence people at your side and those who would seek to befriend or kill you. 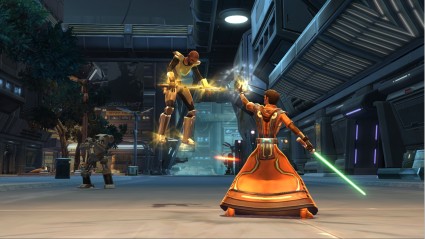 Sure, the core foundations of the MMO are in place here, but instead of feeling like a grind where you just do these things without thinking through the consequences of your decisions, TOR will challenge you. TOR will make you sit upright and actually care about what you’re doing. It will make you question if this is the right quest for you, should you help these people, should you leave them for dead or give them a new lease of life. You’re also not colour-coded or hampered by which alliance you pick, if you start as a deadly Sith Warrior with murderous intentions, there’s nothing stopping you from becoming overly noble and heroic as you grow and develop.

An excellent example of the impact of your decision-making comes from a quest very early on. Your character will be asked to pass judgement on three prisoners, all of whom have been captured for very different reasons. As a test to prove your mettle as a Sith, you will be asked to decide the fate of each of these characters. After listening to the captor telling you why each one was captured, you then get to hear the prisoner’s side of the story. From here, the decision-making process is up to you. You can either choose for them to stand and fight you in an honourable battle, to kill them outright or to leave them rot in their cell.

Once you’ve served as judge, jury and executioner, you then return to your master who will grade your performance, telling you if you made decisions according to Sith Principles. If you didn’t, he asks you to explain yourself, telling him what prompted your decision. The impact of this quest builds towards a later stage in the game where you will need to appeal to a Sith Lord, making sure you are working in accordance with Sith practices. Dependant on how you approach your quests, if there is a hidden-Jedi within; you may not find yourself in favour.

The beauty of The Old Republic, however, is that there isn’t just one storyline happening with your character at a time, there are several. Watching you progress as a Sith Warrior; you acquire an enemy who sees himself as your competitor. For the first ten or so levels of the game, you play this volleying slanging match with another Sith Acolyte, him bragging that he can take you down when he wants, you baiting him or trying to reason with him to refocus his efforts, until eventually the situation escalates and reaches boiling point. Only then, something’s got to give. 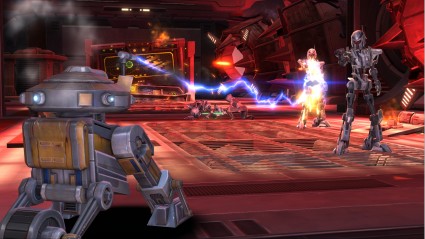 The environments are varied and colourful!

How does this all work in context of an MMO, you ask? Simple. Bioware have introduced something called a Story-Area, which is unique to every created character currently in the world. The world revolves around you, and every time you enter a certain section of it with your character (dependant on which class you roll, depends on which areas you can access) a story section will unfold. This can be accessed with your allies, (A.I. or Human controlled) but can only be viewed once per character.

This brings me to another important feature in The Old Republic, your followers. This is very unique for an MMO, and as such, makes the whole experience feel very different from its counterparts. Throughout TOR, you will gain certain followers, based on how you speak with people, how you’ve previously handled missions and based on your balance of Light and Dark qualities. Whereas some will be drawn to your sinister outbursts, others may identify more with a neutral who has not yet decided on their place in the world. Once they’ve joined you, as you go through certain missions, reacting however you see fit, your followers will comment, sometimes passing judgement, other times agreeing with you. Their affiliation with you will also determine how well they fight for you in battle, or if they’re on the verge of abandoning you completely.

There are also Flashpoint Sequences, which are wholly story-driven affairs, but can be accessed by multiple players. These are like mini-dungeons, but sewn together by a narrative arc. There are always nice rewards to claim from these as well, which will give the gear-focused gamer additional reason to jump in and experience for themselves.

I’m not going to be overly critical of the game’s technical prowess at Beta stage. This isn’t a finished article, and it would be unfair of me to pass judgement on something that hasn’t gone Gold yet. That being said, I have experienced regular slowdowns on the game, even when I am running it on the lowest possible settings. 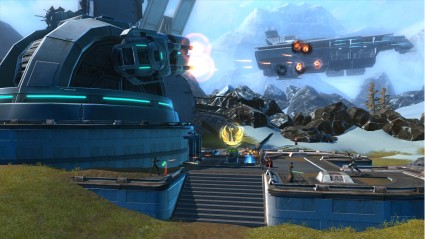 You'll visit all the familiar locations!

After speaking with the UK Bioware PR, however, I’ve discovered that there will be yet another massive patch this week, and these will be continuously churned out building up towards release. Bioware clearly want to get The Old Republic right, and have it ship in the absolute best shape possible.

If you take one thing away from this preview, it’s that Bioware have made an MMO, and they’ve tailor-made it into a style we all know and love, both from their previous catalogue of games, and from Knights of the Old Republic. If this game isn’t on your radar in 2011, it absol-effing-lutely should be! It’s taken over six years, but finally, we have an MMO that engages and wants to suck you into its world in new and exciting ways.

Even if this wasn’t a Star Wars game, and wasn’t rich with Jedi Knights and Lightsabers, with the conversation system Bioware have implemented, I genuinely believe that I would still be infatuated no matter what license they adopted, and I would still be singing this game’s praises. While the added Star Wars element of lore and gameplay is adored and appreciated, this is an absolute blast to play, regardless of that.

Forget Galaxies, this is the Star Wars MMO we’ve all been waiting for!

Star Wars The Old Republic launches this December. We hope to have a full review for you around then.