Now, I’m sorry, (and I hear from every developer that they don’t like to hear that their game is like other games…) but I have to say it. Brink is like a mix between Battlefield and Mirror’s Edge. That’s not to say that the game isn’t innovative. What we saw, and played, was an action-packed game full of jaw-dropping tricks. For example, yes, you could use the stairs, but in more ways than one. Who wants to use the steps and waste all that precious time that you could be using to plaster someone’s brains on the wall? Not me. So let’s run up the side of the stairs, grabbing onto the railing, cutting our travel time in half.

They called this the S.M.A.R.T system. It’s an acronym, however for the life of me, I can’t remember what it stands for. It does stand for something though, and that’s all we need to know. Basically, it’s a parkour element of the game. You use this simply by pressing down onto the L2 button (PS3) and holding it down for the duration of your inhuman jump or other spectacle. When commented on, the demo instructor told us that, “Around here, we call it the newb button”. The reason? Because while you’re supposed to hold it down for obstacles or shortcuts, I found myself holding it down the entire time. It was really just that awesome. 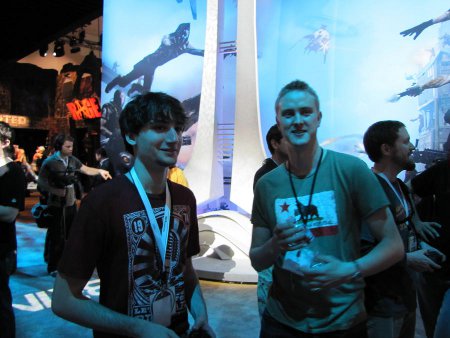 Guy from Bethesda walking me through 'Brink'.

Now, the rest of the game’s core elements are focused around the general first-person shooter genre. Hence, my Battlefield comparison. This doesn’t make it boring or old though, as with the parkour mechanics thrown in, it opens up a whole new toybox. What we saw so far in general, was the basic foundation from the hit indicators, to the gun bobbing as you walk. So, expect what you’d normally expect in this department, while keeping in mind that you can scale walls.

In terms of visuals, Brink didn’t necessarily impress me. It’s still the alpha build though, so it’s hard to say what exactly it will look like in it’s finished state. Knowing the guys at Bethesda however, I’m sure it will be fine. It’s a bit grainy now, but in my personal vision, I imagine a sleek and shiny game running at a solid frame-rate. Brink just lends itself to that sort of scape, and if you’ve seen the trailers, I think that’s what they are aspiring to as well.

Now, when I imagine it to be sleek and shiny, I’m not only referring to how the graphics will probably look. I’m also referring to how they will complement the environment. We were not shown any jungle-looking areas or slums (which will more than likely be present, when looking at the story-type), but in both the trailers and the gameplay we experienced, everything was urban. It was futuristic and downright quirky. This is going to be an awesome, unique game, and Bethesda has me waiting on the edge of my seat.

Special thanks to our friend Mark Robins of Bethesda Softworks for getting us in on such short notice.