When you consider developers who have some of the biggest key franchises out there today, one may or may not be surprised to know that Popcap Games are among others at the top of the list. With the likes of Bejeweled, Peggle, Zuma, Feeding Frenzy, Bookworm Adventures and Plants vs Zombies under their belt, Popcap have certainly garnered much attention in the industry and continue to create addictive, fun-loving games that keep us entertained for hours on end.

I had the rare opportunity to speak to Cathy Orr, European Director over at Popcap Games and ask her some questions about Popcap and its aspirations for the future. Amongst the questions I put to Cathy were the company’s opinion on the relationship between social networking and gaming and how important it will be in the future, Popcap’s perspective on Kinect, Move and 3DS and are they considering any titles for the new hardware and how did the unusual concept for Plants vs Zombies come about?

Q. Thanks for taking the time to talk to us, Cathy. Firstly, I have to ask, who came up with the idea to mix Plants and Zombies together in a game and how? It seems like the most unlikely combination possible and yet you’ve managed to make it work together so well…

“George Fan, Senior Designer at PopCap, had just finished PopCap’s Insaniquarium, and was noodling around with some new game ideas, one of which was a more defence oriented sequel to Insaniquarium. At the time he was also playing some tower defence mods in Warcraft III and thought “What if I used plants as towers? Plants are great because you can give them lots of character, and no one expects them to move”. So out went the fish, in came the plants. Around that time, however, a plethora of gardening games appeared in the casual games space so rather than blend in, he decided to come up with an usual mix in form of plants and… zombies. He was pretty sure nobody else would be working on such a combination! As it turns out it was a pretty compelling one!”

Q. Can you talk to us about any of your upcoming projects? Has there been any further word on when we can expect to see Plants vs Zombies and Zuma’s Revenge ported onto XBLA and PSN as well as any other of your titles that have yet to grace the formats?

Q. You’ve partnered yourselves with World Winner and allowed people to play your games for cash prizes. When coming to port your products onto consoles and handheld devices who are bound to many terms and conditions, do you further appreciate the freedom the online community can provide and wish there were changes in place to make such things more accessible within home consoles?

“PopCap appreciates the variety actually. When your audience is ‘everyone’, that’s a lot of wish lists so we do our best to provide as many varied gaming experiences as possible to cater to the wishes of as many people as possible. Some people want to play at home on their PC with their kids, some on their phone on the way to work, some against their friends on Facebook while others want to incorporate a different aspect of competition afforded by our agreement with World Winner. PopCap’s job is to make fun games and make them broadly available for people to enjoy, but we don’t insist that one size fits all and we can appreciate different gaming platforms and the different gaming experiences they offer.”

Q. We’ve seen an increased interest in bringing games onto social networks and playing in web browsers with the rise in popularity of Mob Wars and Farmville, and yourselves recently bringing Bejeweled Blitz to Facebook. Do you feel that playing gaming in this way could be the next step for the industry?

“Absolutely, social gaming is a very exciting space to be involved in right now, and still in its infancy in many ways. Bejeweled Blitz is PopCap’s first foray into social gaming and it’s doing phenomenally well. We are now looking at adaptations of our other classic franchises for the social space; as well as looking at some more experimental ideas that would be designed specifically for the social space.” 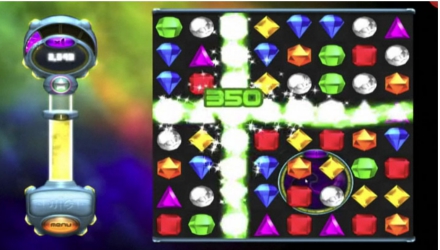 One of Popcap's classics!

Q. What do you feel is key to making your games infinitely replayable? Can you give us some insight into the secrets of PopCap’s success?

“PopCap start by asking “do WE like playing this game?” We invest time in enhancing the industry and consumer’s casual game experience, prioritising a superior design process and spending about 2x/3x as long developing and polishing each game as anyone else in the industry. It is expensive but results in extremely high quality games that set PopCap’s offerings apart from other casual games and make them truly special and memorable, and hopefully nearly infinitely replayable!”

Q. Your games are very replayable in their own right, but I’ve also noticed that you try and implement some story in there to try and give the game further illustration, such as the story behind the Peggle Masters and their secret ambitions and desires in Peggle Nights, or the story of Bookworm Adventures 2. Is story important to Popcap and do you feel it will continue to play a part in future games, perhaps more prominently than before?

“We, are always learning new things about how players interact with our games, and trying to incorporate that back into the next title. Often, I think these narrative naturally occur ; we are passionate about our games and for many of us, the characters take on lives of their own and we kind of owe it to them to tell their stories! In terms of development, PopCap starts with a core game concept, builds a quick prototype, and then refines it, over and over and over again, until it’s really fun. Then we polish it until we think it’s ready to be called a “PopCap game”. We don’t write huge design docs, and we are willing to kill a game at any stage if we don’t think it’s working out.”

Q. Many developers have begun working with the iPad more and more, with you introducing Plants vs Zombies HD to the format just recently. How did you find developing for the iPad? Was it easy to develop for? How do you rate it as a playable portable format?

“As a developer, the iPad offers the same easy development environment as the iPhone but amps that up with great technical specs and a potentially whole new way for somebody to interact with a game. PopCap believes the iPad has the potential to kick start a whole new wave of creative innovation similar to the wave kicked off by the launch of the iPhone and iPod touch. We are really enjoying the possibilities it presents in terms of development.”

Q. With the recent announcements of the Playstation Move, Microsoft Kinect, the 3DS and the continued compatibility of the Wii, do you feel Popcap products could benefit from this hardware and have you been considering possibilities for each respective format? Can you visualise your games being played in 3D or being controlled through voice recognition and full body movement?

“We just launched our first WiiWare game, Bejeweled 2, in North America. I don’t have official plans for any of the others but I have learned to never say never for PopCap. Things move fast and you just never know when there might be an opportunity for us in one of these areas. We won’t do it just to be ‘trendy’; it would have to actually make our games more fun or a different gaming experience.

We don’t have immediate plans for 3D versions of our games. Beyond flashy effects, there’s not a lot that 3D can add to a game like Tetris, Bejeweled, or Solitaire; they are 2D games at heart. In fact, one could argue that “dressing up” a game like Tetris or Bejeweled would only detract from the simple, unadulterated fun the game offers, for example by making it harder for the new player to quickly grasp the core concept.” 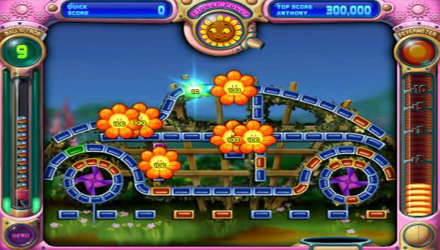 Q. Have you considered allowing the community to mod some of your games, perhaps shipping your games with level editors and enabling players to share their finished ideas with one another, such as Valve have implemented in Left 4 Dead and Half Life? Would this be detrimental to the companies overall vision?

“Again, we never say never. Back in January, we released a level pack for Peggle Nights, which featured five all-new levels based on the top entries from a Peggle Art Contest. Going forward, we hope to provide our customer base to create content for our games in more direct, integrated ways; but that’s a fairly long way down the road at present.”

Q. Have you drawn influence from any games or entertainment media for any of your titles, whether reading a book or watching a film?

“Absolutely. Influences come from anywhere and everywhere, from everyone in the company. From Bookworm Adventures to Peggle and Plants vs. Zombies, you can find video game and other pop culture references sprinkled throughout our offerings; sometimes you have to squint to see ’em 😉 “

Q. I had a crazy idea one time to make a musical version of Peggle and wondered what it would turn out like, and it definitely had something to do with Ode to Joy. Have you ever considered bringing any of your games from the computer screen to the TV or movie screen and which do you feel would plead the most interesting case?

“We have increasingly heard this question; particularly in relation to Plants vs. Zombies. It’s certainly interesting but I think it would have to be something really special… the zombies are complete divas!”

Thanks to Cathy for letting us take up some of her time and we look forward to all of PopCap’s future endeavours.

You can find plenty of PopCap coverage here at This Is My Joystick, with reviews of everything from Bookworm Adventures 2 to Plants vs Zombies.