Well, Alan Wake is now back on the menu it seems. The PC version has just come out (reviewed here) and now Wake is back fighting the darkness on Xbox Live.

This version takes more from Tarantino than Stephen King, and is way, way shorter.

The nightmare continues
American Nightmare picks off from the end of The Writer DLC, with (spoilers) Alan still trapped in Dark Place and his evil doppelganger Mr Scratch breaking out to bring his own taste of darkness to the world. American Nightmare actually takes place inside an episode of Night Springs that Alan had written when he was on the writing team, long before the events of the original game. Wake now has to find out what Mr Scratch is doing in the dirt around Night Springs, Arizona and stop it.

First of all, this isn’t Alan Wake 2. Whatever happens in the story, it isn’t the main way Remedy is taking the franchise forward. However, the story is, much like the first game, excellent. It just keeps pulling you forward, teasing you along with the plot.

However, you visit each of the three areas really quickly and then a plot twist makes you go back to them a total of three times each. Admittedly, you aren’t doing exactly the same thing each time but it’s still a little boring and feels a bit cheap, especially on the final go round. However, it is a downloadable game and so the amount of work makes sense. In addition, I kind of like the idea they were going for.

Alan is back; his writer's scarf isn't.

I also love all the little side bits such as the manuscripts, tv and radios shows. I love Mr Scratch as a bad guy; he is filled with a sense of evil and mischief that the Dark Presence in the first game never had. The acting of the FMV sequences around the plot is great and a real reason to play through the game.

Back to the Flashlight
If you’ve played Alan Wake, you will instantly get the gameplay. In fact, it will probably feel like putting an old glove back on. You still need to burn off the darkness from enemies via a torch before attacking them and you still can use flares and flashbangs as area effect weaponry. The main gameplay changes only really affect your weaponry and your enemies. I also noticed that the game seemed to never really limit the amount of pickups. Unlike the first game where some levels had you carefully using your allotted weapons and batteries, this game doles out ammo frequently, with combined ammo/battery pickups in every area. This game really lays on the combat and so adjusts itself to include that.

Many people’s greatest issue with the first game was the enemy variation. You only really fought three different types and all were defeated the same way, just changing how much darkness you had to remove and how many rounds it took to bring them down. American Nightmare adds five more enemy types which forces you to fight against them differently.

The swarmer, for example, will split in two if you hit him with a concentrated torch beam forcing you to deal with a horde of enemies if you try and take him down the normal way. The Birdman takes the bird swarms of the first game to a new level, using them to get around before sneaking up behind you.

Another new enemy type takes your flashbangs and instead uses them against you, forcing you to get up close and personal. The final bad guy is a huge hulking behemoth who will send you flying if he hits you.

They also added some spiders, because no game is complete without some evil spiders. None of the new enemies are too hard but they present a bit of variety to all the combat scenes. 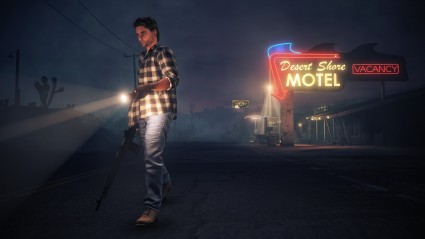 Once you check in you can never leave...

Another huge increase in variety appears with the new weapons. Alan Wake used a very small, select set of guns to make it fit into the setting of a small town in the Northwest. It was a great idea for the setting but was a little limiting in terms of the gameplay. American Nightmare adds in a ton of new weapons, ranging from a 9mm pistol up to assault rifles and combat shotguns. These help to make the combat much more interesting and nearly all of them are super satisfying. They also provide another incentive to replay the game and find all the manuscript pages, as many of the better ones require unlocking to use. It isn’t vital to unlock all of them as many of the lower end weapons can be found everywhere.

One of the main reasons for adding so many more guns has to be the new arcade mode. In it, you play as Alan in a selection of different arenas where you must last 10 minutes until dawn breaks. The Taken are merciless in this mode, moving quickly to flank you and hit you hard as opposed to the bad guys in some other survival modes. You need to dive around looking for weapon boxes, which are all unlocked by finding manuscript pages in the campaign, so make sure you play through that first or else these missions will be quite difficult.

There are four of these at normal mode, but each is also available as a Nightmare variant, where the area is crawling with Taken rather than the usual waves. Overall, the combat changes make these a rather fun addition, but the fact it’s a single player experience means there is less inclination to replay them.

Nightmare-ish visions
Remedy has once again used the same engine that Alan Wake ran on. It does the job very well, the game looks good overall with a focus on the lighting and shadows. Like the first game, the characters that Wake talks to during the missions have some animation problems, which can break the immersion. Worse, because the game repeats the same three areas three times, the game even uses the exact same animations for the characters Alan meets three times, not bothering to sync the voice-acting on them. Personally, I think this is terrible.

However, the visuals used in the rest of the game make up for it. As I mentioned before, the cut-scenes is as good, if not better, than those used in the original game. It’s a joy to watch Mr Scratch and his madness. 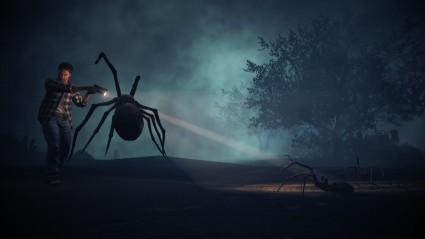 Yep, add this to the list of games featuring Spiders.

Balance slays the Demon
Sound played an important part in the original game and that’s the same here. Voice acting is stellar for Wake and Mr Scratch, although many of the other characters are infinitely forgettable due mainly to their terrible voice acting. The Taken also murmur at you as they attack, much like in the first game and some of their lines can be great. There could be some more of Barry Wheeler’s voice actor, though, who only appears in the radio show, which is one of my favourite parts of the game. Another voice actor I love is the narrator, who perfectly captures the whole Twilight Zone idea this episode aims for.

The music is integral as well. Kasabian’s Club Foot is a vital plot point and suits its role to a tee. Other music is also great from the background soundtrack, to the new licensed tracks, including a brand new Old Gods of Asgards song, which is just fantastic.

Is it truly a nightmare?
I really enjoyed my time with American Nightmare but it was pretty short having burnt though the campaign in a single afternoon. That said, there is quite a bit of additional gameplay if you enjoy the arcade mode.

It’s a great game but I’m not so sure about recommending to people who didn’t play through Alan Wake. As such, while I personally think it’s a must buy, I find it hard to recommend to everyone else. I recommend giving the demo a try before you buy it.