After losing a battle to the Gods, The Lord of Hell has risen once more, and man, is he pissed. He’s been stripped of his flesh, has a stinking headache, and an insatiable bloodlust that needs to be quenched. Minions by his side once more, he intends to take back all he has lost… and find some ibuprofen along the way.

Arguably, Square Enix have produced the most unique, unusual Vita launch-title of the lot, in terms of gameplay and style.

In a launch line-up full of strong competition, does it even remotely stand out?

Give me your flesh

The story follows the former King of Hell as he aims to take back his throne and plot revenge against the Gods who have shunned him. You start out quite moderately, a meagre force of goblins at your disposal to throw at your enemies (which vary from giant, floating eyeballs, to gargoyles) but as you defeat more enemies, so your strength grows. Eventually, you will have the chance to command over 100 goblins to do your bidding at any one time, and the chance to forge a blade that will enslave the world.

As plots go, this one is pretty standard and wafer thin. Considering Square Enix’s heritage with compelling storylines and RPGs, that is quite disappointing. Sure, the game is filled with cut-scenes as you pass each level, but they only really tell you what you already know, and most of the time are just rehashed animated sequences with a slightly different script.

Regardless, the scene is set. Battle can commence. 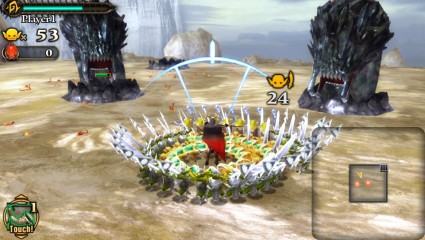 Your allies surround you!

Al-chem-me
Even though Army Corps of Hell is quite unique, it could be compared to the likes of Pikmin, Overlord, Brutal Legend and even Lemmings. You control the King of Hell, who is flanked by an army of goblins. Using the left analog stick, you move the King around the map and move the attack cursor with the right.

Once the attack cursor has been locked onto an enemy, holding in the right bumper will allow you to throw goblins to attack the enemy. Usually, you need to throw about twenty goblins onto an enemy to kill it, but occasionally a few more can sneak on, which gives you extra bonus-points for an overkill. While you initially start out with sword/shield clad greenlings, you’ll eventually be able to get spearmen and magi to fight by your side.

Unfortunately, despite how interesting it sounds, the gameplay is quite monotonous. Levels are split up into small, isolated islands, and you have to eradicate the enemy threat on each in order to cross over to the next. When all enemies on an island are defeated, a small bridge is created, thus allowing you to move on. It’s not just enemies you’ll need to contend with, however. There are fire traps, electricity conductors and other hazards scattered across the landscape which hinder your progress.

Fortunately, there are several boss battles in Army Corps, which are both the most satisfying, and most annoying area of the game. Starting off with Lord Gigadon, players will need to make note of the patterns and attack at the appropriate moment in order to ensure victory. The bosses are all very different from one another, and all can be defeated with a bit of patience and timing.

When this is achieved, the game doesn’t get any more satisfying. However, if you die, you’ll be forced to fight your way through the whole level again before getting the chance to fight the boss. Frankly, that aspect of the game will probably beat most players into submission, rather than the boss battles themselves. In that regard, Army Corps is almost as merciless as Dark Souls. 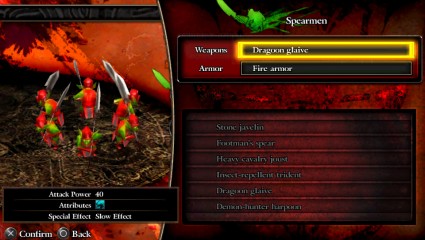 There are different types of minion!

Still, the strategic area of the game is still worth talking about, and one of the clever features in Army Corps is that you can have a mix of all three combat types in your pose, and put them into formations. So, you can set all of your warriors onto the back of a pesky gargoyle throwing things at you from the right, and then have your charging spearmen plunge a hole in another enemy attacking you from the left. It’s so easy to switch between goblin types as well, using either the triangle, circle or x button. Yet, while Army Corps of Hell does encourage strategy, hypothetically, you could wade your way through the game by simply throwing enemies all over the place without thought or feeling.

When you defeat enemies, the goblins can then harvest the dead bodies for components which can be used in alchemy experiments at the end of each level. The components depend on the type of enemy you face, and vary from a ground snake fang, to monster bones, even a cloudy lens.

The alchemy allows you to upgrade the weapon sets of your troops, improving the armor of your minions, giving them better swords, spears, spells and shields, but it also allows you to concoct specialist potions for use in battle. One potion in particular allows you to revive yourself if you fall in battle. The player will need to use the rear touch-screen and think of it as a drum, evenly distributing finger presses on the left and right side of the pad. In turn, this will determine how much life you revive with.

Another interesting area is loyalty points. Depending on how well you do in battle, and how far you progress in the game, your minions will become more loyal and bestow gifts upon you. One such gift appears early on, and comes in the form of a garb with improved recovery range. Then, throughout the course of the game, you’ll receive more garbs, and even a crown, which will not only change your appearance, but also come with varying properties. 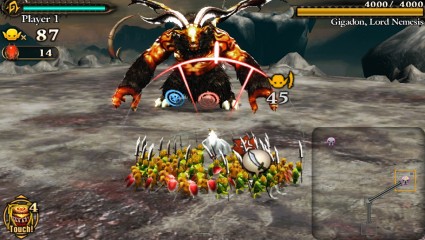 Boss battles are fun, but defeat will see you back at the beginning of the stage. Harsh.

Blood is blood
There are two things very clear about Army Corps of Hell. One, it revels in being as bloody as a Tarantino movie. Two, it’s the ugliest, most dated looking Vita game of the whole launch lineup. With unimaginative environments, blocky character models with poor animations, and a grainy color scheme; it’s fair to say this is not a showcase title, but it could have been, had we been reviewing this for PSP.

That said, the bosses do look decidedly epic on the glorious Vita screen, taking over with their all-encompassing frames. Much like the gameplay, seeing these bosses definitely helps break up the grind of the familiar, dull environments that take up 85% of your gameplay time.

RIIIIIIIIISE!
However, while the graphics aren’t much to crow about, the sound is. Army Corps of Hell comes complete with a rip-roaring death metal soundtrack, featuring a variety of artists. From full-on thrash, to slightly more upbeat, rifftastic tunes, Army Corps of Hell sports a diverse range of rage metal, and it fully supports the gory, hellish landscape you’re set upon. Although, I did find it quite humorous that the game is openly gory and violent, and the box even warns you there is foul language, yet words are ‘bleeped’ out in the music.

Still, while the game doesn’t show you the graphical capabilities of Vita, it certainly makes up for it with immense sound quality. 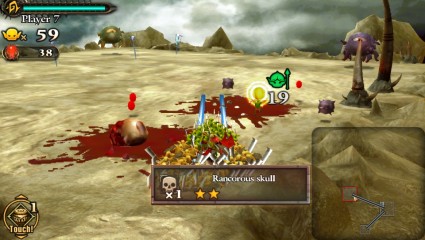 The spoils of war!

Ten-hut!
Army Corps of Hell borrows from a lot of great games, but meshes them together into something rather substandard. I couldn’t recommend this over other, must-have, Vita titles, yet ACOH is to be commended on how different it is from the rest of the line-up.

It’s pretty clear to see why this Lord of Hell got bested by the Gods, but at the very least, you can tell he went down trying.