Yep, it’s that game again: the ‘revenge against the Gods’ game. It’s been done a dozen times already, and here we are again with a new game taking a shot at the subject. Revenge has been driven into the ground by now hasn’t it? Perhaps it has, but if so, the developers of Bloodforge didn’t get the memo.

So why is yet another vengeance game worth any attention? Or is it? Though it may be the same idea rehashed, this game is still pretty fun, and good-looking too. In fact, one of Bloodforge’s greatest strengths is the new visual twist it puts upon the ancient ideas of mythology.

A world of myth and legend…

The game begins on an unfortunate day for our poor hero. Crom comes home from deer hunting to find his village under attack from strange enemies Crom recognizes from a dream. He leaps into the action to save his wife, whom he wisely advises to take refuge in a burning hut. Of course, in typical revenge story fashion, his advice does no good and Crom ends up killing her by mistake.

The story never becomes very engaging. It’s the typical ‘vengeance for dead wife’ tale, which has been told again and again in every medium. It’s not all bad. The dialogue is actually very smooth and fun, and the character’s banter is at least somewhat intelligent. It’s simply average.

A bloody good time
The game is two parts Devil May Cry, two parts God of War.  The levelling up system, which focuses on killing enemies to gather their blood, and ‘offering’ the blood to earn new moves, is very similar to the demon orbs method of DMC. The rank system, where the player is rated after every battle for how unique the fight was, is another DMC-esque system.

Bloodforge has a battle system with multiple layers. The first is focused around blood. The more enemies Crom kills, the more blood he collects. The blood is, first and foremost, a tool to use in battle. It fills the blood meter and can be unleashed to allow Crom to go berserk.  During berserk mode, he can rage-kill enemies in disgustingly creative ways. 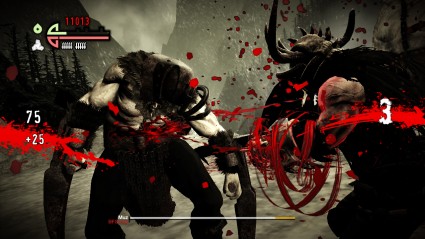 There are also other, more magical methods such as Rune powers. These are bought with blood offerings. By offering the blood, Crom earns the support of a specific God or God’s abilities, and can use them in battle.

For the simpler ‘Crom smash’ method, the player must mash buttons to keep combos going. This is a game which rewards button mashing. Hitting ‘X’ and ‘Y’ repeatedly and in different combinations leads to different moves, but the important part is to continuously tap the buttons without fail.

The camera can be wonky, especially during scripted battle scenes which show Crom tearing his enemies apart. Sometimes the player sees this from over Crom’s shoulder; sometimes they see it from under a rock wall twenty feet away. There is also an issue with jumping in battle. If Crom leaps too close to an enemy, he can become caught on their head. This can lead to Crom floating midair for ten seconds as the player curses as the screen.

Myths in HD
In this world, the colors grey and red dominate. A cloud-laden, mutely coloured landscape runs from horizon to horizon and that monotone is only broken up by blood. Every battle Crom has spills even more blood upon the ground, so that the player is eventually running through a dimly lit, dark world, leaving bloody footprints behind. 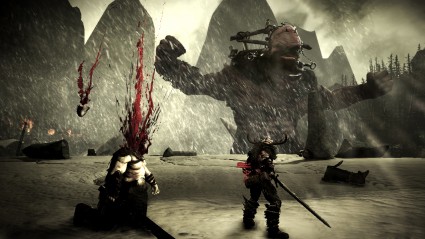 It would almost be scenic... y'know, without all the blood.

The designs in the game are gorgeous. These concepts have, of course, been covered a hundred times before, but Bloodforge has a grittier, dirtier feel. Enemies are truly grotesque and gods are intriguing and aloof. The art itself is one of the better points of the game with concepts that include a nice mix of mythological influence and new inspiration.

The songs of heroes
The game opens with a robust and invigorating score that had me feeling pretty heroic myself.  The soundtrack definitely fits the epic feeling of being a warrior on a quest.

Though Crom is no Beowulf, the music at least is reminiscent of ancient heroes challenging ancient foes. There’s a lot of drumming and chanting. During battle, the music is more intense and metallic, adding to the blood rage that’s surely flowing through your veins. It fits the mood well.

The storytellers were right about you…
It’s a premise that’s been done again and again, but let’s face it: it’s a fun premise. It keeps popping back up because it’s really enjoyable when done well. Epic quests to kill Gods never get old. Bloodforge may not be exemplary, but it is a slightly different look and feel to the revenge quest. For 1200 Microsoft points, it’s at least worth a shot.