Despite its Christmas success story, Nintendo’s newest handheld has definitely raised its fair share of concerns. Not least of which is that it shipped in an unfinished state. Initial concepts of the 3DS were drafted to include two analog sticks, but for some reason Nintendo changed its mind midway through development, sticking with just one. A few months into the console’s lifespan, suddenly, the idea of two analogs turned out to be a good one (how about that?)

Introducing the Circle Pad Pro. Last week, the controversial accessory launched in the UK, with one retailer offering it in a bundle with Resident Evil Revelations.

Naturally, we all have our questions about the model, the most important of which, is this simply tacked-on tardiness?

The Circle Pad feels very smooth in my hands. It’s very curvy and well grooved, fitting neatly into your palms without grudge or complaint. For the first time, I felt in solid control of the handheld.

The analog is an exact replica of the one already on your 3DS, with the Circle Pad Pro measured precisely so both analogs are in-line with one another. As a result, the feeling of using the two in synchronisation feels smooth and natural. Equally, the buttons are so conveniently placed that the need to stretch your fingers awkwardly to execute the simplest of moves is gone.

An example of this can be found in Revelations. Without the Type D control set (only available for Circle Pad owners) you can’t help but wonder how different your outlook on the game would be. That being said, the button placement is out of proportion, as the 3DS now has three buttons on one shoulder and two on the other. This is an odd decision, and one I somewhat doubt will make it to the 3DS Version 2.0. 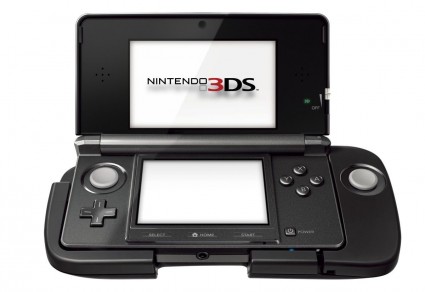 Didn't just fall out of the ugly tree and hit every tree on the way down, but was abused by the entire forest.

It’s hard not to think about version 2 of your 3DS, because, well, the Circle Pad Pro looks like something only Quasimodo could love and it’s no longer a practical fit in your pocket. Also, if you have anything other than a black 3DS, its an utter eye-sore as Nintendo have opted for just the one colour scheme.

Another odd decision is that the Circle Pad Pro comes with a wristband just like the Wiimotes, just in case, you know, you decide to waggle it around like a sword. I guess this could be useful for people who aren’t used to the fit and feel of the 3DS with the add-on, but it feels wholly unnecessary to me.

The battery life is said to last over 500 hours. I will be honest and say I’ve not had a chance to test that yet, but so far, it’s held out on me. Stupidly, however, this doesn’t improve the battery life of the 3DS console, even though they’re clipped together, which is still a rather pathetic four hours with 3D maxed out.

While the Circle Pad is ground-breaking, and dare I say, essential for 3DS games, it really isn’t very considerate of the rest of the handheld. Once the pad is clipped, you cannot pull out your stylus, adjust your network connection, use the back camera or change your cartridge unless you unclip it. It also makes it very difficult to adjust the volume slider. Decisions like this make you realise how much of an afterthought and rushed design the Circle Pad Pro is.

Equally frustrating is that there won’t be any backwards compatibility with some of the poster releases already on 3DS. I know games were designed from the ground-up to fit one analog, but we’re in a digital age where patches and fixes are readily available. Two analogs with Mario Kart would work a charm, as I’m sure they’d fit well in Mario 3D Land, and Ocarina of Time. Alas, these games won’t ever benefit from the dual-analog treatment, which is more than a bit irksome, and makes them feel like half the games they should have been.

In fact, going back to play any game on the 3DS without the Circle Pad already feels quite alien.

On the plus side, it does seem that most major 3DS titles will support the Circle Pad Pro going forward, with Metal Gear Solid 3 Snake Eater and Kid Icarus Uprising already confirmed to make use of the peripheral. If Revelations is any indication, the Circle Pad Pro will do as much to enhance 3DS games as any other feature on the handheld.

In conclusion, the Circle Pad Pro is exactly what 3DS games needed, and they will be of a higher standard and better quality because of it, but for the time being, the Circle Pad Pro is a stop-gap. It’s a temporary fix that isn’t overly accommodating or considerate of the 3DS model it’s clamped onto. Playing games in 2012 without it will prove to be difficult and off-putting, but by embracing this add-on, you’ll have an even greater desire to trade in the old model for a new one when it inevitably releases later this year. To get the most out of your 3DS right now, reluctantly, I have to advise you to purchase.