Just six months later, the sequel, Goodbye Despair, carries on right where its predecessor left off, and while it very much follows the same patterns of what came before, it provides another irresistible adventure.

Before I get into the review proper, I feel it’s pertinent to say that if you haven’t played the first Danganronpa and you’re interested in this series because you’ve seen me and umpteen others rabidly excited for this sequel, then you categorically need to play that first. You can check out my review here.

Danganronpa 2 follows a new set of students as they enter the world’s most acclaimed school, Hope’s Peak Academy. The school is famed for taking only the best in the world, those considered the ‘Ultimate’ in their field regardless of how niche their expertise may be – but as those who played the first game will already know, things aren’t quite as rosy as they might look on the outside.

The group of sixteen are all knocked unconscious as they arrive, eventually waking to discover that they’ve been taken to a tropical island. Even more concerning, it appears to be the work of a robotic plushie rabbit named Usami, who claims to be their teacher and is encouraging them to be the best of friends. All seems to be going well until the familiar, evil face of Monokuma ousts Usami from power and offers the students only one way to get home – they must kill another student and get away with it in the subsequent class trial. Unlucky for the classmates, then, that Monokuma is excellent at providing murderous motivations…

It’s another perfect setup for the series’ absorbing mix of character development, investigation and logic spotting. 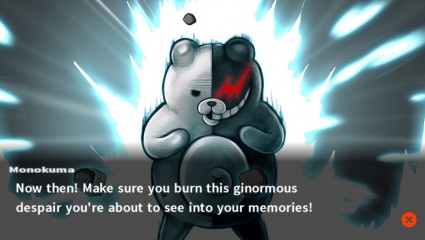 The first question I had when approaching this sequel, however, was whether the characters could be remotely as good as those in the first game. I mean, I spent so long getting to know them and second-guessing them, that I wasn’t sure the original group could be topped. Thankfully, the new group are just as likeable and, dare I say it, even more complex. Much like in Persona, you get to know your school buddies by choosing who to spend your spare time with, and this is where Danganronpa’s structure messes with you. Just as you think you’re getting to know the group, a killing takes place and pulls the rug from under you.

When a murder does occur, you’re given time to investigate the crime scene and nearby locations to obtain ‘Truth Bullets’, which are basically the pieces of evidence you’ll use to determine the grisly chain of events. Once you’ve discovered them all you’re whisked to the trial chambers, where you must prove that one amongst your number had wilfully murdered another by spotting contradictions and logically joining all the dots.

Generally, you do this by literally shooting down incorrect statements with the appropriate Truth Bullet or presenting the right evidence when asked, though there are a couple of ways in which this is presented via mini-games. Returning systems like Hangman’s Gambit and Panic Talk Battle (formally Bullet Time Battle) see gentle evolutions that make them more challenging, while new additions like Rebuttal Showdown and Logic Dive (which is, oddly, a snowboarding mini-game disguising a multiple choice question) round off a strong selection, as weird and jarring they might seem initially. Once, as a group, you’ve categorically proven who the murderer is, plus their means and motive, you’re left to piece it together in the Closing Statement by filling in the blank panels in a manga comic.

To explain it like this makes Danganronpa‘s setup sound like a bizarrely disjointed experience but, as much as I hate the old cliché, it’s much more than the sum of its parts. Class trials are always exciting, tense, high-tempo affairs, resulting in thrilling courtroom drama that sees truths out, lies exposed and plots twists you could never expect. As crazy as the different components sound, they all slot together purposefully, and there’s a rhythm to Danganronpa’s madness which absolutely works and just as well in this sequel. 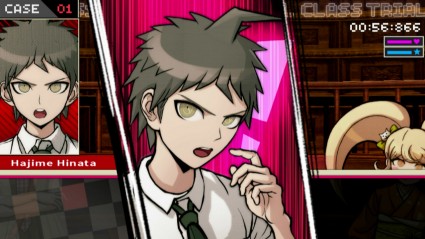 If there are grumbles that could be levelled at Danganronpa 2, it’s the same complaints from the last game and will, ultimately, come down to personal tastes. Being a visual ‘novel’, there’s so much dialogue to wade through, and though it’s nearly all brilliantly written, those that aren’t keen on reading are going to have a bad time, especially in what is a pretty slow start. The various modes unlocked after completion once again haven’t proven strong enough to hold my attention like the main campaign either.

Lastly, there are times when Danganronpa 2 will gleefully exploit its characters sexually in attempts at titillation, be it through provocative imagery or innuendo and, even taking into account cultural difference, it can feel remarkably awkward and, at its worst, outright creepy. However, I should state that it’s never without cause – everything that you’re shown is for a reason and even the most awkward moments play a major role in the story, even if you don’t realise it at the time.

With Danganronpa 2: Goodbye Despair, Spike Chunsoft have delivered yet another gripping murder mystery that is at least on par with its brilliant forerunner. Another group of interesting, complex personalities shines thanks to trademark quirkiness and a mischievous sense of humour, investigations and class trials offer many thrills and unforseen twists, while a new spin on the academy’s overarching secret offered more than enough promise to take me through to its amazing finale.

Simply, it’s a wonderful follow-up to one of the year’s most pleasant surprises. Fans should not miss this.