If like me, you didn’t have a Nintendo Wii at the time of Donkey Kong Country Returns’ original release, you’re in the perfect position to right a wrong if you have a 3DS. Developed by Retro Studios, this is truly a platformer in the classic Nintendo mould and it’s more than worth your time.

Almost everything Ray Willmott said in our original Wii review is still very much valid, so make sure you check it out if you want another point of view.

All is not well in Donkey Kong Country, as creatures from the Tiki Tak Tribe, newly awoken from recent volcanic activity, have not only hypnotized many of the island’s inhabitants but have also stolen Kong’s precious banana stash! For some reason, however, Donkey Kong is immune to their hypnotic music, and thusly calls on the help of Diddy Kong to rescue his beloved fruit!

Monkeying around
If you haven’t played Donkey Kong Country since the SNES/Gameboy era, then you’ll be delighted to discover that Retro Studios’ take on the big ape’s adventure is as solid and enjoyable as it was back in the series’ heyday. For those that have played the Wii version of Donkey Kong Country Returns already, then understand you’ll be equally delighted to hear that not much has changed in transition to the handheld. If you find yourself in that latter category, there is a 3DS-exclusive world with eight new levels for you to explore, so don’t worry too much about having seen it all before. Much like the base game, though, it’s all about navigating huge, gorgeous levels and jumping on enemies in that classic Nintendo fashion. 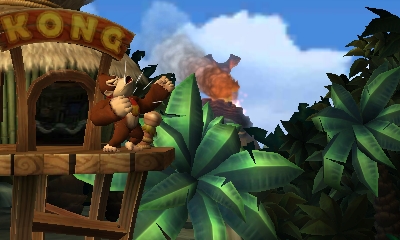 For newcomers, however, it might feel that Kong controls a touch too heavily at first, but DKC has always been about momentum. DK starts slow to run as you push forward on the analog stick, but his speed only increases as you continue to bound forward and maintain your drive. Suffice to say, attempting to jump great distances from a standing position is foolhardy and will almost certainly result in the big ape plummeting to his death or hitting one of the game’s many obstacles. With this, the series has always had this surprisingly quick pace as you haphazardly plough through the levels, twitchily jumping, climbing and swinging your way to the level end. It is 90s era platforming at its best; frantic, very unforgiving, and delightfully so.

There are many variables to Kong’s traditional platforming, however. Finding Diddy Kong hidden in marked barrels throughout the levels offers up a couple of advantages, for example. Firstly, just as Kong has three hearts per life, so does Diddy, and thus he provides another layer of protection against collision damage. Secondly, by holding the jump button while in the air, you’re able to glide slowly downwards using Diddy’s jetpack, which is invaluable for landing on those difficult platforms.

There are times when going on foot isn’t enough. Thankfully, fan-favourite Rambi makes his return, allowing you to smash through enemies and walls at great pace. He isn’t the only mode of transport, though, with the return of lengthy and infuriating but no less fun mining cart rides, and very twitchy rocket-barrelled flights; this game is as varied as any of its forebears.

Those with the compulsion to collect items will find their needs sated here. Alongside the standard bananas, you’ll be collecting the letters that make up the word ‘KONG’, balloons (extra lives), jigsaw pieces and coins. The last of that list acts as DKC’s currency, enabling you to buy useful items at Cranky Kong’s shop, such as more lives, power-ups or a key that unlocks secret paths.

Despite the game throwing lives at you at every opportunity and providing some checkpoints throughout levels, this is one hell of a challenging adventure with a steady difficulty curve. While you’ll fly through early levels with ease, it’s inevitable that you’ll get eternally stuck on many of the later levels. At times I was losing 30 lives or more in the space of 15 minutes as I tried to get beyond some of the more intricate portions. It’s never obnoxious in its challenge of the player, though; as much I was tempted to crush my 3DS in my hands through pure frustration, I kept coming back to it again and again.

Like recent Mario efforts, the game does offer some help, but it’s not as charitable as with the plumber. Die too many times and you can watch Super Kong play through the level for you from your current checkpoint, and while you can regain control over the action again at any point, his interaction means it won’t count toward any of your progress. It acts as a good way to see how you should work your way through a problematic section, however.

The boss fights at the end of each world are a terrific reward for persevering in spite of the game’s challenge, offering you lengthy battles that involve pattern spotting and weak points, though most disregard the age-old three-hits system. This results in fights that feel like those in 80s and 90s platformers, but in reality evolve a little differently as they progress. 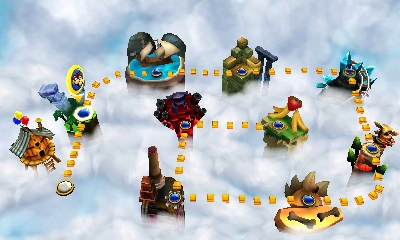 Gorillas in the mist…
While DKCR suffers with some jagged edges here and there, on the whole it’s a lovely looking game thanks largely to its bold colour palate. Bright colours, strong greens and reds especially are prominent, making the game look no less than bubbly and vibrant. Occasionally, Kong basks in the warm glow of the sunset and every element of the level is cast in silhouette, all except for the striking reds of both apes’ outfits. An interesting stylistic choice, but one that pays off beautifully.

There is one problem with the game in the transition to handheld, unfortunately. Here and there you’ll be fired into the far off distance to run across faraway platforms, and with the small screen of the 3DS it can be a little hard to spot platforms and enemies. Thankfully these moments are few and far between, but I did find myself cursing them occasionally.

Jungle beat
Any Donkey Kong Country veteran will likely prick their ears up as early as the opening level, thanks to the instantly recognisable nature of the original score. This handheld port keeps the remastered soundtrack from the Wii version of DKCR, and it’s the perfect accompaniment to DK’s adventures. All the sound effects here too are pulled right from the original DKC game; Kong’s grunts, the sound of hits on enemies, barrels being thrown; it really is a SNES owner’s dream.

Bangers and Mash…
Donkey Kong Country Returns on 3DS is playable cooperatively, but only locally and with another copy of the game. When review copies arrive I only ever get one, so it’s not something I could test. I’m sure it’s a lot of fun, though…

Should you return?
Donkey Kong Country Returns is a truly brilliant, classic-styled 2D platformer in which my only complaint could be that it treads ground too similar to the 1994 SNES classic. Considering that recapturing the fun and challenge of that era was Retro Studios’ goal and thus the game’s entire reason for existing, it’s hard to really call that a negative.

Unless you’ve played the Wii version to death and aren’t too fussed about an entire extra world, then I see no reason for you to ignore one of the best platformers for the 3DS since Super Mario 3D Land.