Fantasy dungeons filled with maleficent creatures, enchantments and treasure always make for a great set piece to base your game against. In that sense, Dungeon Defenders already starts off on the right foot.

Though is it a pace of a fast nature, or one that trundles and bumbles along, desperately clinging onto the butt-end of an ogre’s club in order to try to keep up with the competition?

Defenders of the Earth… Defenders…
In games such as these, the story isn’t the main focus. Dungeon Defenders won’t floor you with a tremendous, oscar-worthy script, nor will its narration cause firebolts to ejaculate from your eyeballs. That said, there is a story in place and it does, at the very least, go some way to try and explain the sequence of events so that they make some semblance of sense.

Four heroes have been united together to defend the world’s Arcania Crystals. Several of these are found in a castle, spread throughout a series of rooms including laboratories, treasure rooms and even the squire’s chambers. Before they begin, the player will get to choose their hero of choice, whether they be a Squire, a Monk, a Huntress or an Apprentice. It is their objective, as much as it is their sworn duty, to venture deep into the castle to protect the crystal from hordes of monsters from the underworld, including orcs, goblins, wyverns, ogres and even demon lords.

To do this, they place traps and defence mechanisms around the crystal in the hopes of keeping the opposition away. Fortunately, if the enemy should break through the defences, each apprentice has several unique-class abilities, and is more than capable of using them to handle themselves in a good old-fashioned fight. 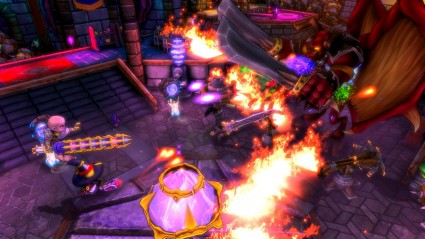 Build me up, buttercup
Dungeon Defenders manages to inherit the building style of a Dungeon Keeper, refine it to look as if you’re playing Torchlight, and then squish it all together to give you something that feels like Horde 2.0.

Really, it’s as awesome as it sounds.

Each of the four combat classes enable the player to do very different things. When swinging the sword as the Squire, you are effectively taking on the duties of a Knight: very proficient at hand-to-hand combat, adorned with a decent armour rating and above-average agility, and capable of releasing vile, nasty traps. Change it up to become an Apprentice and suddenly you’re firing ice-blue projectiles from a distance, and defending yourself with beacons of energy from the skies.

The game starts the player in one of several unique environments, spawning them next to the crystal. It’s up to the player to fortify his/her position, placing, amongst other things, spike traps, harpoon turrets, projectile towers or deflecting circles in order to make sure the crystal is not attacked and destroyed. Each defence is purchased via mana, which is collected either in chests or from dead enemies at the end of each wave.

This mana accrues and builds up the deeper you get into the game, and can also be stored in a bank to be used within a neutral tavern to buy better armour, weapons, and even pets. In the building phase, you can also change the equipment of your character, giving them better weapons and armour which you’ve collected, again from chests or fallen foes.

Once the build phase is finished and you touch the crystal, the game begins, unleashing hordes of the enemy out of the doors, heading directly towards you and the crystal. At this point you can either let your traps do all the work, thinning out the ranks, or if you’re a bit impatient you can dive into combat, working in tandem with your pre-laid instruments of mass destruction, and take them all out one by one.

Depending on how experienced with the game you are, each character class represents its own form of difficulty. So, where the game suggests you play as the Apprentice or Squire to begin with, it goes on to suggest that the Monk and Huntress represent a bigger challenge for the more proficient player. In addition to their own unique abilities (Monks can actually heal and use auras, whereas Hunters make more use of traps and pets) they can also lay their own variations on traps. This really does make the need for co-operative play (or at the very least, diversifying your attack strategy) a necessity.

While this all sounds fun, getting into combat with your character, especially the Squire, merited some frustrations for me. Dungeon Defenders does have an unfortunately questionable targeting system. At one point, you can be fighting a row of enemies in front of you, chopping through them with your sword like there’s no tomorrow, and then suddenly the reticule can hop on to an enemy to your right, and completely change your course and direction. While this can be quickly rectified, it is both frustrating and potentially costly in a life/death situation.

The style of play can also be a bit monotonous. It’s effectively the same game over and over, even though Dungeon Defenders cleverly introduces new elements all the time, such as new monsters, new perks via levelling up, new environments, boss waves, and even two crystals at one time. Even though the premise is effectively the same, DD expects you to change your strategy as no level layout is the same. In fact, when it comes to boss waves, you’re forced to use the environment to your advantage in order to survive.

On the plus side, however, there is also the Survival Mode to sink your teeth into, lots of tough trophies to obtain, and you can level your characters up to 70, as well as go up against others around the world on the leaderboards. Plus, once you’re into the game it’s very easy to lose hours at a time to it. It’s extremely addictive, and a fantastic co-operative experience. One of the best you can download from any online marketplace, in fact. 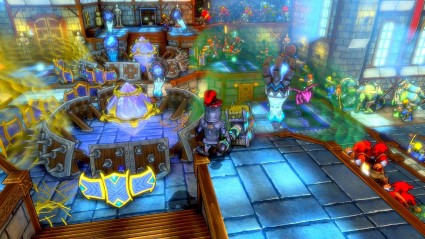 I ain’t no freakin’ cartoon
In terms of setting and style, this is probably closer to Torchlight and WoW than any other game in the fantasy genre. However, with its lovely hand-drawn animations, Dungeon Defenders sets a unique precedent for itself in terms of how it looks and feels. Whether you’re admiring the radiant colours or the look of the environments, even the design of the creatures which borders between cute and ferocious, Dungeon Defenders is real eye-candy, and effortlessly sends bedazzling lighting bolts through your irises.

Don’t misjudge it, though; DD’s cartoonification certainly doesn’t mean the experience is kiddified or dampened down. In fact, there’s little else in the genre that’s as sadistically satisfying as watching these abominations get victimised and decimated by your own wrath-induced creations. Sickeningly beautiful.

Feeling hot… hot… hot
The change in musical pace between build and battle phases is as appropriate as it needs to be. Suitably calm and subtle when deciding on a location for your spikes, whilst equally tense and enthralling when cleaving a goblin in half.

Dungeon Defenders is all about sustaining your attention, and with its sound effects as well as its music, it does everything to ensure you are made as comfortable as possible, whether you’re in the middle of battle, or deciding between a pair of gauntlets.

Go Co-Op or Go West
While Dungeon Defenders isn’t awful enough that you can’t play this alone, the insurmountable odds definitely pile on top of you if you’re without a wingman. Besides, communicating the setup before battle can be so genuinely satisfying that you’ll never look at the game in the same way afterwards. Working out amongst yourselves where one trap should go, and pooling your money together for the common cause, taking the left flank, while your partner takes the right, finally reveals the game’s true purpose to you.

This gets even better when there are four of you at the same time, working on your respective area of the map, making sure that the crystal is always defended. Dungeon Defenders not only comes to life when played with other people, it’s like missing half of the game if you don’t. With just one other person, let alone three, DD goes from being an entertaining past-time, to one of the most fulfilling co-operative experiences seen this generation. 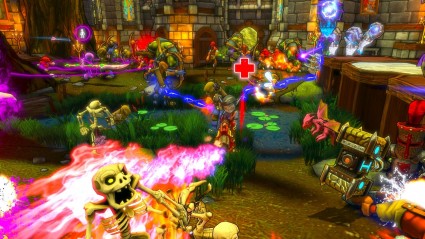 Should its honour be defended?
While this may seem like a mash-up of all your favourite games and game-modes, there’s an underlying brilliance about the way Dungeon Defenders brings them all together. You’ll care about that oversized, trouble-inducing jewel situated at the back of the room, and you’ll want to make sure that you’re doing everything forseeably possible to keep it safe from harm.

With such a strong emphasis on teamwork, feature-filled gameplay, continuously rewarded progression, cleverly designed environments, and genuine satisfaction in finding the most effective strategy, Dungeon Defenders is a jewel that fills you with joy the moment you experience it. A jewel that is as worth protecting, as it is preserving for this generation and the next to come.