Warren Spector and Junction Point Studios’ Epic Mickey was a bit of a flawed gem for the Wii. Offering a spectacularly unique take on Disney’s mascot, it was ultimately laden with control and camera issues. Its sequel, The Power of Two hit all major platforms earlier this year and although great efforts were made to fix most of the problems from the first game, the development team had managed to create a whole load more in the process.

Epic Mickey 2 now hits the Vita at a bargain price. Do Mickey and the gang fare any better on Sony’s handheld?

After the events of the original Epic Mickey, the Wasteland (home of now-friendly Oswald the Lucky Rabbit), falls victim to a number of devastating earthquakes. The evil Mad Doctor, at fault for the dastardly events in the first game, makes his presence known with a catchy song and dance.

He claims to be rehabilitated and pleads for Oswald’s help in repelling the creatures at fault for the tremors. Oswald agrees for the good of his people, but remains suspicious of the ‘good’ Doctor’s real intentions. There’s only one Disney character he can rely on as his insurance policy for this uneasy alliance, though, and thus he calls for Mickey’s return.

The story is fairly grim and twisted in almost a less-bloody and brutal Alice: Madness Returns kinda way, making for a nice contrast against Disney’s trademark cheery outlook. Their charm and optimism in the face of the darker story help to make it all seem that bit creepier, and its setting for me was the second strongest aspect of the game. Shame the rest doesn’t match up quite so well… 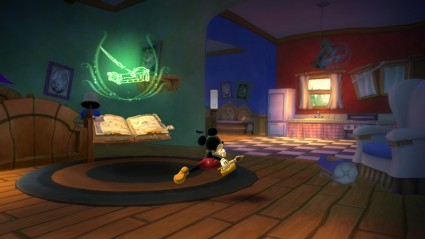 Dastardly duo
Before I go further into this review, Ray reviewed Epic Mickey 2 for us upon its original home console release and as many of his issues and points remain valid for this near-identical Vita outing, please check that review out for another perspective. My views don’t differ too much, however; The Power of Two is a very pedestrian platformer with technical hitches aplenty. At first glance, nothing seems truly broken, but the issues seep in quickly.

Its hook remains that Mickey, wielding his magic paintbrush, can paint in or remove elements of the environment to solve puzzles and find items. As per the home console release, the camera is certainly improved over its Wii only predecessor, controlling on the right stick, but aiming the direction of Mickey’s paint stream can be fiddly while you’re also trying to see around you.

Alleviating this a little is the Vita’s touchscreen, allowing you to simply touch whatever you want to paint over (be it building or enemy) and the stream will be directed there. It’s not as useful in the throes of combat, mind, having half your view of the enemy blocked by your own hand.

What it doesn’t fix is the clunky nature of the core platforming mechanics. Mickey runs and jumps with decent weight, but issues actually connecting with platforms can result in deaths beyond your control. Should you be taking a long jump, Mickey should grab onto the intended ledge if you’re just a fraction short, allowing you to climb or jump up. Often, however, this just doesn’t happen. Either he’ll grab the ledge and just plummet when you try to climb any further or he just doesn’t grab on at all, leaving his face helplessly scraping down the side of the ledge you wanted. 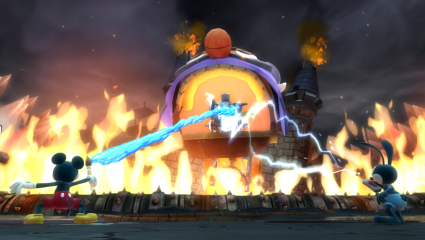 The true power of two…

In this game, of course, Mickey has Oswald accompanying him everywhere. He comes in handy with puzzles, especially when using his remote control to hack panels or power machinery with electric. His expertise surpasses the technological, however, able to spin his ears like a helicopter to help Mickey glide across large gaps or physically throwing him up to higher, otherwise unreachable levels. He will also act as Mickey’s medic, reviving him if he can get to the flattened mouse quickly enough.

Unfortunately, whether he wants to do any of these useful things seems to depend entirely on his mood at the time.

Many times I would be stood in front of essential panels for ages and Oswald would simply not start his automated process, leaving me running to different areas of the map and back to trick him into getting close enough. Another time I got stuck in some scenery (which was completely my fault; I probably shouldn’t have walked too close to that inanimate wall after all), which killed Mickey instantly. Oswald then insisted on continually bringing him back to life, leaving me in an endless cycle of dying and being resurrected.

On countless times throughout when I needed genuine medical assistance he was oddly missing, at one notable point just stood a few feet away with his nose pressed against a wall. One depressing extreme to the other; maybe he still has some hang ups over Mickey and their tussles in the previous game? Who knows?!

While the main quest is at least something approaching entertaining, it’s very occasionally hampered by terrible signposting. A few times it told me what my goal was but offered no indication on what I should do, other than repeating the same trite statements over and over again until I spotted the answer by accident. It also features the most mundane list of collection-focused side-quests, never interesting me enough to see many of them through to completion. Without those to keep you engrossed, the main quest is over swiftly and is just as quickly forgotten.

Thanks for the memories…
While the story and setting were something of a saving grace, my absolute favourite aspect came in the form of its design and attention to detail, with excellent fan-service ranging from obvious to subtle everywhere you look. The side-scrolling sections are the most obvious form of that, putting Mickey through his paces in levels based brilliantly on his classic cartoons from a bygone era.

In the normal stretches of gameplay too, it’s a joy to land on a platform, only to realise that it’s actually Disney memorabilia: a Donald Duck lunchbox, a Mickey plate or a playing card from Alice in Wonderland. Disney’s history is impressively seeped into every design element of the game.

From a technical standpoint, it also suffers very little in transition to the handheld, with the overall visuals looking just about performing sharply and fluidly, and there are no real performance-related issues to speak of. 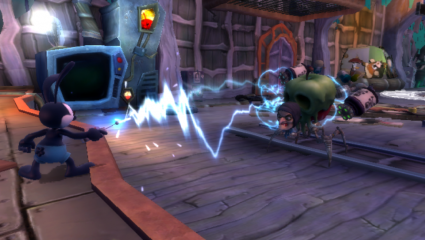 If only Oswald was really this useful in-game…

Hey Pluto!
Unlike the first game, Epic Mickey 2 is entirely voiced but, to be honest (and I’m probably in a minority here), I think I preferred the implied vocal work from before. I’m not entirely sure why, but Mickey’s classic tones in the performance here just didn’t seem to fit this particular interpretation for me.

Much to my surprise, the game is also something of a musical, with the Mad Doctor intermittently lifting the mood with a song in typical toe-tapping Disney fashion. It’s really hard not to like these sections in truth, as they’re just as catchy as the cartoons that inspired them. In fact, the music all round captures that classic Disney vibe perfectly.

Two heads are better than one?
Epic Mickey 2 on Vita can be played cooperatively, but only locally. Unfortunately, with only one review code and no nearby friends with Vita, this is a mode I couldn’t test. It’s at least a safe bet to say that a human-controlled Oswald will be ten times better than the A.I. controlled Oswald.

Epic? Pffft.
Although Warren Spector’s passion, eye for detail and the respect paid to the source material cannot be called into question in the wake of playing Epic Mickey 2: The Power of Two, it remains only a passable yet troubled platformer. The fact that this particular version is such a faithful port is literally its biggest problem; all its issues have carried over and only the inclusion of touchscreen aiming brings it anywhere close to offering an improvement on the original formula. The now-budget price is the only real reason to give it a look.