Mickey Mouse is arguably the single most recognisable cartoon character across the globe. As Walt Disney’s flagship character, Mickey has appeared in over 100 films spanning more than eighty years and around thirty video games across every major home console since the 8-bit days of Sega Master System and NES. It is perhaps a little odd then that despite this illustrious back catalogue Mickey Mouse is often seen as a poor man’s Sonic or Mario when it comes to the world of console gaming, with his games often being overlooked for the latest effort by Sega or Nintendo.

The truth, though, is that within this catalogue of past appearances there are some genuine classic games, not least the Sega MegaDrive trio of Castle of Illusion, World of Illusion and Fantasia. Just before Christmas, Disney Interactive Studios released Epic Mickey on Nintendo Wii as part of a wider effort to rebrand the character and add to the aforementioned classics. So the question becomes is it Epic Mickey or Epic Fail? Read on to find out.

The story opens when our loveable mouse wakes up in bed before investigating what turns out to be a magical mirror which leads to Sorcerer Yen Sid’s workshop. Mickey walks through the mirror and sees that Yen Sid is busy creating a world for “things that have been forgotten” with a magic paintbrush that appears to bring this world to life. As Yen Sid packs up for the night leaving his paint, thinner and magical paintbrush out (something every parent would have a complete fit about) our curious hero decides to investigate further. Mickey then splashes paint around inadvertently creating a Shadow Blot, a kind of dark monster and proceeds to knock the thinner over onto the painting. Mickey then legs it back through the mirror and into bed before he can get caught.

Several months pass before the Shadow Blot jumps through the mirror, abducting Mickey and taking him back through and into the magical painting (Wasteland). The painting is now a shadow of its former self and patrolled by the Shadow Blot and his Army. Mickey wakes up strapped to a table by an evil scientist and a character called Oswald, who we later discover was pretty much the king of Wasteland before the “Thinner incident”. The Scientist has created a quite remarkable giant robot with a single eye and a Swiss Army Knife, which is used to torture our hero before trying to suck his heart out of his chest with a plunger. Somehow Mickey breaks his restraints and escapes with a little help from a Gremlin called Gus, before setting off to reclaim this Wasteland armed with nothing but his wits and the magical paint brush. 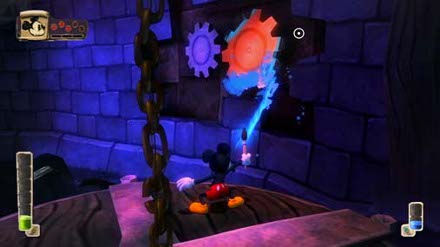 Paint gears to set them in motion.

Paint or thinner?
So that’s the incredibly mental story out the way then. Epic Mickey is a modern-day platformer that sees you navigate a largely 3D environment across multiple worlds, helping the Gremlin population ultimately restore the Wasteland. The game is played out as a sequence of quests that you pick up by speaking to various characters. Some of these quests are key components of the plot and are required to be completed in order for you to progress through the game, others are less important and serve only to earn you one of the collectible pins on offer, although completing them will assist with the overall game progression.

The quests are quite varied and include a mixture of timed races, search and find tasks and genuine puzzles to keep your old grey matter working. Some of these quests can get a touch frustrating as you find yourself going backwards and forwards to different characters, passing one object to the next in order to get something else which you then in turn pass to the next character. Also, although the difficulty level never spikes too high, there is a genuine frustration as the camera often gets a bit lost at the worst possible time leaving you falling off a ledge or just trapped in a corner.

Aside from the Pins you gain from completing quests, more pins, E-Tickets (used as the in-game currency), and Classic Film Reels can be picked up around the vast world that is Wasteland. The latter are found in the obligatory 2D sections that have you running through a scene from one of Mickey’s enormous back catalogue of films and are used to link the various areas within Wasteland. The Film Reel sections are fairly disappointing on the whole as they are really no more than a gateway, having you follow a very linear path simply to collect the film reel. 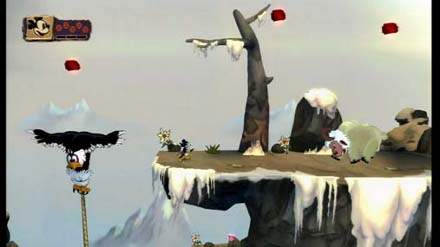 2D sections are pure history in every sense

The game is played with the Wii remote and Nunchuck add-on. The Nunchuck controls Mickey’s movement while the remote is used largely for actions. The A button causes our hero to jump and in true platform style can be pressed twice for a double jump. Pressing 2 takes you into the pause menu where you can review all your open and completed quests, a map and your current pin haul. Pressing 1 puts the camera into first person view and pressing C centres the camera behind Mickey, a function that is needed far more often than perhaps it should be.

The fundamentals of the gameplay are centred around your magic paintbrush, which is controlled by pointing the Wii remote at the screen and pressing B for a stream of paint or Z for a stream of thinner. Paint is a creative force that is used to add to the scenery, repair something that is broken (like gears or pipes) and turn enemies good, allowing them to work as your protectors. Thinner on the other hand is a destructive force that is used to remove parts of the scenery, often opening new passageways, break mechanical items or killing enemies.

In addition to the paintbrush, you can attack enemies with your primary spin attack, performed by shaking the Wii remote or by jumping on their heads, which stuns them for a short time. Throughout proceedings you will gain guardians, which are small fairy type creatures that serve to point you in the right direction and can also be manipulated as an additional weapon. Guardians can be blue Tints, which are gained by using paint and being creative, or green Turps gained by using thinner and being destructive. The Guardians can be unleashed in one of three ways: By holding the Wii remote upright you get pointed in the right direction. Pushing the Remote towards the screen unleashes a single guardian at your opponent or pushing both the remote and Nunchuck towards the screen together releases all the guardians at once.

Paint your way
Visually Epic Mickey generally sits towards the high-end of Wii titles. Within the general 3D level environments, colours are typically bright and environments have superb depth. The areas of interactive scenery are cleverly constructed and, in the main, are quite easy to differentiate, so you wont be spraying thinner at solid objects for five minutes trying to find a secret passage (often). In addition the 2D Film Reel sections, while extremely short and fairly basic, do capture an element of early cinematic cartoon, which is clearly the idea and it offers a nice contrast to the standard levels.

Where I have a small issue is with the cut-scenes. I have no idea why, but the developers have decided to show these in a grainy style with the view much closer and at a slightly funny angle. I can see no reason for this as it does not follow with any Mickey Mouse cartoon I have ever seen and is at complete odds with the rest of the game. 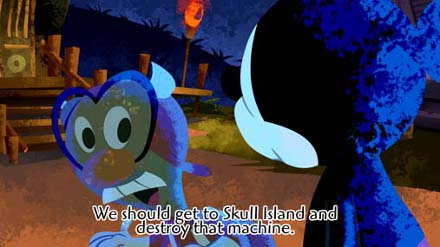 Trust me, this is from the same game

Musical mouse
The background score in Epic Mickey is pure Disney. Well orchestrated tunes set the pace as calm melodies increase in pitch and tone as you are faced with enemies. The sound effects are also delivered nicely, with a splurge as you spray paint or thinner, a whack as you strike an object or foe and a squeak as you jump.

Unfortunately Mickey doesn’t speak, something I am sure he has done since around 1929. In fact, there isn’t really any speech throughout. Instead, characters just seem to whine. This is somewhat annoying to say the least, with the most noticeable being the Gremlins who follow you around throughout and are by the far the most vocal of characters in the game. The “speech” can best be described as a cross between Higgins from Magnum PI with a heavy cold and a squashed cat. Not only is it terribly annoying but it comes through the remote speaker so turning it down is not an option.

It’s Epic…
Overall, Epic Mickey is a decent game. The levels are large and varied and the game progresses at a good pace. During play, the graphics and sound are both up there with anything else on the console and there is a good feeling to the whole experience. Unfortunately there are a collection of genuinely annoying problems which ultimately tarnish the game, such as the speech (or lack of it) and the visuals in the cut-scenes. Above all else is the most infuriating camera I have experienced in any game this generation.