Despite Molyneux’s departure, Lionhead’s focus remains clear. Lots more Fable, but not in ways we’ve seen it before. This year will see the franchise branch out in two very different ways, with one experience being solely dependent on Kinect, and the other, Fable Heroes, considering itself an equal to the likes of Castle Crashers.

It’s hard to believe that this is the same franchise which sees a dog following you around hunting for digspots, giving you empires to rule, families to maintain and treasure rooms to fill. Fable Heroes is refreshing perhaps, but is this really what we want for Microsoft’s flagship RPG series?

The beauty of Lionhead’s previous work with Fable is that they’ve created a massive world in Albion. From snow-peaked mountains, to barren farmland, Fable Heroes is as far-reaching and varied as its forefathers.

The game requires you to take control of a puppet in a team of four, fighting your way in a side-scrolling fashion through many familiar foes, such as Balverines and Hollow Men. Essentially, Fable Heroes boils down to a button-mash with cute button-eyed heroes clad in ridiculous costumes, decked out with oversized weapons.

“There’s plenty of games of this type on XBLA already” I hear you cry. The Simpsons came out earlier this year, and previously we had other Konami classics such as X-Men & Turtles, plus beloved SEGA classics like Streets of Rage 2 have long since rolled out. Simply comparing Fable Heroes to them, however, is unjust, and overly unfair. Fable Heroes does things that are actually quite unique to the genre, managing to add a lot of replayability at the same time.

At the end of each level, you’re presented with two very different paths to take. One usually leads you to an over-sized boss that will require teamwork to take down, the other path directs you toward a competitive mini-game. Mini-games vary greatly, from avoiding exploding chickens, to playing an arena survival game, even mine-cart racing. Fable Heroes likes to present choice and variety while still remaining faithful to a beloved fifteen year old fighting formula.

Once a level has been completed, players can spend all the money they’ve collected on an abilities board game. You take turns in rolling a dice, and moving your puppet piece around the board. Depending on which tile you land on, you can either upgrade or purchase many different aspects. Landing on one tile may enable you to change your puppets appearance, but sometimes, the reward is more substantial than that; potentially giving you a % increase in damage against a particular enemy, or even a brand new weapon.

What’s more, when Fable: The Journey is released, money can be transferred between the games, and you’ll also be able to unlock new items and characters in one game if you’ve played the other. 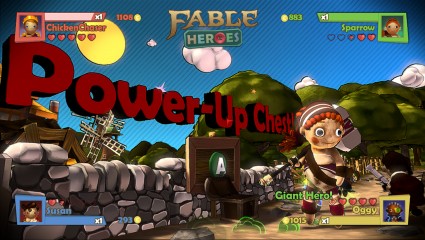 Power-ups are littered around the maps.

Fable Crashers
Fable Heroes is perhaps the most charming excuse for a side-scrolling beat-em-up I’ve played. It’s extremely difficult to feel frustration or anxiety while playing. In fact, whether you’re playing alongside friends or A.I., the whole experience feels quite relaxing.

FH is an extremely accommodating, pick-up-and-play title, allowing you to team up with random folk and friends on Xbox Live to make up a team of four, or playing couch-co-op. It’s even fun flying solo with a team of A.I., as they are, surprisingly, quite effective in combat, although they don’t take much of the gold or many of the power-ups, making it very easy for you to be Richy McRicherson at the end of each stage.

FH manages to mix things up with the combat by throwing chests and power-ups into the mix. You’ll have power-ups like Big or Small Hero, and Super Speed. However, each stage also has a Good and Evil Chest sat side-by-side. The power-ups inside these are different from any others you’ll find scattered in stages, and either have very positive or negative effects on your teammates. The chest will randomly choose which teammate to bless or curse their contents with, and then reveal their intentions to everyone on the screen. This still gives Fable Heroes light, competitive action, despite battling your way through against a common enemy.

Despite its childish outlook, Fable Heroes is a deceptively detailed game. Sure, it can’t match up to the RPG qualities of a Skyrim or The Witcher, but it adds a discernible quality to a well-established genre.

Final Fable
Fable Heroes bears a sort of cel-shaded appearance, something very different from anything we’ve seen from the series before. Fable has always had a charming exterior, endearing it to any whose eyes gaze upon it, and while Heroes is certainly faithful to that ethos, Lionhead have definitely tried to broaden their target audience with this XBLA instalment.

Regardless, this still looks like a Fable game. Each puppet is decked out with costumes familiar to fans, such as the King’s robes and the posh, eloquent squire who’s dapper with a pistol. However, the game also allows you to play characters integral to the series lore, such as Maze. 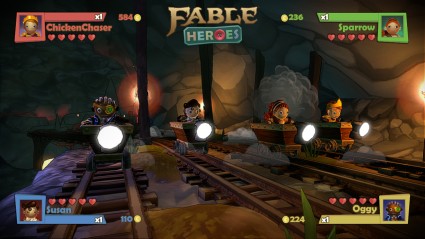 Mine-cart racing is one of the more interesting mini-games...

Fable Hominoid
Heroes has a very upbeat, happy-go-lucky score, that perfectly compliments the adorable characters and set-pieces. To some, the chirpiness could be grating, but in context of the game, it works, and loops along quite nicely in the background.

Fable Fantasy
The Xbox Live Support works brilliantly in Fable Heroes. It’s very easy to jump in and out, without the game penalising you either way, and it always feels very stable and without hiccup.

As you might expect, FH is at it’s best when it’s experienced with others, when trying to best your buddy in a mini-game, or preventing them from claiming all of Albion’s riches. While this may seem like a quick diversion when playing alone, with others, FH can quite easily become the focus of an entire evening’s entertainment.

Fable Zone
Fable Heroes may not be all we wanted from the series. While Lionhead have once again stayed within the lines of their franchise comfort zone, they have definitely tried something very different, and for the most part, it works. In short spurts, anyway.

It may not have the same finesse and replayability as other meatier XBLA experiences, such as Trials Evolution, but with a group of friends this certainly stands up as one of the highlights on the marketplace. At a bargain 800 Points, you get a decent amount of content in Fable Heroes, but once you’ve had your fill, you’re unlikely to come back for more.