George R.R. Martin’s fantastic fantasy series has taken the world by storm, thanks in part to the hit HBO series which debuted last year. With so many dynamic, unpredictable and interesting characters, coupled with a luxurious, beautiful landscape, the Seven Kingdoms has sucked us in with sickening virtuosity.

However, with a world so vast, a game is necessary to help fill some of the gaps in the lore. Enter Cyanide Studios and their RPG interpretation. A title that prompts incredible promise and expectation, but is this all we want it to be?

Not a stark in sight

The story takes place during the same time period as the first book, Game of Thrones. Jon Arryn, the Hand of the King Robert Baratheon, has been found dead in Kings Landing. In the book and TV series, Robert and his family head to Winterfell to stay with the Starks. At this point, Robert offers Ned Stark, the head of the Stark household, the role of Hand in his kingdom. However, the events of the game focus on two characters that are not under the guise of the great ruler.

Players follow Mors Westford and Alester Sarwyck through two very separate storylines at opposite ends of the kingdom. Mors is from a bloodline of knights who have long served the Lannisters, the second most powerful family in the realm. However, Mors long shirked this responsibility when he took ‘the black’ and headed to The Wall.

Mors is one of the best rangers in his order, and his story begins when he is forced to take the life of a friend who broke his oath. Mors has the reputation of a butcher among the order; however, he is left conflicted and uncertain of his role when he receives a letter from Jon Arryn, someone he hasn’t spoken to in fifteen years. Arryn leaves Mors a cryptic clue about his former family, which forces Mors away from The Wall and deep into the heart of the kingdom to learn some shocking truths. 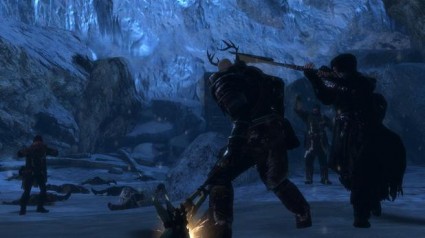 Locations will be familiar to fans of the show.

Meanwhile, Alester Sarwyck is the eldest son of a noble vassal family of the Lannisters (yeah, them again). Much like Mors, Alester walked away from his heritage and went into exile for fifteen years. During that time, he took on the vows of the R’hllor and became a red priest. However, after so much time away, Alester feels an urge to return to his homeland to trigger some memories.

When he does, Alester sees disruption on every street corner. Desperate, Alester decides to take it upon himself to take back the lands he once left behind and help bring prosperity back to them. However, this brings his responsibilities as a red priest into question, and soon he his torn between two allegiances, unsure of which way to turn.

You win… or you die
The story, which has been canonised by George R Martin, fits remarkably well with the lore; and thankfully, it’s the best part of the whole game. Unfortunately, it’s the gameplay that lets things down quite a bit.

For one thing, the combat system is basic, uninspired and completely haphazard. Players can develop their character via a talent tree, but most of the action is dictated by a simple one button press. Whenever you’re fighting, it never feels like you’re able to break the formula the game has set out for you, and you’ll always kill your opponent at its pace, regardless of the armor you’re wearing and the traits you use. Movement around the map is also quite clunky, and interaction with characters often produces buggy reactions, such as irregular clipping.

As you might expect, GoT acts in exactly the same way as most other RPGs. Fast travelling via a map; changing out armor and purchasing new equipment; selecting conversation choices; and accepting and completing quests. Thankfully, most of this plays out quite smoothly, and does make up for the droll, tedious combat system. Still, with these issues intact, GoT makes it incredibly difficult for you to completely lose and immerse yourself in a way you’d like. 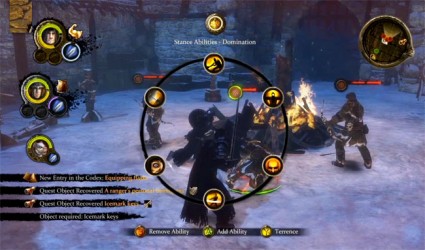 The combat system looks deeper than it is

The smallest man can cast the largest shadow
The look of the game is very hit-and-miss. When looking at a character not relevant to the story, or someone who has a limited acting role, it’s very obvious to everyone. They’re drawn half-heartedly, animated awkwardly, and completely devoid of any sort of quality control. Look at someone who stars in the HBO show, however, and you’re seeing an almost life-like interpretation.

The good news is that the Seven Kingdoms is actually quite beautiful and varied. The artists have spent a painstaking amount of time getting the look and feel of locations right, from Westeros to Kings Landing, and it shows.

War was easier than daughters
Unfortunately, for all the artist’s great work, much of the voice acting is completely under-acted and awful to listen to. It sounds like they hired people off the street with zero acting experience. To make matters worse, some of the dialogue isn’t well written, and probably not from the pen of Mr Martin.

The only highlight is that the theme from Ramin Djawadi has made it onto the title screen, and will bring a massive smile to the face of fans of the TV show. The musical score outside of that fits, but becomes very repetitive to listen to after only the second loop.

Winter is coming?
Game of Thrones isn’t the RPG revelation it could and should be. It’s good. It’s actually very good, but there’s as much to hate about it as love. The story will appease fans greatly, especially as it is seen as canon within the GoT universe. It’s just a shame the quality control wasn’t of a higher standard. As a result, it’s probably not a great idea for anyone but fans of the books/show to play this game. Otherwise, you’ll probably leave with a bitter taste in your mouth.