It seems to be the case that with every passing generation, games try to give us more – sometimes because we demand it, other times because it’s a tick to add to the list of features or another way to monetise the game. So we receive bonus modes, enhanced graphical fidelity, increased simultaneous players, bigger worlds and weapon selections, extra DLC stages, and of course fancy hats and horse armour to buy.

Whereas it’s sometimes nice to have more content than we probably know what to do with, not all games need to take this approach. Take OrangePixel’s Groundskeeper 2 for instance, which eschews complexity in favour of a basic and claustrophobically small 2D arena which you’re thrown into along with hordes of robot aliens, your sole objective being to shoot them all and gather their remains. What decade is this, the 1980’s?

The action takes place within the confines of a rectangular playing field in which you have but four abilities: move left, move right, jump, and shoot. There are no platforms, only one solid flat level in which robot aliens fall or otherwise spawn into and run amok as you try to mow them down. Your health is split into nine hearts which can deplete quite rapidly when overrun, but thankfully there are plentiful crates to break open which each hold an extra heart inside. Various deadly environmental hazards also threaten to take you down, such as airstrikes, missile launchers which fire at you from the sides and giant pillars which descend from the skies to crush you. 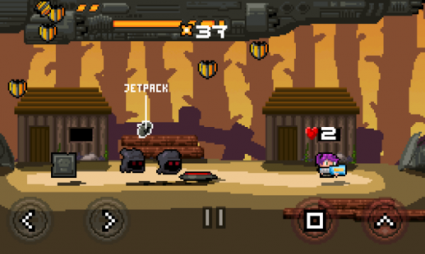 2 health remaining, and an airstrike and ol’ red-eyes incoming… this doesn’t look good.

As you collect enough bits and bobs (I don’t know what these are, either), you’ll open up portals and unlock new levels, weapons and powerups for subsequent playthroughs. Your starter assault rifle is functional enough but not overly powerful, so it’s always welcome to come across a laser rifle, triple-fire machine gun or ‘gangsta-style’ gun, even if their ammo is limited. Likewise, shields and wave-clearing lightbeams are very handy life-savers when the going gets tough.

With very limited direction, the only real objective within the game is to collect as many bits and bobs as possible, which acts as your high score. Constantly hopping through portals only cycles through the same levels over and over, so there is little incentive to jump in as soon as one becomes available other than the fact that your health is refilled each time. Rather than ruin my flow and travel to a potentially more dangerous stage, I usually elect to stick around in one level for as long as possible, only teleporting when my health gets critically low. Whether it’s the best strategy I can’t say, but it seems to work for me.

It’s quite easy to get into the groove of a battle during Groundskeeper 2. You cannot – cannot – stand still, so instead you enter a zen-like state of strafing left and right, almost constantly firing and picking up bits and bobs, hearts and power-ups along the way. The larger environmental threat and giant robots are lethal but usually telegraph their attacks with dust clouds or other methods, so they can often be avoided. When more than one giant robot or environmental hazard spawns at once, however, it can get pretty hectic considering that they can take up almost half the screen between them and you still have all of the smaller grunts to contend with. Sometimes when this happens and you’re getting pounded with missiles and other weapon fire you can suffer the odd near-instant death that leaves you feeling a bit cheated. 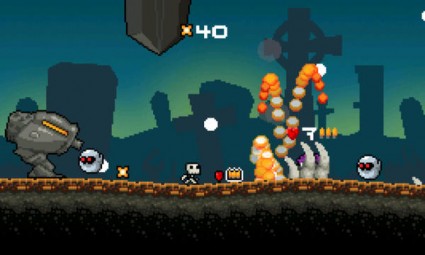 Groundskeeper 2 adopts the classic pseudo 8/16bit pixellated art style which many indies are wont to do, but this is no bad thing. Character models are rendered with blocky retro charm and the constant hive of activity happening on-screen keeps you bombarded with colour, explosions and stylish animation. If you played the original Groundskeeper then you’ll recognise the bouncy chiptune track which returns for its successor, although it’s had a little bit of a sprucing up this time round and is arguably even catchier.

OrangePixel have pushed the boat out with regards to platform availability, releasing Groundskeeper 2 on Android, iOS, PC, Mac, Linux, Chrome OS, and even Ouya and Gamestick. Unless you’re a luddite living in a cave you’ll no doubt have at least one device which supports the game, and that’s no bad thing. I tested both the PC and Google Play versions, the latter of which is available as a free ad-supported version and paid premium option. I did find the PC version a little buggy; it didn’t support my Xbox 360 pad, crashed if I entered the options menu and once I couldn’t get it to load until I restarted my computer. On the other hand the Android version ran as smoothly as butter, and with only four buttons to tap I didn’t find the lack of physical controls an issue. With its short play-sessions and miniature game arena it felt more at home on a small touchscreen, so this is definitely the version I’d opt for.

Groundskeeper 2 proves that simplicity can be a good thing, and successfully captures the addictive one-more-go mentality that, whilst not being sustainable for several hours at a time (it would probably fry your brain if you tried), will certainly fill your commute with multiple frenzied attempts at a new high score. With a low barrier to entry – even free in some cases – it’s an easy pick to recommend for action fans.