For me, playing Halo Combat Evolved Anniversary was a reminder of how far First Person Shooters have come in a decade. Admittedly, I sometimes take narrative arcs, physics and mechanics, multiplayer components and level design for granted, but reliving this Anniversary is the wake-up call I desperately needed.

Has this trend-setter aged as well as Microsoft would like to think?

Guilty Spark
Acquiring Halo was a massive one-two punch for Microsoft when it first launched the Xbox. Wrestling it from the almighty claws of Steve Jobs and Apple, Bungie’s franchise has blossomed into a world-renowned phenomenon that continues to inspire and evolve.

The story focuses on John, a Spartan better known as Master Chief, who is awoken from stasis to fight against an alien race known as the Covenant. Humanity are currently on the backfoot, having been at war with the Covenant for many years, recently suffering a crushing defeat at Reach. They are losing the war, and realise that in order to survive, need to get to the source of the problem, find The Covenant’s homeworld and strike-back. Falling back to their flagship, The Pillar of Autumn, humanity scour the galaxy for a solution. It is this desperation, however, that draws them toward their most important discovery to date, an enormous ring-shaped structure known as Halo.

The Halo-structure is worshipped by The Covenant, bringing together this unlikely band of aliens and Humanity soon learns that the reason for their aggressive attacks is because the Covenant see them as ‘defilers’ to their cause. With this new intel, Master Chief and Cortana (his embedded A.I. guide) decide to go in hot and aggressively pursue Halo to strike the biggest blow against the Covenant yet. However, as Chief soon learns, the galaxy has other, equally menacing lifeforms ready to strike at the most inopportune moments. 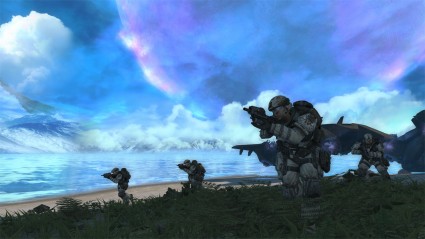 The fall of Reach
As a Spartan, Master Chief has an overshield which replenishes itself when out of combat. However, this overshield protects a health bar which depletes when Master Chief is hurt and his shield is down. In Halo 3, this health bar was eliminated altogether, but this system will be familiar to anyone who has played ODST and Reach.

Aside from this, Halo handles the same as any other title in the series, with Warthogs, Banshees and Ghosts available to the player, as well as a wide arsenal of weaponry from plasma grenades to Assault Rifles. What stands out about Combat Evolved, however, is the level-design. While there is a real diversity among the landscapes, thickened forests, beach strongholds, and inner sanctums, the levels themselves are enormous. They are broken up into small, chapter-like sections, yet still feel much the same as you delve through.

The Library and Two Betrayals in particular, are an absolute chore to get through. Certainly, the checkpoints are frequent throughout the campaign, but the look, feel and design of these levels is wholly dated, which, unfortunately, no amount of HD polish can conceal. Reliving some of these levels is something I will likely never do again after playing Anniversary.

That said the playability of the game is entertaining as ever. Combat in Halo always feels frantic and action-packed with grenades flying left and right, and heavy gunfire whizzing past your ears. The A.I. is also remarkably adept, using cover effectively, and darting out of the way. On occasion, they’re almost too efficient, which certainly makes for significant challenges on higher difficulty sets.

Halo allows you to make great use of all guns and vehicles with various scenes and scenarios practically tailor-made for their use. Unlike other FPS titles, Halo offers a wide array of Sci-Fi weapons used by The Covenant, such as the Plasma Pistol and the infamous Needler. These weapons still feel as refreshing and enjoyable in combat since the day the game first launched. The pleasure of sticking a Covenant with a grenade, watching them dance around frantically trying to get it off never gets old. 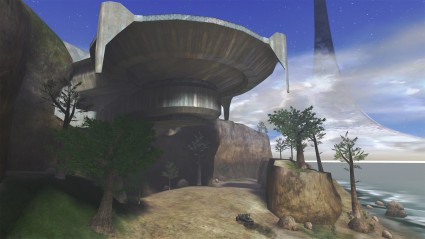 Everything has been textured up.

If looks could kill
The main reason for considering this upgrade has to be the HD repainting. 343 have done a commendable job of recreating Halo for modern systems, allowing players to seamlessly alternate between graphical styles, ala LEC’s Monkey Island upgrades. Yet, even with high quality visuals, the game still looks dated when compared with a Battlefield or Modern Warfare. It’s very colourful and the environment is believable yet other-wordly, but just looking at an allies face or body definition will tell you this game is several graphical paces behind the leaders in the proverbial pack.

Impressively, however, this is one of the few 360 games to support stereoscopic 3D. While I didn’t have a chance to trial this myself, it’s nice to see that Microsoft have started to include this level of support in their major-league titles.

Ah! The Demon!
Halo’s story is well narrated by its vocal cast. It doesn’t feel as over-acted as a Resident Evil, nor underperformed like others in the genre. The story always seems to be of the utmost importance and the actors treat it with the same level of respect. No matter how significant the plot twist, the reactions always seem spot-on. Whether it’s Cortana, Johnson or Master Chief himself, Bungie did a fantastic job of casting Halo, and everyone fits into their roles like a glove.

Who can forget the collage of vocal ingenuity for the Covenant? Elites growling as they charge at you, grunts squealing as they try to run away. Just from sound alone, it’s easy to tell what enemies are on the horizon, enabling you to prepare an effective strategy before you’re engulfed by an ambush.

Yet, the sounds of Halo are not defined by speech or grunting, but the majestic, energizing tones of a truly masterful soundtrack. Quite like other legendary games series such as Zelda and Warcraft, Halo’s music forces you upon a rollercoaster of emotion, with electrifying guitar riffs, to light-hearted piano indulgences. Naturally, with the HD spit-and-polish 343 have put on this game, Combat Evolved sounds completely crystal clear, and is perhaps the area of the game which benefits most from this upgrade.

343 haven’t stopped at just changing the existing formula, however. They’ve gone as far as to incorporate new technology into Anniversary, and activated Kinect Voice Commands. However, these aren’t quite the celebration 343 were hoping for, as they vary from quite useful to completely pointless. One voice command allows you to alter the brightness, whereas another allows you to reload and equip grenades. This support is disabled when you play in split screen, but it’s a cool novelty feature that at least tries to include the peripheral, and may make you feel less lonely if you don’t have a buddy to tag-team with. 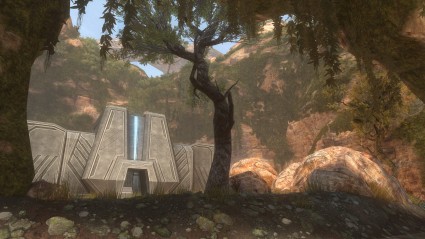 Beevercreek. One of the classic multiplayer maps!

I thought there was only one Master Chief?
Another first for the series is being able to play over Xbox Live. That includes the Campaign co-op and, of course, the online multiplayer. All games purchased at retail come enclosed with a code for you to download all the legendary Halo 1 maps for use in Halo Reach. For me, this was an absolute treat as I spent ludicrous hours with these maps years back, playing against my friends in split-screen.

We didn’t have the luxury of System Link then, so seeing these full-screen for the first time is incredible. I instantly felt at home on Battle Creek and Sidewinder, displaying a level of skill on Reach I hadn’t exhibited since launch! Of course, if you don’t have Reach, players can play Anniversary’s multiplayer from the main menu.

Additionally, there is a Firefight map set on Halo, which can be played on Anniversary or indeed, through Reach. This supports four players and does a great job of breaking up the action from the campaign or deathmatch.

Combat Evolved Anniversary also supports full campaign co-op, allowing you to play locally with two people and two of you over Xbox Live. This, for me, is where the game comes to life. Locally, the game is split horizontally, and offers players plenty of room depending on the size of your set. Online works well, but there are some stutters and lag if a player changes the graphical sets and occasionally, there are some achievement glitches which can cause people to drop. Overall though, this works fluidly and definitely provides the most bang for your buck out of the whole Anniversary package. 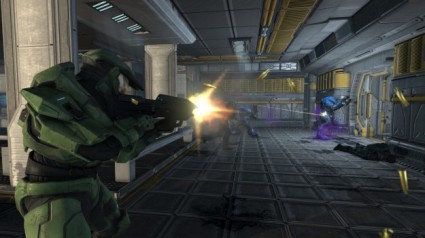 Combat is still as great as it was, but levels like The Library might grind you down.

Still the Chief?
Halo Combat Evolved is a dated game. The series has moved on, the genre has moved on, and frankly, it’s starting to feel left behind. Anniversary is a great novelty title, and is an equally thrilling experience for new and old players, whether they want to enjoy the multiplayer locally, over Xbox Live or jump into some campaign co-op, but it proves nothing about 343’s ability to handle the series now Bungie have moved onto other things.

Despite the spit and polish, the game’s age is still very apparent as you wade through some of its tedious and torturesome levels.

If you’re looking for a new co-op game with a wealth of content and new features, you could definitely do a lot worse than Anniversary, but this won’t fill a hole for Halo 4. It’ll just make the waiting even harder…