To those who’ve played Journey, whatever I write will probably seem hugely unbecoming. There is a magic and mysticism in this Sony Exclusive lacking in far too many games this generation.

Hard to believe it was made by just twelve people.

Journey is a very special and personal title for both thatgamecompany and Sony. For a small development team, this is a landmark achievement, a title that will soon define them. For Sony, they’ve finally reached the summit after a generation of experimentation. Due to losing an abundance of blockbuster exclusives from Playstation 2, they’ve been forced to push boundaries in new, ingenious ways, with the likes of Heavy Rain, Flower and now Journey.

Has their gamble finally paid off?

If our interview with Kellee Santiago didn’t make you a believer, perhaps this review will…

Freedom of speech
Not a single line of dialogue is uttered in Journey. The game isn’t completely silent; communication stems from grunts or high-pitched sounds, but naturally, you won’t understand its true meaning from the outset. Interpreting what is said, and the significance of those sentiments is actually a journey in itself.

There’s not much of a story to tell, both without completely spoiling the game for you, or cheapening the experience. Our view opens to sands sparkling underneath the radiant light of the sun. Everything seems so tranquil, no sign of life, and not a single monument in sight. For a moment, you’ll wonder if this is it; observing a game so graceful in its appearance, yet fearing its content as being so utterly nondescript. Then you notice a shooting star sailing past the sand dunes, its very presence both surprising and unexpected. You question its purpose and meaning straight away, realising it doesn’t belong, yet utterly transfixed on it all the same.

Intrigued, you follow its path as it soars across the sands, moving at the speed of light with unwavered purpose. As you whiz past sand grain after sand grain, more than ever, you start to realise the un-ending depths of this desert, and a pang of hopelessness chimes in the pit of your stomach. It seems larger than you could have possibly imagined, and traversing it in such extortionate, extreme conditions would be perilous for even the most prepared traveller. Where would one even begin?

Then suddenly, the comet stops dead when it finds a sole, red-cloaked figure sat meditating in face of the sun. The figure isn’t human, in fact it’s not a being we’d be at all familiar with due to its ice-white eyes and pitch-black face, yet in its survival we’ve already found some semblance of identity. Naturally, we have so many questions as the cloak and scarf of this enigmatic figure ebb and flow against the direction of the wind, but at the very least, we’ve discovered our reason for being here and for all intents and purposes, have our beginning. 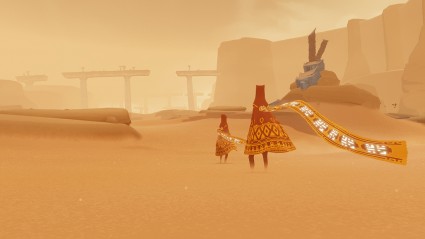 Multiplayer is never forced upon you.

Taking those first steps
Despite the vast open territory of the desert, Journey may be one of the shortest games I’ve ever played. I’m not a gamer that whizzes through content just to get to the end. I like to take my time to explore, look at my surroundings and learn as much as possible about the world around me. I approached Journey with exactly the same intentions, and still managed to beat the game in just over three hours.

Yet, after seeing the ending, I was instantly inspired to play it all over again. Having absorbed so much from my initial adventure, my thoughts and feelings about the game were drastically altered. In fact my outlook going into the second playthrough was completely different, and almost as if I were playing two separate games.

This is because the game never spells the story out for you. Animated scenes within the game do encourage interaction, whether you’re discussing them with a person in the same room, logging onto a forum or social media outlet, even if you’re just talking to yourself. Yet interpretations of the game will vary significantly, making each Journey very unique and personal.

When controlling Journey, the first thing you’ll likely notice is that the Sixxaxis allows you to look around the environment quite effortlessly. You can certainly use the right thumbstick if you feel more comfortable, but the tilt functionality feels very responsive and fluid when looking at the game’s décor. Naturally, the left thumbstick controls your character’s movements, and X allows you to jump and even soar in the air for a brief time.

Pressing the circle button also allows your character to communicate through shapes and musical tones. This is better used when encountering another traveller in your game, but I’ll touch on that a bit later.

Aside from that, there are several, unexpected, gameplay surprises in Journey that I won’t detail here. Those that have played it will agree with me, however, these sequences are extremely satisfying. Better still, Journey expertly prepares you for them without you even realising. The game never dwells on them long enough to spoil its own surprises, but when the time comes, you’ll know exactly what you need to do. 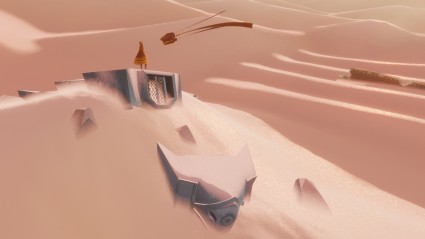 The desert is vast and lonely...

Gleam and sparkle
Journey is an absolute marvel to behold. Some may argue that the game is all sand and sun, but they’d be overlooking many of the subtle details, such as darkened landscape on the other side of the sun, or the wind picking up grains and whisking them around. Everything feels so animated and alive in the world of Journey, there’s no stoic or stunted motions. The PhyreEngine is truly magical.

The game doesn’t give you many objectives, but you’re never left wondering where you need to be or what to do next. While you may find yourself surrounded by a sea of yellow, in the distance, the game will draw your attention to a far off derelict building or a decaying monument. Further to this, if you leave the game untouched for a period of time, it will automatically pause itself, and produce a slideshow of images based on your surrounding area.

A virtue most welcome
While Journey doesn’t have any spoken dialogue; there is plenty of sound within the game. Instead of having a full cast, a greater emphasis is placed on elements that are mostly forgotten by gamers.

In the background, beautiful melodies are orchestrated which seem to blend trends effortlessly. Hints of Arabian celebration merge with uplifting violin chords. However, the game can produce a downhearted, melancholy mood equally well, with the guttural sounds of a trumpet and piano. Journey’s soundtrack is very free-spirited and experimental, and serves as the game’s primary indicator for every significant event, remaining orchestral until the very end.

Yet silence is just as important in Journey, and sometimes says more than words ever could. The game dutifully allows you to be alone with your thoughts, nothing but the direction of the wind spiralling out of your TV speakers to allow your mind to truly absorb all you’ve seen. 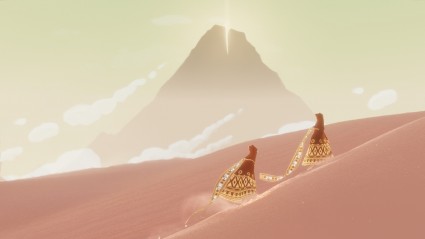 You never know who you're journeying with until the end...

Off the beaten path
Amazingly, Journey’s unique qualities have translated appropriately into the online realm. When first playing Journey, you’ll soon become aware of your loneliness. The vast open space and your singularity will feel incredibly daunting as you take your first steps. However, if you’re connected to SEN while playing Journey, you’ll be able to interact with others playing Journey at the same time as you.

Journey online doesn’t allow voice chat, nor are you able to invite your friends to your game, but rather than feeling limiting, this feels completely apt within the rules of the game. I can genuinely say that few online moments put a knot in my stomach quite like noticing my first online traveller on the distant horizon. In that moment, I felt more engaged and invigorated by online multiplayer than any headshot I’ve made in an FPS over the last five years.

The beauty of it is, you’ll always encounter a complete stranger, just as you would if making this trip yourself. Naturally, it’s entirely up to you whether you want to be sociable or not (the only way to do so is press circle, which produces a series of shapes and musical tones) or, should you feel so inclined, travel together. Journey never forces anything on you, yet manages to inspire a wealth of possibilities.

The incredible thing about Journey online is that you’ll have no idea of who you’re actually playing with. That mysterious traveller isn’t defined by a SEN ID. It’s just a person who happens to be travelling the same path as you. The whole online factor in Journey is completely mysterious, and equally exciting. 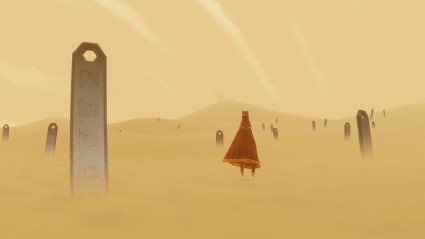 A road less travelled
Much like The Artist has changed perceptions of what is acceptable in today’s cinema; Journey will equally define a gaming generation.

You’ll find yourself crowing out theories as you traipse through the world, suddenly having an epiphany, thinking you’ve finally got some understanding of this world. Even when it’s all over, you’ll still be left haunted by its spectacle, yearning for more. Alone or together, Journey remains an unforgettable, incomparable experience.

Forget next generation consoles, Journey shows you what we’re capable of now, and doesn’t expose the limitations of its hardware to do it.

Want to win a Journey T-Shirt? Why not enter our competition here

Finished the game? Still unsure what it’s all about or want someone to talk to about your experiences? Visit our forums here