Sequels are a dangerous realm in the video game world. They can be an awesome, new and improved adventure which cements gamers’ love of the series; or they can be a stain upon the quality of the series, haunting the developers for years to come. The people behind Devil May Cry 2 know what I’m talking about.

So what about the sequel to LittleBigPlanet? Is it a sequel which honors its predecessor, or a game for fans to avoid at all costs? Happily, it’s the former. This is a game which improves upon the original and then some.

Drift away to the Cosmic Imagi-sphere

The game begins with a live-action video of the many dreamers whose imaginations make up LittleBigPlanet. It is here that the antagonist of the game is revealed: a vacuum. The irreverence and silliness is obvious from that moment onward, and leads to a lot of fun moments and belly laughs.

The Sackboy (or girl) is then introduced to a cast of amusing characters, including one based on a famous figure from video-gaming history. They team up to defeat the Negativitron and restore peace to Craftworld. In order to do so, the player will have to jump, grapple, and climb their way through six vastly different worlds, each with half a dozen levels contained within.

“Victorious yet pompous chuckle!”
Gameplay consists of traveling through creative platform levels based upon different themes, from sweets and baked goods, to space travel and science fiction. Each of these worlds also has a gameplay theme, which defines what the player does in the level. Some of these worlds focus upon saving Sackbots, while others are based around putting out fires.

There’s also a larger variety of collectibles to use and find, and a plethora of fun costumes for the “Sack thing” to wear. There are mini-game levels to unlock; some are single player, some multi-player, and some of them contain fabulous prizes for those Sackboys and Sackgirls who manage to achieve a super-high score.

The game also transfers DLC content and online content from the first game over. So if you bought the Metal Gear Solid costumes for the first game, don’t worry; your sack-person will still be able to run around as Solid Snake in the new game. 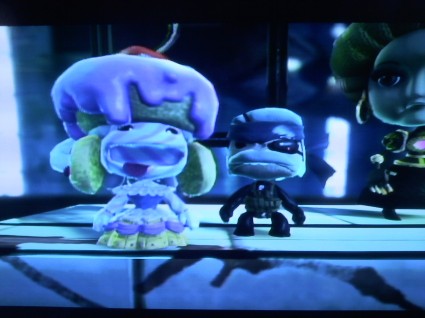 "That outfit is not conducive to a sneaking mission!" "Screw you, I'm a cupcake."

The greatest aspect of gameplay is the tools which the player works with. There are grappling hooks which give the player a Spider-man-like ability to fly around the screen, and robotic animal steeds which can be ridden through entire levels.

The first game mostly focused on completing levels which couldn’t be interacted with, but in the second, the player must interact with the world around them to move forward. Flipping switches, dousing flames, creating stairs out of cake, and defeating giant monstrosities are all part of making it through the story portion of the game.

In almost every aspect, LittleBigPlanet 2 is bigger and better than its predecessor. Levels are more varied and creative, bosses are more challenging and unique, and gameplay is everything that players loved about the first, with a bunch of new features integrated seamlessly into play.

The game does spend a lot of time teaching the player, though. The entirety of the first world of levels is a tutorial. Each time a new tool is introduced, a level is dedicated to teaching players how to use it. Outside of that level, the tool might be used once more in Story mode.

It feels like the game is advertising the different tools that can be used to build levels in the Creation mode. Within Story mode, however, this detracts from the time the player can spend actually using the tools. It can also feel somewhat repetitive or dull as they are, time and again, introduced to another tool and given another simple level to explore with it.

Oooh, shiny…
LittleBigPlanet 2 doesn’t just have improved graphics compared to the original; it also uses these graphics in ways the first didn’t. The new game has cut-scenes which develop the plot and add a funny spark to an already enjoyable game. 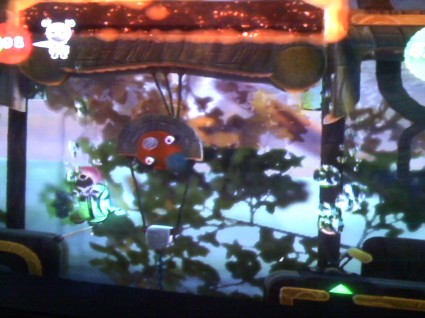 LittleBigPlanet's rendition of The Little Mermaid.

This is one of those games where players will be constantly distracted by the gorgeous scenery. Both water and fire are wonderfully animated in this game, and for the first time, Sackboys and girls can go swimming underwater in some levels of the game. It is truly visually stunning from start to finish.

Flight of the Sackthings
Listening to the soundtrack sometimes feels like traveling through video-game history; some of the songs are certainly inspired by 80’s era 8-bit. There is even an arcade in the spaceship portion of the game, which the player can mess with if they choose.

The songs of the original game were fun, catchy, and invoked emotions that ran the gamut of cheerfulness of the happy-go-lucky Sackpeople, to the heart-pounding exhilaration of a boss fight. The second game’s soundtrack follows in the first’s footsteps, but manages to be even more emotionally potent and heart-wrenching. The final two songs of the game will tear your heart to pieces and then have you dancing with a silly grin on your face, in that order.

Sack Party
Any of the levels within the Story mode can be played with friends, and some of them must be played with others to be fully completed. Certain items can’t be obtained without the assistance of a second, third, or even fourth Sack person.

Playing with a friend can be both fun and frustrating. Gameplay isn’t always as smooth when playing with multiple people. Consider the consequences of running away from Copernicus the guard turkey with a friend. When the player goes to grapple, the grapple accidentally hooks on their friend instead, dragging them down into the path of the evil turkey. They are squished underfoot, and the first player is likely to be squished next, since they were unable to use the grapple to get out of the way.

On the other hand, timed puzzles and mini games are much more fun with more people. It is easier to obtain high scores and to complete puzzles with quicker times. Though sometimes players get in each other’s way, playing the game with friends helps to complete more aspects of the game.

Until you dream again
LittleBigPlanet 2 is a game with character. Every aspect of it is full of life and meaning, but it isn’t afraid to make fun of itself either. It’s no Shakespearean drama, but it has heart; not to mention it’s a heck of a lot of fun to play.

From beginning to end, LittleBigPlanet 2 will entertain as the player escapes exploding spaceships, flies into battle on the back of a bumblebee, and defeats an evil vacuum cleaner. It’s not serious business… but it’s great for a laugh.