We made it. I don’t know how we managed it or what kept us going along the way, but we’re here. Mass Effect 3 has finally arrived!

It’s a game that comes with a ton of expectation and a lot of promise, but has also elicited its fair share of concerns. Step forward Multiplayer modes, Kinect support, greater combat emphasis. Over the last two years, Bioware have piled on the announcements, all of them frightening die-hard fans, rather than exciting them.

Of course, now I have the game in hand, there’s only one final announcement left to make. Is this the fitting conclusion we all want it to be, or did Bioware unceremoniously sabotage this memorable journey at the last hurdle?

Read on if you dare…

It’s been months since the conclusion of Mass Effect 2, and Shepard is back on Earth under house arrest. Despite the countless warnings about the Reapers, life on Earth and the rest of the galaxy seem far too relaxed. All that matters is Shepard worked with Cerberus and needs to atone for it.

However, when Earth starts to suffer from the destructive forces of the Reapers, the Council calls on Shepard’s for advice and experience. Finally keen to listen, and wondering what to do next, they call for Shepard to go back to active duty to stop the impending threat. Is it too late?

Naturally, the story of Mass Effect 3 goes much deeper than that, but I am keeping this section as brief as possible to avoid spoilers. Suffice it to say, you’re going to be blown away! 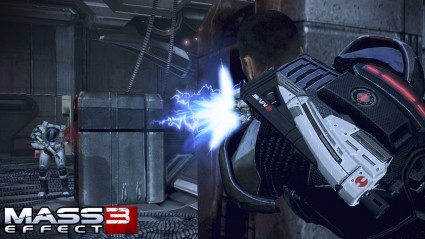 In a blaze of glory
Mass Effect 3 brings several big changes to the series. The key one being the combat. The cover-based system in Mass Effect has always been in desperate need of an overhaul since the beginning, and thankfully Bioware have recognised that. In previous games, Shepard had a tendency to keep popping out of cover like a mole waiting for a whack over the head with a hammer. This time, when you put him in place he’ll stay there. What’s more, Shepard can now vault over low-ground obstacles, sprint faster, and roll around to escape danger.

Another great feature is the weapon customisation. You can equip a variety of mods to all weapon types, including the cool down rate, ammo capacity and more. Conveniently, players won’t need to wait to find a weapons locker to change their loadout. Once they find a weapon in the battlefield, they can pick it up and make a change. This pulls the series back to the roots of the original Mass Effect, which is definitely for the better.

However, despite how much you can do with the weapons in the game, biotics are as important as ever. Using them in combination with weapons is the quickest way to bring down enemies, especially those with shields and barriers. To emphasise that, another new feature in Mass Effect 3 gives biotics and powers a mini-talent tree. When powers go past rank 3,  you can customise the output of the power, alternating between two options. Sometimes these focus on improved shield and health regeneration, and sometimes affect the overall strength and vitality.

Unique to the Xbox 360 version of the game is the Kinect support. It’s entirely focused on voice recognition and, incredibly, works an absolute charm. Its starts simply with you being able to interact with the NPCs on the screen, speaking out any of the choices in the conversation wheel. This adds a whole other layer to Bioware games, enabling you to interact with the games story as never before. Although, I found it peculiar Bioware didn’t identify a way for you to perform the impromptu Renegade or Paragon actions during a conversation.

Where Kinect really works, however, is with squad commanding. It works in sweet harmony with your Xbox pad, allowing you to play without pausing the action, shouting out commands to your virtual teammates. This radically changes the flow of the action from other versions of the game, and creates a very fast, constant pace. All fears of Kinect support can be allayed, this works wonderfully, and not just in Mass Effect, but surely in any cover, team-based game. It actually makes me wonder why this didn’t make it into Gears of War 3. Food for thought, Epic.

Where Mass Effect 3 truly comes to life is when a save game has been imported from previous instalments. You can certainly come into ME3 fresh without having played any of the previous games, but it’s the decisions you’ve made and conclusions you’ve come to in the series that truly give this game soul and purpose. Both in life and death. The squadmates that didn’t make it are commemorated by memories, war stories and plaques, and those that still live have grown, developed into their own strong-minded individuals. They’ve faced down the horrors of the galaxy, and carved out their own identities because of it. 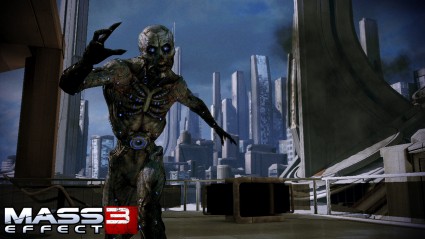 I am just a Husk.

Reap as you sow
Mass Effect 3 definitely has more gloss and style than its predecessors. Less of the grainy, dull colouring, and more pizzaz and vibrancy. It really feels as if there’s a Hollywood-budget essence that was missing before, surely a benefit of EA’s acquisition of Bioware. Burning buildings animated and ablaze in the background, Reapers tearing the sky apart, small vessels bouncing off them like ping-pong balls. Earthquakes ripping planets apart and battlefield’s stained in blood. The Reapers mean war, and are leaving devastation in their wake.

Yet, environments which have come to define Mass Effect still remain. The interior of the Normandy looks and feels as it did in Mass Effect 2, and while the Citadel has undergone a new lick of paint, it is still blessed with the same luxurious views. Mass Effect 3 feels like the science-fiction marvel we love and adore, but it also takes us to new places so we can explore exciting new territory.

The Arrival is now
Further to the Hollywood-esque feel of Mass Effect 3 comes a massive score from world-renowned composer, Clint Mansell. While this is probably a blow for some who love the work of original Mass Effect composer, Jack Wall, I can tell you that Clint has done a tremendous job. Famous for his work on films such as Requiem for a Dream and Moon, he has managed to give the game a series of glorious symphonies.

In many respects, I feel Clint has surpassed Jack’s work, as the music seems to have a greater purpose and presence in Mass Effect 3, where before it sort of muttered in the background. Each piece of music seems befitting of key action-packed and slow-paced moments. Magnificently done.

Naturally, all of the original voice-actors return to their roles. Seth Green is back as Joker, just as Jennifer Hale and Mark Meer have, once again, taken on lead duties as Commander Shepard. However, the series also welcomes newcomers such as Freddie Prinze Junior and Lance Henrikson. Oh, and Jessica Chobot.

Despite the new focus on action, Bioware haven’t forgotten what got them here. The talent always give a good performance and deliver their lines eloquently. Just as well, Mass Effect 3 has a solid, lore-driven, important and entertaining script that is as good (if not better) than anything else the company have ever done. 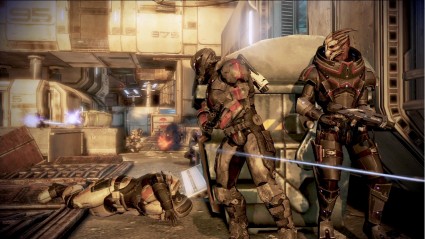 Eat Galaxy. Stop War.
Bioware have come under a lot of scrutiny for trying to attach a multiplayer mode to Mass Effect 3. It’s an experiment tried and failed with Dead Space, and one all-but forgotten in Bioshock. However, I can honestly say that the Mass Effect multiplayer is fun and, at the very least, a worthy addition to the package. True, you may not pick it up once you’re done with the Mass Effect story, but it remains a fun excursion all the same. Rewards reaped in Galaxy of War carry across to the Single Player campaign, and can help you turn the tide in the war against the Reapers. Don’t worry though, it’s entirely optional, and not at all necessary for Single Player progression. Bioware really weren’t lying about that.

In the campaign, you can scan planets for distress beacons, and fire probes at the planet in order to receive the signal. The reward depends on the planet itself. Sometimes it’s just a mass influx of credits, other times it can be prothean technology which can be used to upgrade your ship and weapons. These elements can also be claimed from your victories in the online component of the game. Quite handy, really.

The Galaxy at War multiplayer mode plays out like Gears of War Horde mode, but with objectives sewn in-between. The first few waves see you fight enemies of your choice, which could be Cerberus, Batarians or others, then you’ll be required to perform an objective while still fighting off the threat. The final wave sees you trying to successfully extract the area with all your team intact, whilst trying to survive a massive enemy presence.

Depending on your proficiency in combat, you will gain XP, enabling you to unlock new weapon and biotic types, customise your character and even change the base model. It works out quite well, and like Assassin’s Creed before it, proves a multiplayer mode can work in a wholly single-player Game.

Worth the wait?
Bioware have done the impossible. Not only did they successfully round out this epic trilogy with a thrilling conclusion, they made all the quirky gimmicks and concepts we were so worried about, work. Mass Effect 3 is all I wanted it to be and more.

Mass Effect 3 is a truly fabulous accomplishment, and one that will inspire generations of game designers to come. Shine up those Game of the Year awards ready, this galactic behemoth is dead-set on claiming them all.

Don’t forget to check our Mass Effect 3 thread on our forums. Lots of detailed, up-to-date-information and discussion on the game here