Based on the popular novel by Dmitry Glukhovsky, Metro 2033 was a game that I just never got around to finishing, partly thanks to reviews taking precedent and partly because it just wasn’t resonating for me in the time that I spent on it (Phil Ubee reviewed it for us, though, and thought it was decent). It’s fair to say it’s gone on to have a bit of a cult following since, and the buzz around developer 4A Games’ newly released sequel, Metro: Last Light, has been positive to say the least.

Is this an IP worth revisiting, though?

One year after he called in the devastating aerial attack that wiped out the mysterious ‘Dark Ones’, our hero Artyom has managed to settle back into his underground life as a member of the Rangers. Awoken abruptly one day, still groggy from his slumber, he is informed by his old friend Khan that a single Dark One managed to survive the lethal blast and, convinced they actually want to help the human race, wants you to reach out to it to make peace. Khan’s plan, however, is intercepted by the Ranger’s hierarchy, who want Artyom to distract the beast while their sniper makes its race extinct once again.

Of course, the meeting with the Dark One goes awry and, in the ensuing kerfuffle, Artyom finds himself a long way from home, taken prisoner by Nazis as they look to question his motives for the creature. With the timely help of an unlikely ally, he manages to escape and begins the journey back to his home of Polis. Travel through the metro system is never easy, however, thanks to the various rival factions and mutated wildlife that threaten to rub out his already uneasy existence. 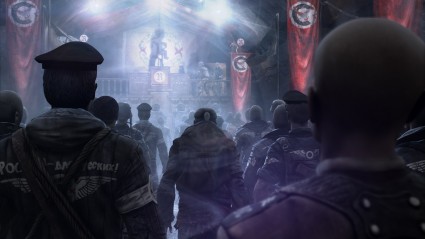 This game will depress you, but in the right kinda way.

The grim story itself is told a handful of different ways throughout, albeit with varying degrees of success. Much of it is told simply via in-game actions and dialogue, and while such a direction would usually prevent players from being ripped out of an otherwise rich atmosphere, Metro: Last Light is insistent on slowing you down to a crawl and forcing you to soak everything in, rather than subtly leading you to do so naturally. Others might not mind this so much, but personally I found it a little frustrating and indulgent. The rest is told by Artyom himself as he narrates his current situation at length during loading screens. This makes for an effective use of dead time and succeeds at keeping you abreast of your motivations throughout.

Regardless of any issues I had with the plot’s presentation, it’s impossible for me to deny that Metro: Last Light tells a compelling, if bleak story. It’s never quite gripping, though, and unfortunately didn’t quite grasp my interest as much as I’d hoped or expected until right near the end, but it’s one that’s worth experiencing all the same.

Not Russian around…
When you’re not having the back of your shirt tugged and being told to look at something, the game is mostly a joy to play through thanks to tight, responsive handling and a nice combat rhythm.

Much like the original game, Last Light’s combat is a decent blend of gameplay styles, mixing traditional, free-shooting action with frequent stealth-lite sections, and both work pretty well in tandem. The stealth sections in particular are a real treat, allowing you to skulk in the shadows, taking out human enemies swiftly and silently from any angle. In some cases you won’t even have to kill anyone at all. When you do have go in loud (or get spotted), the gunplay opens up brilliantly, with smart enemy A.I. pressing hard and trying to flank you at every turn.

While combat against other humans is both challenging and immensely fun, fights against the wasteland’s mutated wildlife are significantly less so. The problem is that no matter what the species, most of the time their only real attack pattern is to rush you great numbers from all angles. It results in this confusing backwards trudge as your screen fills with dirt and blood while you get battered around from all directions, and your only course of action is to unload your current weapon into whatever’s in front of you. It’s fine when it throws three or four creatures at you at a time, but stand-off moments are a bit of a mess. This is especially worse if you’re not keeping track of your ammo…

Ammo, of course, has two uses in the Metro games. The first is obvious; you put it in your gun and project it, high velocity, at what you want to die. The rare, pristine and more effective military grade bullets, however, serve as the underground’s currency, allowing you to buy the more commonly-fired degraded ammo, plus upgrades for whatever guns you’re carrying. I cannot stress the importance of keeping your ammo stocked up enough; more than once I was caught waiting for a lift or boat to appear while totally swamped by muties, only to have just a handful of bullets and crappy grenades at my disposal. Suffice to say, it makes life enormously difficult if you’re not well prepped. 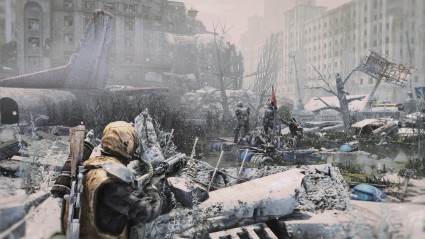 Excursions to the surface are rare, but very impressive.

The ammo isn’t the only thing you’ll have to think about though, as the game gives you a lot to manage. Many areas are toxic, for example, and require you make use of a handy gas mask. Not only will you have to keep track of filters for your mask or risk running out of air, but you’ll need to wipe blood, dirt and moisture off it at regular intervals, plus watch for signs of damage as you get swatted around in battle. With spending a lot of time in the dark, the power left in your torch is also something that you need to be wary of. Thankfully, rather than using batteries or other sources of power, Artyom carries a pocket generator that you’ll need to stop and charge often if you want to continue to see where you’re going. These are just a few of the lovely touches.

Others include the way the game chooses to mostly disregard its HUD; what’s left in a gun’s current round is clearly visible on the gun at all times, although a reload will bring up a reserved tally in the bottom right, just so you know how many rounds you’ve got left. Rather than constant hand-holding, trails or objective hints, you need to pull out Artyom’s lighter and journal which explains your objective and offers a compass arrow to follow as a general guideline. Time doesn’t stop when you’re doing this (or ever when in a gameplay menu), leaving you vulnerable every time you choose to navigate this way. There are times, however, where the vague compass arrow doesn’t feel enough, and the game doesn’t feel quite as well sign-posted as it possibly could have been.

Outlook is bleak
For the few aspects of Metro: Last Light I found wanting, I certainly can’t complain about its graphical fidelity. It is utterly gorgeous throughout with rich, dirty texturing, chilling sights and an insane attention to the most minuscule detail; all of which come together to match the incredibly oppressive themes. Inhabited areas are dank and dingy, but manage to feel homely in an uneasy sort of way, while out in the field the environment feels every bit as dangerous and as harsh as its ghastly inhabitants imply. The visual storytelling too is excellent, as you regularly come across the remnants of battles lost; the decaying corpses of soldiers or bandits who crossed paths, and small families clearly holding onto each other for dear life in their final moments.

The vast majority of the game, as the name would imply, is spent underground in the dark tunnels of the metro, but every so often you’ll be sent to the surface. While you shouldn’t expect those moments to be any more uplifting than the rest, it’s absolutely here where it really impresses visually. These instances do come few and far between, but it only serves to make their impact greater felt, as you get to witness first-hand the level of devastation that forced people to retreat underground.

In Soviet Russia, the guns fire you…
Metro: Last Light is hugely improved audibly over its predecessor; the general ambience is terrifying, even choking, while guns sound nice and chunky as you’re firing on your enemies.

In spite of some obviously mock Russian accents, the voice acting is solid overall, but only really with regards to the key characters. Sure, the idle chatter of NPCs aids the game’s atmosphere, but there is a lot that’s awkwardly delivered or just doesn’t fit the given situation. There’s a specific point that sticks in my mind where I’d crashed through a blocked railway line into a small community, and the few armed guards they had to protect them only chatted inanely between themselves, rather than raising their guns or acting surprised or threatened at my impromptu entrance.

There isn’t a lot of music other than sombre pads and tones, but what real music it has is reserved for the sole purpose of making you feel terribly sad. Occasionally when passing through settlements you’ll catch the odd song spinning on a record player; their post-war, morbid tunes reinforcing the feeling of sheer helplessness among the citizens in the metro system. Helplessness, of course, is a theme that Metro: Last Light aims for often and it rarely misses the mark. 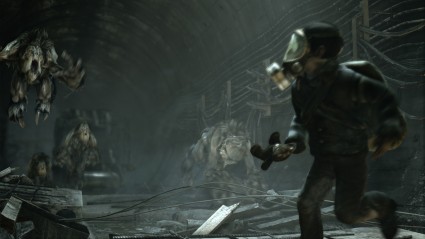 Young Artyom is in trouble…

Would you be Artyom mind to buy?
I find myself in a bind while forging my verdict as there’s a lot to like in Metro: Last Light, a whole lot; yet I can’t help but feel that it never truly came together as I’d hoped. The core mechanics are well and truly able, capably mixing stealth and balls-to-the-wall gunplay, but some portions feel so restrictive and narrow that it really starts to drag amid the sporadic flash of genius. Then you have this wonderfully realised, desolate and hypnotic world that’s so rich in atmosphere that you’ll want to breathe it in and explore, yet you’re constantly bogged down by the game putting the brakes on, taking away control and not letting you see its eerie delights at a natural pace.

Regardless of those issues, I enjoyed most of what the game had to offer, but while I am glad of the time spent navigating the dank Russian metro system, I have to stop short of recommending outright. A solid shooter, certainly, one that’s full to the brim of great ideas and has some spectacular visuals; but it never elevates itself to anything more beyond that.