Over the past few years Sony has been promoting a certain design philosophy with many of their first party titles. “Play, Create and Share” was popularised in LittleBigPlanet and was subsequently used in several other of Sony’s brands. Modnation Racers launched in 2010 with lots of hype around the game, but the title was shunned for usability issues as menus were hard to navigate and loading took up 90% of the user’s time.

Now, two years later SCE San Diego are given the opportunity to right their wrongdoings in the first iteration of Modnation Racers. With the Vita’s extensive range of inputs with several touchscreens, buttons and that massive 5-Inch OLED screen, they should be able to put out a high quality game that rectifies the issues of it’s predecessor… right?

First and foremost, Modnation Racers: Road Trip is a racing game, aping the beats of Mario Kart and in some cases surpassing it. You race, collect items to use against opponents and are able to boost if you drift. It all sounds incredibly similar and in reality it is very close to Mario Kart; however, there is one major difference.

Modnation Racers’ appeal is not just with arcade style Kart racing; it’s also with the player’s ability to create their own unique characters, tracks and karts. This offers something that many other racing games (Including Mario Kart 7) do very minimally, and luckily Modnation Racers is there to fill the massive customisable track-shaped hole in my heart. Using the tools to make custom tracks is very easy and you’re able to use the front and back touchscreens of the Vita to shape the track to your bidding. I tried making a simple track myself and got lost for what seemed hours making an incredibly complex track that I could upload and share with everyone playing the game. 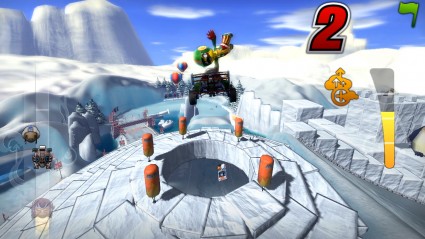 This jump is snow joke!

Mod-tastic
Uploading your tracks are pretty easy, and you’re also able to explore other players’ creations relatively simply through SEN. You’re able to search through and download other player-created tracks and filter through the highest-rated tracks with ease. This also applies to the Character Creator, which has some very interesting player creations on them such as Mario, and my personal favourite Megaman. The spectrum of character creations are very high, and even a brief look at other player’s creations really exemplifies the wide range of options available to you as you work through the game’s career mode.

You race through a variety of tracks in the Career mode and they’re all solid tracks with quite a few secrets and shortcuts; however, I found that some tracks were very jump-heavy. I felt that they were just there for the hell of it and not really doing anything for the track as a whole, acting as a needless obstacle that was simply put there to make a track longer.

In addition to winning the race itself there is also an optional range of “Race Objectives” that give you points, but it’s not made clear at all in the game what those objectives are. As such, when the icon pops up mid-race with “Mid Race Objective: Do X 3 times!” it’s only established when you actually complete an objective once, which is an utterly bizarre design decision.

Other than those little niggles in the race objectives and track obstacles the game plays as a simple racer nicely, and the only thing really holding back this game is the terrible framerate at which the Vita runs the game. At times it’s nigh impossible to actually see what’s going on because the game is rendering frames incredibly slowly. Even when there is not much going on in the race, the framerate still struggles to keep up with the game’s speed. When directly comparing the performance of Modnation Racers: Road trip to Mario Kart 7’s framerate and smoothness, you can easily see that Mario Kart 7 remains the top dog in terms of performance. 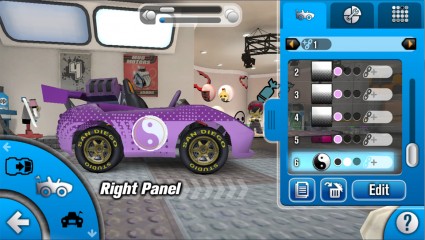 Highway to Hell
Modnation Racers: Road Trip is an average-looking title. While other games in the Vita’s launch lineup such as Uncharted: Golden Abyss boast an incredible level of graphical fidelity, Modnation Racers unfortunately suffers from a lot of graphical issues such as the stuttering I mentioned before, horrible aliasing all over textures and a terrible draw distance during races. For example, at one point in time I was drifting across a track and was seeing features on the road pop up in front of me as I was driving. It’s little things like this which mar the presentation quality of Modnation Racers: Road Trip.

In addition to the poor draw distance and textures, the menus in the game are noticeably low-res and look pixelated on the Vita’s 5 inch OLED. There’s no reason why this should be happening in a launch title, as other games such as Blazblue Continuum Shift: Extend have incredibly high-res menus and look crisp. Modnation Racers: Road Trip looks like a pixellated mess onscreen while navigating through menus. In addition to this are some usability issues with the Vita’s touchscreen, which does not seem to register my touches properly and I had to press the keys several times in order for them to work.

On the road again
Something that’s not a cross against this game’s name is its sound design. Racing, the roar of the engine and the background music all make for a light-hearted atmosphere that doesn’t take itself too seriously and fits nicely into the game’s world and atmosphere.

Overall this is what I feel to be one of the game’s strong-points, and it fits incredibly well into the world that SE San Diego has crafted; even though the entire game could be built around whatever zany creations the players have created, which in itself is a triumph. 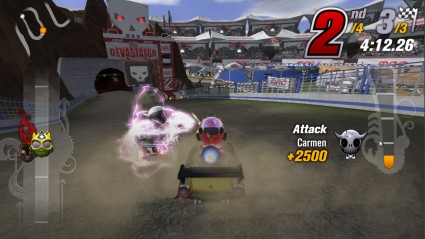 Runnin’ on empty
Probably the most disappointing thing about Modnation Racers: Road Trip is the lack of online multiplayer. You can’t race against other opponents around the world, and the only thing you can do in terms of racing with other people is using the Vita’s Ad-Hoc mode. The game’s primary function is racing; how could you even remotely oversee that people might want to play against other people online?

It’s not acceptable when other games of the same genre are doing this on the same platform at launch, like Wipeout for example. This boggles the mind further when you consider that you’d want to show off your awesome creations to other people online. It simply does not make sense and is unacceptable considering the Vita’s sheer power.

Bat outta Hell
Modnation Racers: Road Trip has a lot of potential buried deep beneath serious technical problems. The design of the game in terms of creation is fantastic, and there is a lot of room for creativity in the game which I commend. The actual kart racing is solid too, but is hampered by deep flaws in the game’s optimisation on the Vita itself.

In aspect, a lack of online multiplayer is also incredibly disappointing and I believe that this is not the strongest Vita launch title at all. I’d say that if you’re looking for a racing game to buy day one on the PS Vita, don’t get Modnation Racers: Road Trip. Its original concept is incredible, but is hampered by a host of technical issues.