The 3DS has now been on the retail market since early 2011, with an ever growing library of games to be played on after it’s laughably feeble launch. Receiving mixed reviews and a state of fear over how using 3D could damage youngsters’ eyes, the 3DS has since become a marginal success in a decreasing portable games system market.

The slow-burning success of the Nintendo 3DS could be attributed to the influx of exclusive first party titles that came shortly after the ‘launch window’: a phrase Nintendo coined in order to justify the lacklustre games that first appeared alongside their cobalt blue/black housing units. Anyone remember PilotWings 3D? We couldn’t forget it if we tried.

Now that four years have passed, the optimistic fandom of Nintendo’s buyer-base has seen a gravitation towards the previously shunned clam-shaped plastic from some of Nintendo’s older, hardcore gaming audience. At the same time, Nintendo were also ushering in a new wave of  younger casual players, once some more merchandise-friendly IP’s found their way onto the system (still no Minecraft though, which is the biggest shame).

Four years seems like such a long time in a console’s lifecycle that it might as well be having a mid-life crisis. With the New Nintendo 3DS, the Japanese console has already brought itself a new red sports car and some skydiving lessons as part of its last big hurrah before it can retire. I traded in my first-generation 3DS in order to pick up this new device along with Monster Hunter Ultimate 4 to see if Nintendo really have created a future legacy for its ageing system, or if the hardware is forced to spend the rest of its days in a nursing home that smells like wet wood shavings.

The first thing I noticed as I removed the hardware from its box was its sheer size in comparison to its older brother. The top screen is nearly twice as large as the first generation which is a great sight to behold. No longer do I have to sit on the train squinting at scrolling text. Instead, I can enjoy the same text at a much more comfortable distance – along with the rest of the train. I also noticed an improvement on performance on the system in comparison to my old 3DS. Moments where the framerate would jitter and the animations would muddy were less prevalent during long sessions, even with the larger screen to further highlight the visual blemishes that the console was capable of producing.

Unlike the New 3DS XL’s world-weary brother, the console lid now snaps into two positions as opposed to the predecessor’s standard position of ‘fully open’ or ‘fully closed’. It helps to increase comfort depending on the angle that someone might prefer to hold the console in relation to their face. The steeper locking angle makes it more comfortable to rest the console on the table as it’s played, for example.

It should be noted that the screen size and resolution are the same as the 3DS XL, so the same image quality can be expected on both systems. One feature that the New 3DS boasts however, is face tracking. Previously, the 3D capabilities could only be enjoyed at a fixed distance with no movement – a pain considering the 3DS also boasted gyroscopic motion control. The experience was similar to a behavioural therapy session in the universe of Clockwork Orange, to say the least. 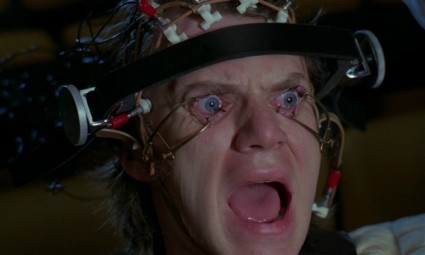 Now with face tracking, you are free to rock the device without the 3D effect being lost. Before, the choice was between either motion controls or increased visual depth. There’s nothing more jarring than the image splitting when in 3D mode, so this gives much more freedom to move the device around while still playable on a low 3D setting.

The 3D slider now clicks into place once it has been turned off. This means that if you prefer your Nintendo gaming experience in old-school 2D, you are in no danger of accidentally knocking the slider up. It also means that you can turn 3D down to its minimal setting without having to find that sweet-spot between being off and on. I found that turning the 3D down to its minimal setting was the optimal solution for me: I could still appreciate the 3D image, without the fear I may be permanently warping my vision over long sessions on MH4U. 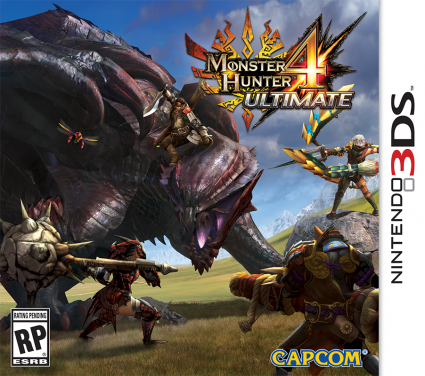 MH4U is one of the (currently few) games that takes advantage of the New 3DS features.

The volume slider now mirrors the 3D counterpart on the opposite side of the screen. Aesthetically, this makes a lot more sense than the previous designs and makes sure that it doesn’t interfere with hand-placement. This isn’t the only change that has been made to the layout of the buttons; the Start and Select buttons now sit underneath the face buttons, where the Power button used to be. The Start and Selectbuttons feel a lot more in-line with the rest in this new layout than they ever did at the bottom of the screen with the Home button. Previously they felt like they were just taking up unnecessary space which could have been used to make a larger touchscreen.

The one button placement that I have not agreed with is the Power button. Placed at the bottom-right edge of the handheld, it has made turning the system on and off more effort than it’s worth, necessitating the adoption of a raptor-like claw to apply pressure to the awkwardly-placed button.

One of the main selling points for the New 3DS is the built-in Circle Pad Pro. Once a peripheral that had to be brought separately in order to make your 3DS look like a malformed Sega GameGear, it now tucks away neatly just above the face buttons. It’s easy to think of it as the ‘style-pointer’ (or nipple mouse) on old laptop keyboards; it’s small but responds sensitively to the slightest movement. This is great for games such as Monster Hunter 4 Ultimate and Majora’s Mask 3D, which take full advantage over the camera control, but it isn’t a necessity to play these games with. Like the external peripheral itself, it’s a completely optional component to the 3DS gaming experience.

Interestingly, two new shoulder buttons have been added to the back of the device, sitting in-line with the standard L + R buttons. ZL + ZR respectively are simple enough to use and don’t require further reach to press but so far no 3DS games have come out that necessitate the use of four shoulder buttons (with the exception of Xenoblade Chronicles 3D). They offer the same inputs as the standard L + R for games that haven’t implemented this yet, but that gives off the sense that they will only be used for games exclusively designed for the New 3DS in mind.

This is my main concern with the New 3DS line up. Each of its toted features can be followed by ‘if you feel like it’ in the small print. Some of the features are a great upgrade from the original, but at what point will ‘New 3DS exclusive’ mean that loyal 3DS users will have to fork out an extra £150-170 to play any upcoming games they’ve had their eye on? The New 3DS rests somewhere on the spectrum between ‘shovelware peripheral’ and ‘next-gen console’. Of course, portable consoles are constantly in a state of perpetual upgrade in order to lure previous naysayers into the market, but there hasn’t been a redesign coming so close to a full-blown new console release since the Gameboy Advance SP. 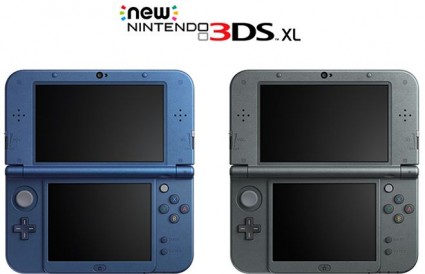 Is the New 3DS XL worth the money for an upgrade?

You have to admire the ambitiousness of Nintendo’s strategy: dividing the 3DS’s consumer base from young players (with the 2DS) and then pulling a bait-and-switch with a console that can provide players with a comfortable experience, solving all of the issues that were raised since the 3DS’s launch. The integration of Amiibo support also adds a level of cross compatibility with the Wii U that was sorely needed while feeding the inner-hoarder of the Nintendo fan base.

Amiibos fit perfectly into the portable gaming market but the current line-up of 3DS games that offers Amiibo support is sparse. So far, Super Smash Bro. 3DS has the most support (and thematic relevance) for the figurines, but the promise of first-party (and even third-party) supported titles might make the New 3DS a great investment for players looking for an excellent demonstration of cross-play features.

The New 3DS XL is an impressive addition to Nintendo’s growing collection of hardware options. The only issue is that the hardware is only as good as the software inside it, and until a slew of games are released that can take advantage of the system’s new features, dust may gather. If however, you are looking for an appropriate upgrade – or just simply want to take a belated leap onto the 3DS bandwagon – then you have worse options available to you.

The New range of 3DS consoles come in two models: the XL (reviewed and tested) and the standard (which measures just slightly larger than the original). Both offer the same features, but one is much larger (your guess which one that might be) and is priced accordingly. If you are stuck for choice, then the XLwould be my choice. The size of the XL might make a few people blush, but the larger screen really does speak for itself.

This is the best 3DS experience you can currently get. If you’ve yet to try the slew of games currently available then there isn’t a better time to start. If you already own a 3DS, however, you should find yourself quite happy until a range of New 3DS exclusives come along.