Few developers have truly bottled the arcade, pick-up-and-play feel of Epic’s Unreal Tournament since its initial 1999 debut. Many have tried, even Epic attempted to recapture past glory, but most have fallen shy of the mark.

Enter Alientrap Software. Back in 2002, they formed a low-key independent studio and started work on little-known title, NEXUiZ. Over the years, the game has been tweaked, adjusted and balanced from devoted fan feedback, and an overwhelming desire for perfection.

Now in 2012, NEXUiZ has become part of Microsoft’s House Party Promotion, remastered and rebooted for a current generation, but is age-old gameplay still relevant for a current-day demographic?

Either Shakespeare would be proud or mortified by Alientrap’s efforts, as they’ve seemingly managed to create the super-cyborg version of Montague and Capulet. Kavurssar and Forsellian have been at war for centuries., their wars renowned on the battlefield by all who bear witness to them. However, when the world around them starts to suffer, the effects of an out of control blood feud beginning to take their toll, both factions come together to form a truce. Well, they call it a truce; it’s actually more of a written contract to continue their war within a slightly more confined space.

In place of this war, a tournament known as NEXUiZ is held and broadcast all around the galaxy, which pits Kavurssar and Forsellian forces against one another in Team Deathmatch and Capture the Flag combat scenarios. It’s war, but on a slightly more diplomatic, scale. 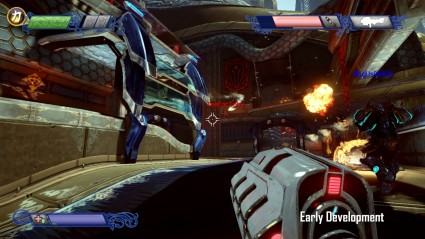 Dynamic mutation
The Unreal Tournament comparison is entirely fair. NEXUiZ feels very fast-paced and action-packed, allowing you to pick-up fragments of armour as you run around the map, along with little health boosts. However, this is much more akin to Epic’s original Tournament, as opposed to the more sluggish Unreal Tournament 3 offering from a few years back. There’s a lot of entertaining, fluid gameplay to be found here, and years worth of balancing and tweaking to make sure it’s of a high standard when it comes to online play.

That said, it would be wrong of me to completely pass NEXUiZ over as an Unreal Tournament clone. The game introduces an addition to the gameplay known as Dynamic Mutators. These are small, collectible power ups which alter the rules of the game for a set period of time. An example of this is the Pinata Mutator; a player loses their inventory when they run over it, enabling another player to run over the same collectible and collect all the previously dropped inventory items. Another type of mutator stops the clock, pausing the game for a short period.

Players also earn points in the game that can later be spent in a Mutator store. The points, known as Pips, also give an added bonus to the chances of a Dynamic Mutator appearing or not.

NEXUiZ comes bundled with nine maps, each with their own set storylines that sync in with the game’s lore. The maps are split into different types, some set up for Team Deathmatch, others for Capture the Flag. These are the only two modes available in the game, and there are no unlockables for further maps or add-ons here. Furthermore, the game doesn’t have a campaign or career mode. It’s all about the online play and bot training. There isn’t even a split-screen option. 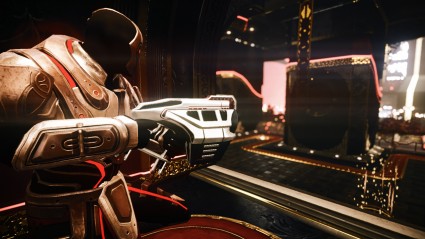 At last we shall have our revenge...

Frankly, this is a massive gamble for an arcade only title. When you consider NEXUiZ is attempting to breach a hotly contested genre that has already been massively tapped by enormous, world-renowned games, you could argue there is a degree of arrogance from THQ and Alientrap that NEXUiZ will even sustain itself past launch week.

This isn’t a slight on the gameplay, which is a lot of fun, but without a community and people playing the game, there’s no purpose to NEXUiZ. For a game that has been out in the wild since 2005, matched with THQ’s experience with the genre, I would have hoped they’d have recognised this as a problem before shipping the game for worldwide launch. Alas…

Your statistics aren’t tracked in Bot Training or Private Matches. The only way to measure up against the rest of the world is to go in hot with online matches, where your K/D Spread is measured, as well as matches won/lost, amongst other things.

On the plus side, the online is very fluid, and works well when you do actually find a game. Naturally, I had the copy in advance of it going on public release, so it’s difficult to assess how the servers will hold up on launch. However, from my brief time with the game, NEXUiZ seems very well prepared for whatever level of traffic it receives. 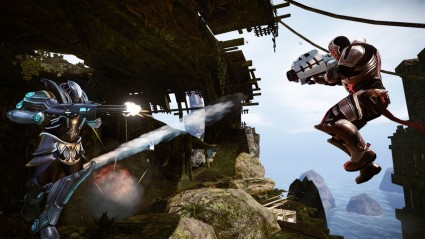 Cry me a river
NEXUiZ runs on Cry Engine 3, better known as the engine which empowers Crysis 2. As such, this is a very slick, elegant looking title, that boasts high production values. If nothing else, NEZUiZ will raise the bar for digital titles in the years to come, and further solidify the fact that the online realm is as good a place to pick up high quality, large-budget releases as anywhere else.

High-octane
With fast-paced gameplay, comes a pulse-pounding, sonic-speed soundtrack. Again, benefiting from a high-end engine, the game is fully tailored for High Definition. With an announcer presenting the action to a galaxy-wide audience, and bullets soaring through the skies at the speed of light, your ears will continuously struggle to keep up with the adrenaline-fuelled action happening moment-to-moment. 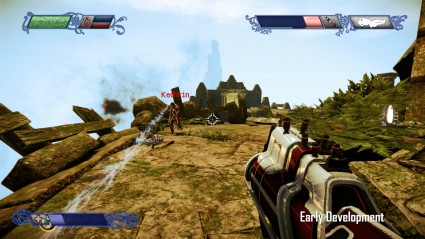 NEXUAiNT?
The bottom line is that NEXUiZ on XBLA will be defined by its community. If there’s a high adoption rate, and there’s still life in this game three to six months down the line, then this is absolutely worth a purchase. However, the unfortunate situation with NEXUiS is that the game could be dead within a month.

While it’s much more akin to Unreal Tournament and old-school FPS play, NEXUiS is trying to cater to audiences that are already fixated on a set batch of games. Sure, it’s launching at the bargain price of 800 points, but with a limited assortment of options and an online-only focused experience, this one, unfortunately, has to be recommended as a try before you buy.