Since Bejeweled revolutionised the way we puzzle on-the-go, many other games have tried to capitalise on its success with varying results. Layer 8 Software are one of the latest devs to weigh in with their Tetris-like puzzler, One Eyed Monsters.

Is it a worthy challenger to the Bejeweled crown, or just another failed attempt at toppling the king?

One-track story
Erm, bit pointless this one. I vaguely remember a badly-animated cut-scene of some kind when I first booted the game, but not much of the actual plot remains in my memory. Something to do with alien invasion. It’s not the focus of the game, obviously, and understanding it won’t improve your experience much.

Butter-fingered bombers
One Eyed Monsters (OEM) takes a simple but interesting approach to gameplay that starts off easy and quickly becomes frustrating.

The basic premise is this. The screen fills up vertically with different coloured alien monsters. Different configurations of coloured bombs fall from the sky, a-la-Tetris. Land a bomb next to an alien of the same colour and they both explode. The bombs can destroy aliens that are below them or to either side, and part of the technique is using stacks to cascade a line of destruction. If the screen of bombs and aliens gets too high, it’s game over. 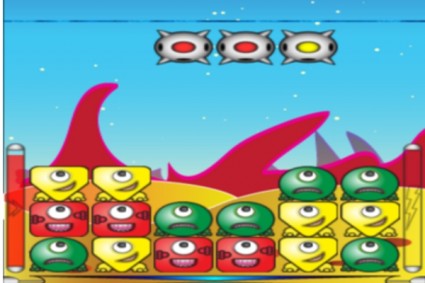 There are a few neat gameplay changes to help you out too. Play well and you build up some sort of bar, which when filled allows you to tap and hold to blow up any bomb on the screen, also detonating the 8 bombs or aliens in its immediate vicinity. As you play the game another bar slowly drains; when it empties the game goes nuts, throwing bombs at you doubly fast and filling in aliens quicker, making things tricky for a short time. Okay, so the second one doesn’t really help, but it does shake things up a bit.

In fact, shaking up is certainly what this monotonous game needs. After the initially relaxing nature of the game fades away you start to wonder why you’re bothering. Make a few mistakes and the bottom 8 rows of aliens become untouchable as unexploded bombs stack up on top, making success impossible. This happened so often I began to get suspicious. It was as if the game was cheating me, making me lose because there was nothing past the point I was at.

The controls help little. They’re simple, sure, but responsive isn’t a word I’d use to describe them. Swiping to shift the falling bombs about works fine, but unless you’re holding your iPhone with two hands and have a very accurate swipe it can all too often read a sideways swish as a downward one, sending the bombs rocketing down where you don’t want them. Tapping to rotate the configurations is fine, but even the slightest sideways movement reads as a swipe; you have to be bang-on straight-down to avoid unwanted movement.

Another side-note that will likely only affect a very small percentage of players (but is worth mentioning), is the severe lack of consideration for the colour-blind. No, that doesn’t mean we see everything in black and white, just that we have trouble defining certain colours. Red and green, green and brown, green and yellow, blue and purple, and so on. When these colours are placed adjacent it can be impossible to be sure which is which.

OEM obviously doesn’t care as its green and yellow look identical. They also look like completely different shades in the ‘Coming Up Next’ window, so working out a strategy is next to impossible. Bafflingly, though, the aliens are very defined shades and I had no trouble seeing them! I will freely admit that much of my failure was down to dropping green bombs onto yellow aliens and vise-versa, but the point still stands that the game gives you very little room for error. 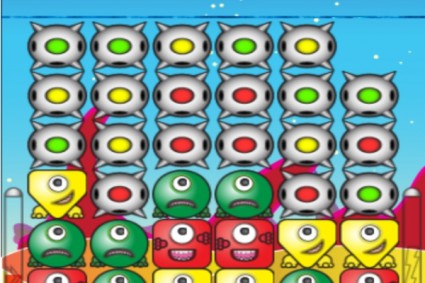 …and how it ALWAYS ends.

Red, green, yellow… and red?
To call the graphics ‘poor’ would likely be doing the game a favour. Everything about it looks cheap and tacky. From the flat menu screen to the plain backdrops and grainy textures of the game screen, it seems the graphics department of Layer 8 consisted of one over-confident web comic artist.

There is a school of thought that states that graphics in puzzle games are of no consequence, usually pushing Tetris as a proven example. These days I think we can say that’s bollocks. Bejeweled is so attractive and playable partly because of it’s shiny, shiny gems and the lovely little fireworks they make when you pop them. Everything in that game is designed to be pleasing to the eye and I can happily sit for hours matching those gems. OEM has none of this visual attraction and it suffers for it.

Silent bomber
Other than a garish, looping soundtrack that never changes, there’s not much sound to speak of in OEM. The bombs make stock explosion noises when they detonate and generally all the SFX seem to be gleaned from one of those old ‘Movie SFX 18!’ CDs that they used to use for radio jingles. Getting very little audio feedback seems trivial, but try playing Mass Effect 3 with no music and you’ll feel the difference. Mute it altogether and you won’t enjoy it as much. Trust me on this.

A monster of a game
It’s baffling that they’re charging money for this. It’s the sort of thing you expect to find on Newgrounds as a ‘My First Puzzle Game!’ submission from a fledgling programmer. If it was free I could maybe let it slide as a tester game or first go, but even the 69p price tag is too much for the amount of quality game you get.

Everything about OEM screams ‘school project’ so loud you have to reach for the earplugs. Not only does it give Bejeweled nothing to worry about, it also fails to be a compelling puzzler in its own right. Next…

If for some reason you still want to play the game after reading that, it’s available exclusively on iPhone and iPod Touch for 69p off the App Store.