The definition of a 21st Century argument is, unfortunately, regularly defined by swearing and/or derogatory racial/sexual slurs. Sure, the focus starts out with differences in opinion, but as tempers flare, tongues loosen.

How much different would life be if the definition of an argument boiled down to who can make the best anagram out of a series of jumbled letters? What if ‘Bums’ wasn’t the last word used to end an argument, but ‘subsect’ was?

Now that Quarrel has come to Xbox Live, the term ‘fighting words’ has taken on a whole other meaning.

Opening gambit
Quarrel has the sole intention of making word games fun, and it does this by managing to incorporate Scrabble into Risk. The game starts with a multi-coloured map divided between players (up to 4 can play at one time) with each player represented by one colour. It is your objective to paint the map with your own colour, and to do this, you have to command a small tribe of quirky characters to ‘quarrel’ with opposing armies.

You start out small, and so your tribe is usually made of up to five people. However, as you claim more territories, so you gain more support, whether you capture enemy prisoners or summon backup to bolster your ranks. 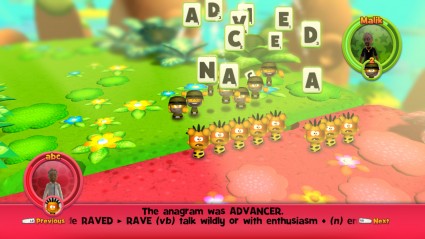 Anagram is an anagram of anagram.

It’s only words…
The aim of the game is to create the highest scoring word in the fastest possible time by unscrambling a string of letters. However, the key thing to remember is that while the string of letters may seem random, every single combination makes up an 8 letter anagram.

Each letter has a score, and if it is used correctly within a word, that score is added to your word’s overall total. For example, a letter that works in various combinations like A isn’t worth very much; whereas an obscure letter like Q or X will really boost your score.

I know what you’re thinking, if you guess the anagram, you insta-win, right? Wrong.

If you’re entering battle with only four men, then you will only be able to ‘attack’ the opposition with a four letter word. This makes things equally interesting as; hypothetically, you could find yourself at a disadvantage as much as an advantage. Coming into battle, if you have four troops (four letters), you may find yourself up against an opponent with eight troops (enabling them to attack you with an eight letter word) therefore increasing the likelihood they can beat you. This works both ways, however, so you could very well find yourself fighting a 2 man tag-team with your 8 strong army.

Control-wise, it’s pretty easy to cycle through the letters in Quarrel and make a word, but for added convenience, the game is one of the few to support the official Chatpad. This makes life a lot easier, especially when you’re in a ‘fastest finger first’ situation against a real opponent.

Quarrel has a variety of modes for you to check out, with a variety of differing skills levels to accommodate the quick-witted or slow-starters. All are slightly different, but each offering a nice spin on the initial word vs word template set out in the game.

Your beauty can hardly be expressed in words
Quarrel is drawn in a very cartoony style and is a far cry from the iOS version that was released years back. While the focus is clearly on the words, the development team have made every effort to ensure Quarrel is a real visual splendour.

The happy, go-lucky faces of your tribe will instantly endear them to you, their gooey, dough-ball shaped eyes gazing at you so dependently as you contemplate those attacking words, their lives completely in your hands.

Quarrel is a truly rich, colourful game that encompasses a variety of landscapes, all of which will instantly appeal to the naked eye. For a simple word game, Quarrel is shamelessly elegant. 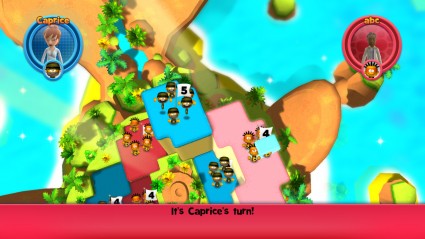 Mark your territory with words. Not piss.

Sounds like…
Befitting of the comic-book style of the game, Quarrel’s sound-effects are equally flamboyant. The sharp squeals and squeaks of your tribe as they prepare their formations, the Biff, Pow and Thwacks as they enter a war of words, and the wide-ranging music, from a harmonious lull to an up-beat, full throttle tempo really bring character and poise to the game.

One master wordsmith to rule them all
Quarrel also features a fully fledged online mode which, unlike other Arcade Games, may actually stand the test of time. It’s created a nice little niche for itself in the online avenue considering there is little else out there quite like it. What’s more, it’s going to be tough for competitors to top because it’s very well-balanced and paced.

Up to four players can go head to head, with fastest finger first being the preferred mode of contention. Players still aim to colour the map in their respective colour, but the game grades you at the end, giving you an overall Word I.Q. This is judged by the words you’ve used and the score you’ve accumulated, as well as your tactical position on the grid.

The last word
Quarrel is one of the most refreshing and entertaining releases to come on Xbox Live Arcade in a long time. Perhaps destined to be buried underneath uncreative mish-mashes and ill-desirable ports, Quarrel truly stands shoulder-to-shoulder with the greats, coming in at a ridiculously under-priced 400 points.

With a fully featured multiplayer mode, a slew of achievements, tons of replayability and fun for family and friends, I really can’t recommend this enough. An absolute treat to play, Quarrel offers more value for money than perhaps any other Arcade game we’ve ever seen.