The Amiga defined a generation, bringing with it some classic titles that are still as beloved today as they were back then. Alien Breed, created by Team 17, is a reimaging of one such classic Amiga title and has been released in episodic instalments via digital download mediums across multiple formats throughout the year. Descent is the third and final instalment in this new Alien Breed series and follows the continuing story of Theodore J Conrad, an engineer aboard the spaceship Leopold as he struggles against a wave of unrelenting aliens.

Does Conrad and Alien Breed go out with a bang or will this last episode redefine the series for the worst?

Aliens in your closet?

If for some reason you’re playing this game having not played Evolution or Assault, firstly, why not? Secondly, here’s our reviews of the first two instalments here and here to give you some perspective and thirdly, well, you really shouldn’t be.

However, if you are playing this without any prior knowledge of the series, then by starting up the Single Player campaign, you’ll be treated (or condemned) to a comic book adaptation of everything that has happened in the story up to this point. Aside from the rather atrocious, over-dramatised voice acting and the pretty unclear comic book visuals, you’ll hopefully get some perspective that Conrad’s ship has been overrun by a ship of a larger size and you’re going to be in the fight of your life against swarms of aliens. Conrad’s emotions have also been toyed with in this instalment as a member of his crew, Mia, has been horrifically mutilated and he is forced to face down her newly morphed, malicious form. Against his will or not, Conrad is on a mission of survival and it’s up to you to ensure that he does just that by getting off the Leopold before it crashes and leaves your bodily parts floating forever in space, so there’s some incentive to prevail.

Take this you piranha faced freak!
The game takes place from a top down view and sees you running through the corridors of the Leopold, firing guns and activating terminals. There’s a range of weapons to choose from including an Assault Rifle, a Flamethrower, even an Electro-charged gun, and you’ll need to use each of them in order to survive. The game also enables you to upgrade these weapons, increasing the clip capacity, the damage output and more. This is done through the means of Index Terminals that are scattered throughout the ship which also enable you to save your game at anytime, refresh your ammo and health supplies and even sell items you may not want.

Naturally, it’s advised you save as often as you can as the game can certainly get quite challenging and it doesn’t have much compassion for the gung-ho and unwise. It does have auto-save points at certain points of the level, so there are chances for redemption if you forget or you just ‘don’t wanna’, but you will need all the help you can get and the Index Terminals are really good in getting you out of a tight spot!

Although, while the difficulty factor is ramped up, actually reaching your objectives has been made as simplistic as possible. A location way-point indicator on your hub shows you the direction you need to be heading in at all times, which certainly makes life a lot easier when strolling through the same-faced corridors you’ll become accustomed to. Your mission will require you to perform all different manner of tasks, such as flipping switches, activating terminals, even facing down bosses at the closing moments of each act. It’s quite interactive and not entirely mindless shooting around every corner.

This game can be really tough, especially on the hardest difficulty sets. You’ll quickly learn the importance of conserving ammo and being tactical in your attacking and defending. One false move and you’ll end up like the skeleton you looted that last clip from. 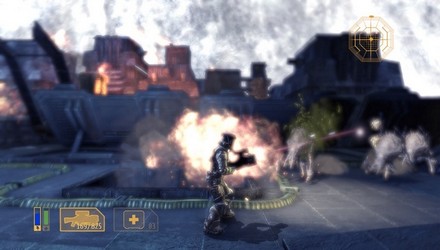 You’re an ugly son of a bitch!
Descent is dark. You’re in an environment where villany is king, the Leopold is on the verge of destruction, explosions are rife, creepiness is in abundance, there are broken panels, loose wires, dead bodies and Alien nests. Your crew has been wiped out and you’re alone. The creatures you’ll be facing will range from the smallest critters to the largest most vile wretched abominations unknown to humankind and all that stands between you and them is the gun in your hands. Team 17 have really managed to create a gritty, tense atmosphere in the game that is very reminiscent of the films these games were inspired by in the first place (Hint: Aliens).

The game uses the rather remarkable Unreal Engine 3.0 to make all this happen and, even though it’s mostly based from a top down view, is a really good-looking game. Well, good-looking in the way that green blood and claws and blood spattered and smeared all over the Leopold walls is a good image. The graphics are really good quality and sum up that Descent is the darkest instalment of this series to date, both in terms of story and in depiction.

Scream for me!
The shrill cries of aliens as you pump them full of lead carry the game, allow with the grunts and moans as your skin is slashed up with razor-like claws, the hard-hitting adrenaline-pumping rock music when you’re in a tight spot and fighting for your life to survive, running down to your last bullet and having to swat face-huggers away with your forearm. While the voice acting of the characters, particularly in the comic book cut scenes, is quite awful, the rest of the sounds of the game are bang on target and keep the tension rolling all throughout Descent.

Although, hearing ‘Conrad’ whispered at me every three seconds during levels became more than a bit much to bear. I get what Team 17 were going for here, but instead of sticking an audio file on loop, they could have built the tension more by just using these whispers at appropriate points in the level. One thing is for sure, unlike most action run and gun romps, at least I’ll never forget the name of Descent’s protagonist. Jeez… 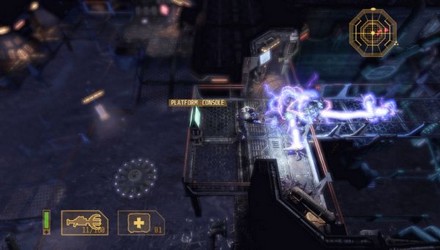 ...and lots of electricity!

I got your back!
The game isn’t just a single player experience though. You’re able to play the whole campaign through cooperatively with a buddy, locally and over Live. Although strangely, you can’t change difficulties in co-op. What’s more, you can’t start the game flat-footed, you’ll need to be ready and dive right into the thick of it, otherwise you’ll both be overrun really quickly.

What’s also great is that there is a ‘Survivor’ mode in the game, which will remind you of ‘Horde’ mode in Gears of War. Waves of Aliens, a bunch of players, ammo, armour and health scattered around and the will to survive. There are leaderboards for this mode which will allow you to compare your scores with the rest of the Descent-playing populace. Again, this is available locally or over the net.

These can add some further longevity to a game many might write off as a ‘good for five minutes’ experience and do make the game seem a much more viable package overall considering its price point.

Bloody good time?
It is fun. There’s no denying that. It’s not a terrible game by any means and it will certainly sustain your interest for at least several hours, however, that may be about all it will entertain you for. Even at this cheap, bargain price, it’s difficult for me to recommend this as an essential purchase when there is such a large catalogue of quality games out there on the market that are more deserving of your money right now.

In conclusion, if you’re looking for a nice retro fix of how gaming used to be, if you like challenging, intense action games, this is definitely worth trying and is one of the better games in this genre for quite some time. Descent is a fitting climax to a good series but is unlikely to leave any lasting impressions on you days and weeks after you’re finished playing it.