Review: Back to the Future: The Game

Marty McFly is best remembered for two things. Rocking out to “Go, Johnny, Go” and Hoverboards. It was a role that idolised Michael J Fox back in the 80’s and made him a household name overnight. The Back to the Future films are legendary and many critics claim you need to see them before you die (which I would strongly advise you do, by the way). Even twenty years after the original was released, the film still holds up incredibly well with today’s standards and remains one of my all time favourites. Yet, despite the brilliance of the trilogy, it strikes me as odd why the series never received an equally quality computer game?

Well, times may be about to change. To celebrate its 20th anniversary, not only was the original movie re-released in cinemas with extra polish and a blu-ray version was released, Universal Pictures signed an exclusive deal with Telltale Games to produce an episodic gaming series based on the franchise with all-new stories. As exciting as it was unexpected, this five-part series has Christopher Lloyd reprising his role as ‘Doc’ Emmett Brown with Bob Gale (one of the original writers) serving as a consultant for the games script. To make things even more exciting, Bob Gale himself has stated, unlike the previous animated spin-off and comics, he considers these five games to be a part of the Back to the Future series and counts them as part of the main trilogy, thus proving that this is more than just a simple cash-in attempt. The first episode takes place six months after the events of Back to the Future Part III and sets the tone for the following four episodes. To date, the series has been released on PC and MAC with a PS3 and iPad version due in 2011.

Has it been worth the long wait? Does it hold up to the legacy of the series? This Is My Joystick is here to answer all your questions.

Please note: Episodic games tend to follow a different review structure to our normal reviews, as such, this is an ongoing review. Keep checking back here for our thoughts on all the other episodes in this series as they’re released.

Episode One: It’s About Time 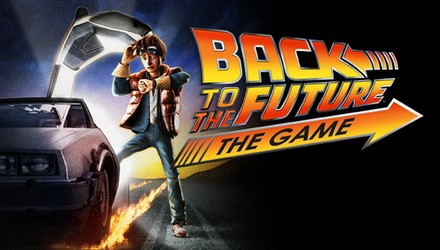 As I previously alluded, this first episode takes place a full six months following the events of Back to the Future III. Events have transpired in between the timeframe of the final film and this opening episode and Doc Emmett Brown has been missing for quite some time. As such, Doc’s stuff is being auctioned off by the bank and his property, which has become long-term vacant, will be repossessed. While everyone around him is convinced Doc is dead, Marty is determined that Doc is still alive and tries to convince his father, George McFly, who is helping catalogue Doc’s stuff for the bank and Biff, who is trying to buy it all, that this is the case. Just when all hope seems lost for Marty, a duplicate of the DeLorean races through time and lands outside Doc’s house. As he inspects the time travelling machine, not only does Marty find Einstein, Doc’s trusty canine but he also finds clues have been left inside. Emmett is once again lost in time and he needs Marty to come and rescue him from another sticky situation. Thus Marty’s adventures through time begin all over again!

I would say the writers have done an amicable job tying up the first episode of this new series with the film and have managed to stay faithful to the original source material, whilst doing new and exciting things with it. You get to see what’s been happening in the present time line of BTTF with Marty’s family life and with Doc, but also have new stories intersecting with that which make sense and have an authentic feel. Although, Jennifer is conspicuous by her absence, even though she’s mentioned. Wonder if they have plans for her? I won’t say anymore about the plot but suffice it to say, this does an excellent job of staying true to the theme of the movies. 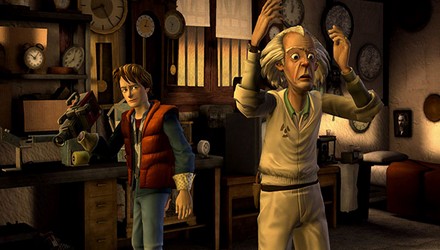 The game’s graphical style, while it may baffle you at first, also captures the essence of the series. Everyone looks as they did in the films, only in animated form with Doc being the best visual recreation. There’s also the same diversity in terrain and backdrop as one would come to expect from the series, everywhere from Doc’s home to seedy soup kitchens. Don’t worry, the cut-scenes in the game keep everything in check and make for a very seamless experience, easily immersing you into the story.

The game is controlled via pointing and clicking as you’ll come to expect from previous Telltale Games. You can also control Marty using the W,A,S,D key combination and hold down the shift key or right mouse button to make Marty run. Marty will collect some items as he goes through his journey and occasionally will need to use these items to interact with locations or people in the BTTF World.

However, the game has been designed with all types in mind and has an inbuilt hint system that works in stages. If you’ve ever seen the UHS hint system online, you’ll have some idea how this works. The first hint usually describes the exact problem that the player is faced with, the second hint will then offer a slight clue to point you in the right direction. If you still need more help, you can then have the game tell you exactly what you need to do. This makes sure that everyone can see the episode through from beginning to end. This is somewhat of a first for Telltale, while they’ve always offered hints in their games, they’ve never actually told you the full solution to a problem. Of course, this is entirely optional and you can play the entire game through without help from anyone. 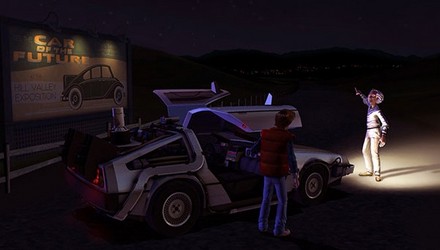 I know there was some initial disappointment that Michael J Fox wasn’t able to fulfil his duties as Marty McFly again, however I’m here to tell you that AJ LoCascio does an absolutely fantastic job. So good, in fact, that you’ll soon forget it’s not MJF. Remember when Peter Sellis couldn’t reprise his role as Wallace and they got a voice actor in to replace him for the games? Remember how good he was and how closely he captured the voice? Well, AJ is better! It’s not Michael J Fox but it might just as well be. Absolutely amazing performance.

Plus, it is so good to hear Christopher Lloyd’s voice in a game again. Just hearing him talk brought back to the fondest memories of both the movies and Virgin classic Toonstruck from the early nineties. I haven’t had chills and smiles like this in a long time and it feels good. Lloyd has still got it and will still manage to melt your mind with his rapid, scientific musings and detailed soliloquies. Lloyd is ace in this first episode, it’s as if he played the ‘Doc’ character yesterday and he hasn’t lost a step from twenty years ago. He’s still the same wacky, zany professor we all love and remember.

As with all Telltale Games, the episode is quite short and will last you a few hours at maximum. Also, I got the feeling that towards the second half of the episode, Telltale did use some of their previous games as a template a bit too obviously. to  In fact, if any of you played Fright of the Bumblebees, you’ll find more than several passing similarities to the conclusion of ‘Its About Time’.  Also, for the first time, the game needed me to be connected to the internet to even play. Normally this wouldn’t have affected me but because I was in a hotel over New Years that didn’t have a Wi-Fi connection, I struggled to even load the game at times. Obviously you’ll need to download the game and therefore need an internet connection in the first place, but I found this to be a bit of annoyance that I couldn’t just load the game at any time.

However, when all is said and done, this is the most faithful, entertaining and exciting Back to the Future game that has ever been released. Gone are the awful memories of the train level in the BTTF 3 game on Amiga and the irritating hoverboard levels from BTTF 2, Telltale have recreated a fan favourite and done it right. Not only that, but they have achieved one of their finest hours in game design. So, to conclude, ‘All About Time’ has an exciting plot with a gripping conclusion, brilliant acting, solid gameplay mechanics and a soundtrack that will make you giddy with glee; I cannot stress enough that you need to play this game.

A Back to the Future game that rocks? Great Scott!