If you were to ask me what my favourite online shooter was on consoles, I would have to say Battlefield: Bad Company. Yup, I’d have to choose that over the likes of Halo and Call of Duty, and because of that there may be an element of surprise amongst our readership. It’s easy to see why; aside from the fact that these two franchises have been battling it out to be the most played online title on Xbox Live for these past three years, Halo 3 boasts an immaculate online set-up and COD has a brilliant levelling system aimed at keeping players interested.

However, as much fun as I’ve had over the years on these games, over the last year I found myself growing tired of playing nothing but Call of Duty three years running. When I wanted to play online and glanced at my collection, for a long time the first title I always opted for was Bad Company. In many ways it lacked the polish and robustness of COD and Halo, but it was almost like a young upstart against other shooters; loud and brash; there was just this overriding sense of fun and drama that came when playing the game. Last week EA and DICE released the online-only Battlefield 1943 via XBLA and PSN, is this 24 player shooter worth your dosh?

Another WW2 game?! Seriously?!
As you may have guessed from the title, DICE have taken Battlefield back to its World War 2 roots. Many may have grown tired of fighting the Axis forces on many fronts over the past few years, it has been a while since this particular franchise graced that era and people such as myself with a huge interest in WW2 won’t necessarily find that a massive deal. In many ways you could argue (with some accuracy) that this is less of a new title and more of an extremely watered-down remake.

You see, at release the game featured only three maps (Iwo Jima, Wake Island and Guadalcanal), all of which were featured in the first Battlefield outing (1942) on PC. A fourth dogfight-only map called ‘Coral Sea’ was unlocked on Xbox Live after all players had reached a collective milestone set by the developers in a community challenge, something I hope they do more of. That said, with such a paltry amount of maps on offer at the moment and only one game mode (conquest), the environments of BF 1943 can become repetitive pretty quickly in the face of excellent level design; especially with extended play sessions. Hopefully DICE will offer up further maps speedily over the coming months to keep people interested or I can see players swiftly moving on.

Diluted experience?
The general gameplay and shooting mechanic is classic Battlefield, however the number of included maps aren’t the only thing to be diluted from the game, and some of these omissions directly affect the gameplay experience when compared to previous versions. In fact ‘three’ very much seems to be the magic number as the class and weapon system has been condensed, stripped and amalgamated down into just three classes; Riflemen (with rifles and grenades), Infantrymen (SMG and bazooka) and a Scout (Sniper rifle and a Katana for melee attacks). Unfortunately that is as varied as it gets in terms of weaponry, as apart from the particular brand of guns differing depending on which side you land on, there is only one gun of its type for each class, and the same is also true of the vehicles on offer. What that does ensure though, is the game is extremely well balanced in all areas. 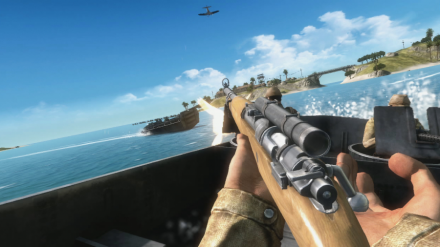 Talk about a moving target...

Also lost in the stripping-down is the need for medics. Gone are the health percentages and medi-packs dropped by a support class, replaced with the now more commonly found timed-replenishment. While I am a fan of this system in other games, when it’s missing from the Battlefield formula it removes the feeling of danger and nullifies a lot of the need for teamwork. Another element that surprised me greatly is the use of unlimited ammo; a poor shot in close combat can still put you under pressure and get you killed, however you never find yourself in a situation where being totally careless with ammo can leave you scrambling for someone else’s weapon pack. This is extremely beneficial to snipers who can remain unpunished for shoddy shooting for long periods of time.

Where the missing elements are notable and can detract from the tactical side of the game, they thankfully don’t affect the core excitement and drama of previous versions. Every battle feels organic and exciting. Every time you think you have the upper hand and then randomly an enemy tank rolls in the middle of fire-fight, it almost feels like an elaborately written single-player set-piece. It’s that unpredictability that helps fight any repetitiveness you might encounter because of other shortcomings.

Graphic violence
Whilst much of the environment is recast from Battlefield 1942, it is at least remade in DICE’s excellent Frostbite engine, allowing a decent amount of destruction to buildings and ground cover around the map. Looking at the textures and character models it is clear that being a downloadable title has meant compromise has had to be taken with the visuals; it’s not remotely as beautiful as Bad Company using the same game engine. Being a downloadable game you can forgive that, and the game packs in a lot of scenery in a relatively small package.

Kablooey!
The sound is easily the weakest part of Battlefield 1943. Gunshots lack audible punch, explosions sound surprisingly lacklustre and there are technical issues in abundance. Quite often all sound briefly dims to nothing before fading slightly back in. There are some nice touches, such as the forties style radio broadcast explaining who won the round post-game. Being an online only experience there’s not much room for a ‘proper’ soundtrack, but the score works well, if a little stereotypical of WW2 media. 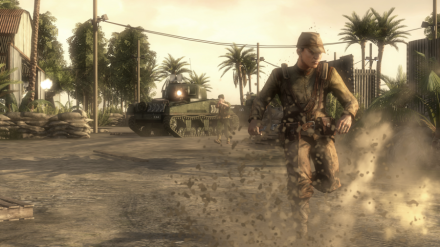 Bringing NOTHING to a tank fight!

Avoid it, try it or buy it?
For an arcade experience, Battlefield 1943 is a pretty well-rounded, fun and accomplished package, but for a price of around £10 for only three standard maps (and a tacked on ‘reward’ one) and a whole boatload of other concessions it becomes difficult to recommend it whole-heartedly. I can maybe understand the cost being slightly high, as with 24 players EA have had to provide a lot of servers to ensure smooth running, pinpointed by the launch day issues. I have enjoyed my time with it, and I’m sure I will continue to do so, but it becomes even harder to recommend it when you consider that for a little more money you could pick up Battlefield: Bad Company with a competent single player component, two online modes, far more classes, weapons and vehicles, eight maps and a lot more polish.

If you already own Bad Company I would advise you to stick with what you’ve got and wait for the sequel due early 2010. If you don’t have an online shooter in your collection, or haven’t sampled Battlefield before, then you could do far worse than to give this a go, but be aware you are missing out on half the experience in the process. Give the trial a go and decide from there whether it is worth the cash for you, but I must point out that you could play a similar game with more customisation, by the same developers for free on your PC as we speak.