These days we are overwhelmed with choice when it comes to first person shooters; Call of Duty, Battlefield, Left 4 Dead, Killzone and Halo series just to name a few. Why then would a small, comparatively low-budget first person shooter such as Breach deserve our attention, when there is so much more on offer of a higher calibre? One good reason may be that it’s available on the Xbox Live Arcade for just 1200 points, the same price as a map pack for a certain one of those such games…

Breach, developed by Atomic Games, promises different classes with unlockable weapons and gadgets, three maps (with a nighttime variation of one of them as a bonus), and destructible map elements. The downloadable title Battlefield 1943 released not too long ago at the same price point and was a run away success, so can Atomic Games replicate this achievement or will their efforts, all in all, be just another Breach in the wall?

Breach is an online multiplayer-only title, so those who prefer the company of AI should put their wallets away now. Matches basically portray the old cliché of counter-terrorists vs. terrorists, or in this case, Black Ops vs. OpFor (general term for Opposing Force). One of the first games to truly popularise this arrangement was probably Counter-Strike back in 1999, and in fact Breach feels strikingly familiar to this famous first person shooter.

There is no mode present involving planting or defusing bombs, but there are in fact five different modes to choose from, which provides a nice variety. Team Deathmatch mode features the tried-and-tested ‘get more kills than deaths’ gameplay which works as well as ever, and Sole Survivor is similar but has no respawns, just like Counter-Strike, and real-life for that matter. 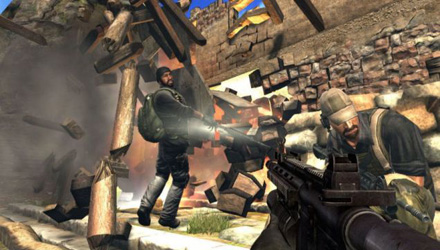 Don't stand too close, or you'll be twiddling your thumbs for the next five minutes.

The perhaps misleadingly named Infiltration involves several different capture points dotted around the map to secure, in the style of Battlefield, and is one of my favourites. Retrieval is the least popular mode for everyone by far in my experience, involving capturing and dropping off a canister; it’s enjoyable enough but maybe just not as interesting as the other modes. Where Breach really shines and shows some originality is the attack-and-defend mode called Convoy, where one team has to defend vehicles and clear obstacles in their path to reach a destination, whilst the other team tries their best to stop them. The vehicles are basically indestructible, allowing repairs an unlimited amount of times, but the true genius lies in the fact that they will not advance unless a player of that team is nearby.

All of the game types inspire some fast-paced action on the whole, albeit a little slower and more methodical than Call of Duty. The exception is Sole Survivor with Hardcore mode activated, providing a tactical and realistic experience that demands precaution, for those who wish to participate in authentic conflicts but are too fat and lazy to pass fitness tests, or have too much common sense to want to risk getting shot.

Five character classes are available that are typical of other shooters: Rifleman, Gunner, Support, Sniper and Recon, the latter of which is a hybrid of Rifleman and Sniper that needs to be unlocked. Within these classes are the usual mix of assault rifles, shotguns, sniper rifles and light machine guns to get your trigger-happy mitts on. Most of these need to be unlocked through gaining experience, just like every shooting game these days.

The guns may be standard fare but there are some unusual gadgets and perks to unlock and play with. For example, the Bionic Ear gadget lets you hear the footsteps of your enemies through walls, and the Sonic Imager actually lets you see them. Equipping The Brawler perk gives you double melee damage, and Vendetta places a handy tag on the last person who killed you, for you to find them and exact revenge. 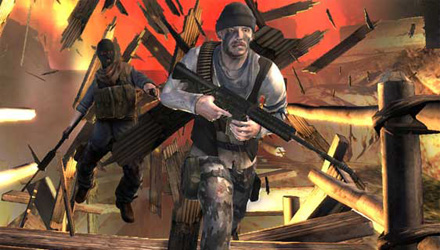 The Flying Perk is particularly awesome.

The main issue is that you need some real determination and patience to get hold of all of these fun toys. Breach involves as much grinding as an old school MMORPG; it takes an age to unlock the decent stuff. As a result, the gap is further widened in the advantage that older players have over new ones. This isn’t too much of a problem if Breach is a worthwhile commitment, however there are some definite snags.

This game feels like it’s around ten years older than it actually is. Controls and animation are clunky, with characters feeling like they’re either walking with a limp, or that they’re hobbling around whilst holding on desperately for the toilet. Clipping is rampant, with corpses in particular hilariously lodging themselves in walls, or their physics glitching and causing them to spasm all over the place.

Another aspect that will bring you back to the past with a thud is the awful network, that often makes it feel like you’re back on dial-up, whilst your filthy neighbour is leeching off your connection and downloading porn. When Breach lags, it lags. They also might as well have not bothered implementing host migration, as more often than not it just fails or crashes the game. Additionally, I don’t know whether it’s just me, but matchmaking just seems completely broken and fails to connect, meaning I always need to use the dire server browser that has no indication of connection quality.

Thankfully, even though Breach is completely technically unsound, there is potentially a lot of enjoyment to be had from the gameplay. It may be easy to discredit it at first after playing a comparatively well-polished game like Call of Duty, but some magic lies underneath its amateurish exterior. Maps are simple, harking back to the days of Counter-Strike when there were just a couple of chokepoints with teams spawning either side, but I have to say at times I prefer this structure. Sometimes the simplest method is the best method, and Breach really feels like a back-to-basics title, in a good way.

The only downside is that the middle third of the map is the only part that’s really used in several modes, and there’s a bit of an uneventful run/hobble up to actually get to the action. It removes the confusing elements of map spawn rotation that are prevalent in a lot of shooters nowadays however, where you randomly spawn all over the place; to get behind enemy lines in Breach you actually have to work at it and sneak through rather than hope the game just spawns you there. 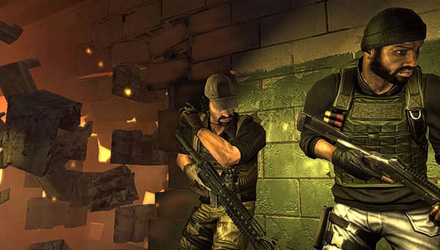 Combat is solid enough, albeit a little unpredictable. The hit detection varies from giving you homing bullets to apparently firing out harmless peas. Explosives are good fun, allowing you to blow up the bridge your enemy is on, punch a hole through the wall they’re hiding behind or leave a nice timed breach charge behind for your pursuer. The fairly well-made cover system lets you gain some protection Rainbow Six: Vegas style, although there’s always the risk of course that an RPG might turn it into rubble…

There’s definitely room for some tactical gameplay here if you were to use voice communication, although taking the role of lone wolf is thankfully still a viable strategy for misanthropic recluses like myself. All in all, Breach is a satisfying experience, and after a while it’s quite easy to forget you’re playing a budget title that costs just a quarter or less of its big-shot rivals.

Sex on the Breach?
The unfortunate lack of polish that can initially put you off is definitely apparent in Breach’s presentation. The graphics are not quite hideous, but they’re certainly blocky and basic with soupy textures, and could have impressed between five and ten years ago but look a little out of place now. Battlefield 1943 probably had the better idea in its cartoon style that can prevent a game from looking outdated; just take a look at World of Warcraft, which would be looking a lot uglier by now if it hadn’t adopted the same approach. 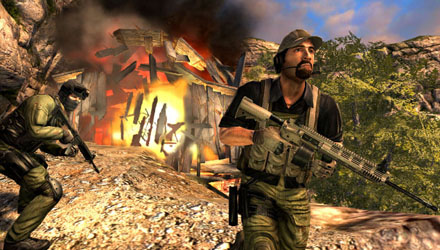 Now if I didn't know any better, looking at these promotional screenshots I'd have said that Atomic Games were trying to show off their destruction engine, or something...

Judging a book by its cover is something our mothers always told us not to do though, and it definitely applies with Breach. Not to mention, if the graphics were gorgeous then the download would inevitably take ages, and my poor old 20GB ‘Premium’ Xbox 360 would be struggling for hard drive space even more than it already is.

A Breach of the peace?
There’s not a lot to say about the audio of Breach; it’s just there. In general it can be quite lacklustre with some guns and explosions that sound weedy or artificial. There’s just not a lot to get the eardrums excited; it performs its basic function and absolutely nothing more.

I’ve Breached a decision
Breach is definitely a flawed gem. Its downsides are that it is pretty ugly, behaves clumsily and awkwardly, and has some of the most rubbish netcode I’ve seen considering that it’s an online-only title. Basically then, it’s like the uncool kid at school that’s actually quite awesome when you get to know them. Except for that last bit about the network, perhaps. 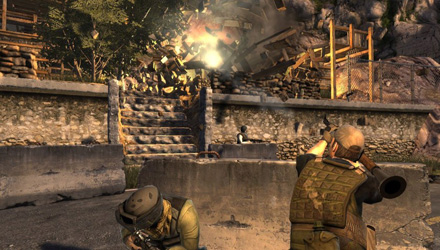 ...nah, must just be a figment of my imagination, surely

In all honesty there’s little else I’ve played on the Xbox Live Arcade that has more value or has given me more enjoyment than Breach. It’s tempting to tell you to all go out and buy it unconditionally, but alas, there are too many technical issues to let me do that. If Atomic Games get their arses in gear and patch Breach up it’ll be a fantastic game, but for now it certainly wouldn’t hurt for you to give it a try.