It surprises me that it has taken this long for a true Captain America film to materialise. The guy is the First Avenger, the ambassador for all things America, and has an ultra cool boomerield (that’s a boomerang shield for the uninformed! Although, I may have just made that word up…)

Yet, it’s only in 2011 that we’re finally going to get a full-screen adaptation of the star-spangled, tights-wearing, war-winning superhero. Accompanying it, is the inevitable game-to-film cash-in effort. “We’ve heard this one before, haven’t we?” You say.

“Well, perhaps not”, says I… this one is actually quite decent.

SEGA wants YOU!
Captain America is a 3D beat-’em-up, collect-em-up, jump-em-up, whateverelse-em-up endeavour, and yes, shock of shocks, it’s actually entertaining. The game features voice acting from film lead Chris ‘Don’t mistake me for that ginger git’ Evans as Steve Rogers: Super Soldier, but is very loosely based on the actual plot of the movie. Basically, you don’t get to sandbox as a weedy Steve Rogers. You won’t be tripping over your own feet and breaking your hand after punching an enemy, having them laugh in your face, and giving you a wedgie so far up your ass you skid mark the other side of your pants.

Nope, you conveniently skip all of that (I’m sure a Facebook group has already been made petitioning this, claiming that SEGA are being Muscleists and that they are discriminating against the puny and pathetic – shame on them!) You go straight to the part when Rogers dons a leotard and flashes cheesy grins. Despite the script changes, the game eventually reaches the same conclusions as the film, narrowing it all down to HYDRA and Red Skull, but you won’t find any origin stories here.

However, much like the film, the game follows a World War 2 theme, which has taken a bit of a back seat in gaming recently (unsurprising, seeing as it was in almost every game last gen!) While it doesn’t recreate the powerful propaganda of Wolfenstein or the true tension of war in the original MOH/COD, it does a good job of keeping the experience authentic. In fact, it helps create something very fresh for the comic book hero in gaming (much like the film it is based on). 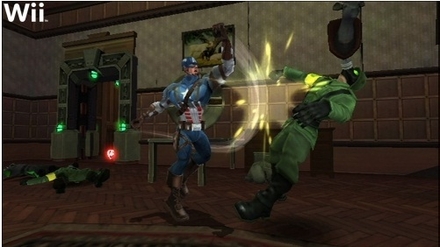 Cap uses his best weapon. Not his shield, his unusually shaped arms!

Party like it’s 1944
Wondering how much waggle to put into Captain America? None. Nope. SEGA obviously don’t think that jiggling your wrist from side to side with something in your hand is the way Cap should be navigated. Sorry if you nicknamed your genitals after Marvel’s elite superhero, but this game clearly isn’t for you!

As expected, Cap moves around with the analog stick, and fighting is handled by tapping the ‘B’ button on the Wii remote. You can also counter your enemies by hitting ‘Z’. Where the Wii remote comes in handy is controlling Cap’s shield. By holding ‘C’, you can use the Wii remote to aim and release at the target you’re aiming at. You can also block bullets with your shield, by holding ‘Z’ at any time. This can also deflect the bullets back onto enemies.

The combo system works quite well. Cap produces different moves within the combo, and those moves are named as you build up and up. The better your combo, the more powerful your attacks. With only one means of attack though, the combat does become quite stale; less about ability, and more about how well you can mash one button. The moves also become quite repetitive to watch. After a few exchanges, you’ll probably have worked out flaws in Cap’s offense, and figured out a way you could bring down the First Avenger yourself.

Backbreaker?! Pfft. I’ll just kick him in the balls and gouge out his eyes. Go me! 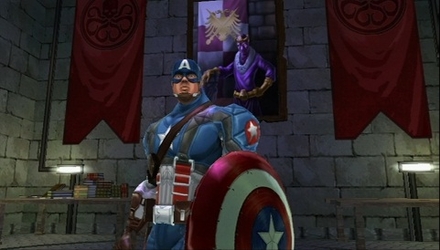 This is the campiest picture I've ever seen...

Anyway, after he’s done beating around Nazi HYDRA people, Captain America also collects stars from their fallen bodies. These stars give Cap more experience and enable him to improve his abilities. Whether you want more health, an indicator on-screen to show you where secrets are held, or your shield to do more damage, it’s up to you which path you choose.

There’s also a lot of side quests to do within each level. Every level has bombs left in wait by Red Skull, and soldiers who have been left stranded. By disarming bombs and rescuing soldiers, you unlock extra concept art (woohoo!) for you to look at in the menus. Let’s face it though, as incredible as the handiwork is, nobody really looks at those (except for maybe the mothers of the designers, or students studying at art school). Harsh reality there team; sorry…

There’s also Zola Challenges, which require you to do something within a limited time frame. Defeat five enemies in fifteen seconds, or smash seven targets within twenty. Some are stupidly easy; some get deceptively hard. These are entirely optional, but they do add a bit more depth to the game. 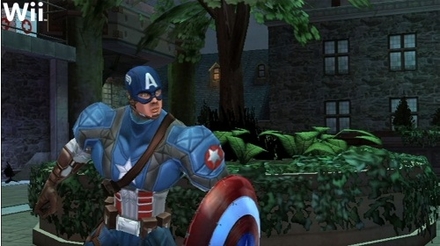 Seein’ stars ‘n’ stripes
Pleasantries out of the way, Cap’s graphics are grainy and sub-par. Sure, there are modern-day motion controls, but without the HD graphical horsepower, this version of the game really looks behind the times. So bad are the graphics that they seem to be the equivalent of the original Spider-Man games on the PlayStation. While that was excellent for its time, we’re talking nearly a decade ago. Frankly, that’s not really an acceptable standard in 2011. Add to the fact that the Wii sounded like it was ready to explode every time it loaded the game, and it does make you realise just how dated the console really is. To be honest, if the Wii can barely handle Cap, it’s no wonder that many devs have stayed away from it this gen.

Flying the flag
The sound isn’t much better either. Sure, Chris Evans may be talking, but it sounds like he has swallowed a pack of tampons and got them lodged down his thorax. The same goes for the rest of the cast, and all the other sound effects in the game. No matter how high the volume is on your TV set, you will really notice the lack of crystal clear, high definition sound. Frankly, there’s not a good word to say about the look or sound of this game. Unfortunately, this will always be an issue with Wii games in 2011, and unlike Nintendo’s first-party efforts, I wouldn’t exactly call Cap a timeless classic that has unwavering charm no matter how it sounds or appears.

If you can deal with that, then you might just get on okay with this, but don’t come into this version expecting anything better than bunk.

On the other hand, the script isn’t actually that bad, and while some of the line delivery is exceptionally cheesy, the speeches could definitely be a lot worse. Provided you put the subtitles on, and can actually read what’s being said, that is. 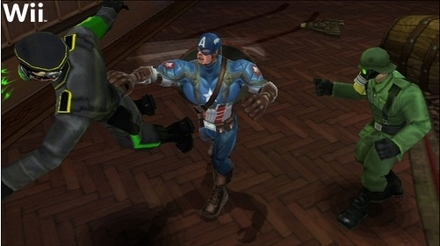 To be fair, it's better than it looks here!

Retreat or surrender?
Despite all of this, Cap is better than expected, and manages to get some things right. The game certainly exceeds your typical movie-cash-in, and seems to combine all of the different gameplay styles very well together. From the fighting genre, to platforming, and even some Zelda-like tendencies with button pressing and shield holding and throwing, the game does a good job of keeping it all together.

Unfortunately, the game does become quite repetitive as you go. Around the third level, the tedium started to set in for me with the same collectibles, the same hit combos, and only slight changes in the backdrops. It’s entertaining enough, but it’s not got lasting appeal.

However, if Cap is any indication, I want to see SEGA handle the duties of the inevitable Avengers video-games. They’ve handled the franchise well, and despite it not being anywhere near the quality of Arkham Asylum, they’re definitely moving away from the stigma of being completely craptastic.