There are few games that can boast such incredible horse power that only a select few machines can handle them and make a somewhat playable experience. Back in 2007, Crysis was one such game, renowned for its overwhelming system requirements and face-melting visuals. With such a legacy, it’s little surprise that the thought of it ever coming to consoles remained a pipe dream.

However, with the arrival of CryEngine 3, designed with consoles in mind, the reality has finally materialised. Now that Crysis is finally ready to hit Games on Demand, the question is, has the market moved on?

We can haz it nao?
Crysis is a masterclass in First Person Shooting. With an overall mission structure for you to follow, several side missions you can optionally pursue, and multiple ways to achieve your end goal. Whether you prefer to adopt a stealthy approach, or go for an all-out assault, Crysis was one of the first games to really give you a freedom of choice, and play the type of game you want to play. Because of the running joke of how all-powerful and omnipotent the game is, many forget or aren’t even aware of just how important this was to the genre.

The game is set in 2020, where the Raptor Team, a division of the US Army Delta Force, are called to the Lingshan Islands after receiving a distress call from a team of American archaeologists. Their job is to evacuate the civilians and secure any valuable information they may have. Raptor are a specialist team equipped with Nanosuits that are capable of various different functions, such as higher jumping, increased armour, cloaking and superhuman strength. Those attributes turn out to be quite fortuitous, as it’s not just North Korean Forces patrolling the islands and taking captives, there are also other-worldly entities wreaking havoc.

Throughout the game, you will play the role of Nomad, complete with all of his incredible abilities. You will regularly receive advice from your chief in command, Prophet, about how to tackle your missions, but essentially, it’s up to you what you do. Nomad can clamber into a vehicle and blow the enemy sky-high, he can stick to the bushes, camouflaging himself against the leaves or he can sprint in with his weapons and take everyone out, one by one.

That’s the beauty of Crysis. It gives you the guidelines, but it lets you do whatever the hell you want with them. 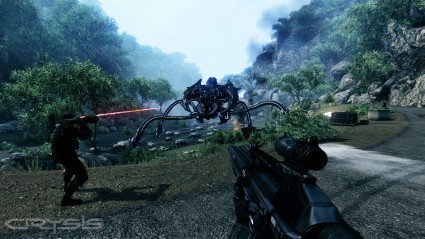 Cloak engaged
Crysis has received some control tweaks from the PC version of the game, making this console version much more accessible for those who played Crysis 2 earlier this year, and easier to alternate between the Nanosuit abilities.

Crysis is still an incredibly entertaining game throughout, with plenty of dramatic sequences to sink your teeth into, forcing you to contemplate strategy and use each of your abilities to survive. There are few First Person Shooters that can achieve this level of balance and variety, and even though we’re playing a nearly five-year old game, this still feels very fresh, and at times, even beyond its successor.

Technically, there are a few issues that are more down to dated coding than poor porting. The enemies do tend to get stuck on some of the environment, and are sometimes overly alerted by you even if you are well concealed. This can also work the other way, as sometimes you can be convinced that you’ve been spotted, yet nobody is on alert. It does make the A.I. erratic, and less human-like when compared to some of today’s offerings, but they’re still very competent. In fact, sometimes they can be overly competent, and you can find yourself face down in the dirt, quicker than you’ve had a chance to put up your shields.

We’re also at the mercy of an, at times, ruthless checkpoint system. Rather than giving you the option to save at anytime, Crytek have decided to just tell us when they think it’s a good time to break up the action. More often than not, their judgement is quite cruel, and does cause a sense of tedium and frustration to set in after the forth or fifth reload.

They’ve also taken a leaf out of Deus Ex’s checkpoint system, in that they don’t care if you’re at the point of death before saving. Crysis will checkpoint you when it sees fit, and if that means one bullet will put you down every time you reload the game, then so be it. It’s also worth bearing in mind that once you choose a difficulty setting in the game, you cannot change it at any time, and you will need to completely restart the campaign if you’re finding things easy or overly hard. Don’t say I didn’t warn you… 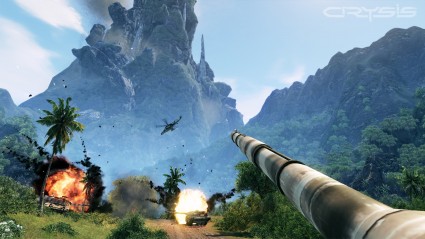 It lets you tackle things how you want.

Nanovision enabled
It’s ironic that a newer engine had to be created for an older game to finally appear on a gaming console. Crysis hasn’t suffered for that, though. In some ways, it looks better than ever. Sure, it may not look as glorious as some of the mods that have been put together since the games original release, and it may not be at the standard of a high-end rig playing Crysis 2, but what we do have here is still a very attractive, very accomplished port.

The frame-rate isn’t as smooth as you’d expect from many modern-day offerings, but Crysis compensates for that with all-new lighting and effects in this version of the game, bringing the jungle and indeed other areas to life as never before. Full Stereoscopic 3D support is also bundled in with the package, allowing you to take your adventure with Nomad in exciting new directions.

Don’t rustle the grass
Much like the graphics, the sound has also had an overhaul, taking full advantage of the rustling trees and crunching branches to bring you deeper into the fiction. The wonderful thing about Crysis is that it introduces strong Science Fiction themes into very real settings. So, you’ve got the wonders of nature chirping around you while the bullets fly, but you’ve also got the techno presence of the Nanosuit blurting and bleeping at you as you change your stances in battle.

Along with a great Sci-Fi story, you have compelling voice acting performances. Learning about this elite outfit, the Nanosuits, the alien invasion and the North Korean uprising from these strong-willed, determined, superheroes blends in comedy, suspense, anger, and passion. This heightened sense of reality is well grounded by these identifiable individuals. 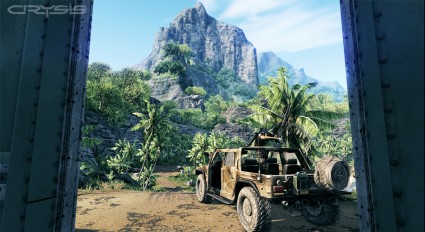 Beautiful vistas can detract you from the action!

In a Crisis?
Crytek have done the impossible. They’ve brought Crysis to consoles with minimum sacrifice, and it still plays like a dream. Sure, there is no online multiplayer component, and neither Warhead or Wars expansions have been included, but this is still a full and entertaining package.

What’s been a well-kept FPS secret by gamers with high-quality gaming rigs is now available to a wider audience than ever, and at the bargain price of 1600 MS Points, could not be a more essential purchase.