I remember my first thought when I fired up DOOM 2 over fifteen years ago; chainsaw! The hype had been unreal at the time, the ability to wield a chainsaw and double barrelled shotgun in a game was unheard of and lathered in controversy. So, naturally, the first thing I wanted to do at 12 years of age was to slice somebody up. My excitement, for something clearly so deranged, is actually quite unsettling, yet that didn’t seem to bother me in the slightest at the time.

Now I’m 27, and while the thought of picking up such artillery in the re-imagined version of DOOM 2 didn’t nearly have the same impact on me, the moment I fired up the game and heard the opening track, stood behind two marines poised for battle, I knew exactly where to go, I knew exactly what to do and I was ready for action!

The question is, for 800 Points, were these memories of a gaming yesteryear really worthwhile or should Bethesda have stayed well away from putting their name against a fifteen year old game? Read on to find out more…

DOOM 2 obviously follows on from the events of DOOM, still set on hellish mars with a sole marine fighting for his existence amidst a slew of horrific beasts and tortured souls. Lets face it, DOOM wasn’t remembered for its story, it wasn’t revered as the grandfather of the FPS genre because of its ability to weave a captivating narrative. It’s because of the ability to terrify, to place the player against utterly unfair odds, to force you to turn the corner of one creepy corridor to the next and face wretched evil abominations that have utter bloodlust in their eyes and resentment in their gut for your living presence. That’s your story. One man armed to the teeth and a crapload of hell desperate to bring him to his knees. There is no real story to speak of here, because these were the days of collecting red, blue or yellow keycards to open doors, and pressing a button to exit a level. The things developers could get away with back then, eh?

Taking that into consideration, unfortunately both Nerve and Bethesda cannot escape the reality that DOOM 2 is an aged game. Even with some fine-tuning (mostly just adding a bit more colour and outline to the characters and locations), this game does look old and haggard. It probably appears that way to us due to the amazing development in technology from the nineties to the noughties, however, to me the pixels seem much more prominent, there is limited mobility in NPCs, no chance of jumping and no way of aiming with the right thumbstick. Nerve have kept it all in there from ID’s original vision, whether you like it or not. It’s also worth mentioning that on my 28″ flatscreen TV, the game could not take up the full screen. I understand that this game was probably never designed for modern day technology and that trying to stretch the game any further would be completely detrimental to its quality, but its still difficult not to notice something like that when living and gaming in 2010. 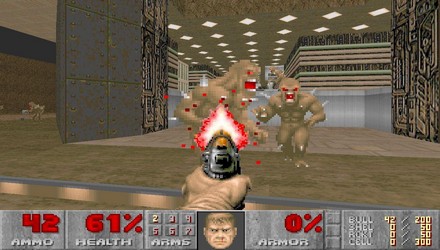 The controls seem pretty suited to an Xbox pad and even though this game would have been played primarily via keyboard back in the day, you can play the game pretty effortlessly on Xbox 360. The right trigger will utilise the weapon in your hands, whether that is Chainsaw, Shotgun, Pistol or the BFG and you can cycle through your weapons quickly by pressing Y or B. Pressing the A button will cause your marine to interact with the environment in an effort to open a secret passageway full of goodies or just to press him up against a wall, allowing him to make very disturbing grunting noises. To move around the place pretty quickly, all you need do is hold in left trigger and you will move at a super human speed which is both a really useful and good feature in this port, especially if you remember DOOM can be quite generous with its level length.

The one area that seems the most remastered in this port is the sound. The sound effects of your player breathing heavily still make him sound like a possessed goat and the alarm of all the men and monsters still sound the same when you bump into them, but the music has been changed quite a bit. Granted, that’s not necessarily for the better, as sometimes you might mistake yourself for playing The Secret of Monkey Island when bobbing and weaving along some terrain, but its definitely undergone some changes. Unfortunately, the new take on sound can impact on the atmosphere that DOOM has always prided itself on as it doesn’t really capture the sci-fi horror feel, and any sense of pulling the player away from that sensation is quite devastating to the whole product at this stage of its lifespan. That said, you will still feel as if you’re playing a DOOM game with the sounds of the chainsaw going full throttle and the ‘blam’ of a shotgun piercing craters through life forms of all distinctions. 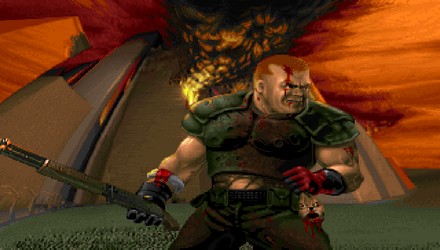 Its the rabbit that got it!

The other new aspect you’ll find in DOOM 2 is the ability to play local 4 player splitscreen, all collaborating on the same level to focus on its completion, something that would have been either unplayable or impossible fifteen years ago. The game also includes online co-op and deathmatch, which is considerably much easier to set up and play than when connecting to each other through dial-up modems. Playing split-screen can be a convoluted affair and as the game is quite pixelated, the reduction in screen size really does make it difficult to see where you’re going and will force you to squint, especially, as I pointed out earlier, as the game does not take up full screen on most modern day TVs (with mine generally being smaller than most).

The game does also struggle to keep up sometimes, when the action gets a bit hot and heavy and there are multiple people on the screen at anyone time, the engine struggles and has to work overtime to ensure that it works to a passable standard. Again, this is the problem of porting an old game to modern day systems, as the game was probably never designed with such foresight and finds it difficult to compete with the norm in most retail games available today. The online component works ok, the servers seem pretty stable, but does also suffer from stuttering and stammering quite regularly, if, as I said before, the game gets overloaded. Still, its nice to see a game utilising local multiplayer, which is becoming more and more of a rarity these days and it is very commendable that they have taken these same features online, while still including a deathmatch mode where you can compete against your friends, as well as alongside them.

All in all, this is a pretty full package. The normal thirty two map DOOM 2 campaign is included, which is quite a full experience in of itself, but the package also includes an expansion created especially for this remake, ‘No Rest for the Living’, which is a nine map homage to the DOOM legacy, most notably DOOM’s first episode, Knee Deep in the Dead. The game also ships with an online and local component, which is an attractive short-term diversion from other gaming experiences. All things considered, I really did enjoy my return to DOOM 2 and felt satisfied by the amount available to me.

Yet, I couldn’t help but wonder if this was a missed opportunity and thought how cool it would be if DOOM 2 had been allowed to live with a whole new graphics set, perhaps bringing it up to the same standard as the graphical monster DOOM 3. How would this game look, feel and play if it was given a completely fresh coat of paint comparable to the standards of today? That said, for retro lovers such as myself, I’m also glad that its been maintained this way, as modern day players can see how much gaming has truly changed in the last decade and get a real taste of how much first person shooters have  evolved. DOOM 2 was a standard bearer for the FPS genre and  forced all other devs to raise their game to the level at which they’re at right now.

Basically, if you didn’t grow up with DOOM 2, if the thought of dipping into some retro to relive the ‘good old days’ is not your cup of tea, you’re highly unlikely to want this port at all. If, like me, you crave a little of nostalgia every now and again, this is an absolutely essential addition to your collection.