Bioware have always kept stories within their worlds very exclusive, and rarely outsource. It’s a testament to the quality of their in-house staff, and also to how highly they value their franchises.

For the first time ever, though, they’ve broken the mould, and allowed The Guild star, Felicia Day, to help create her own character within the Dragon Age world, pen a web series based on their popular franchise, and star in a piece of downloadable content featuring her newly created character.

A nerd’s paradise, for sure, not only has Redemption started airing on YouTube to rave reviews, now Mark of the Assassin has infiltrated gaming marketplaces. However, with Dragon Age II being a sore spot for many, and the victim of regular trade-ins and dust collection since March, can even Day enrich the franchise with her natural charm and enthusiasm?

Legacy was a decent return to form for Dragon Age II. It was short but, as I eluded to in my review, it was also quite sweet.

Fortunately, Mark of the Assassin manages to take that pedigree one step further. The expansion starts explosively with Hawke and his associates being ambushed by the Antivian Crows, an elite organisation of thieves and assassins. The numbers are great, and the party is unprepared, all hope seems lost. Then, just as desperation sets in, the mysterious rogue, Tallis descends from the rooftops, slicing and dicing her way through the cut-throat vigilantes, managing to catch them unawares. With her aid, Hawke and his associates quickly regain their footing and vanquish the threat.

In awe of her abilities, Hawke quickly offers his ear to Tallis, and conveniently, Tallis has a motive for helping out The Champion of Kirkwall. She wants to steal a jewel called ‘The Heart of Many’ from an Orleasian noble named Prosper. Tallis’s desire to claim the jewel is driven by a belief that Prosper has no right to possess it. Beholden to the elven rogue and clearly a little bit infatuated by her, Hawke agrees and so the group take a journey to Prosper’s estate.

However, nothing is ever quite so simple in Hawke’s world. Upon arrival, the group are encouraged to take part in a hunt to bring back the head of the largest Wyvern they can find. With no alternate path into the estate in sight, Hawke takes on the challenge with Tallis by his side, and together, they attempt the nigh-on impossible feat. 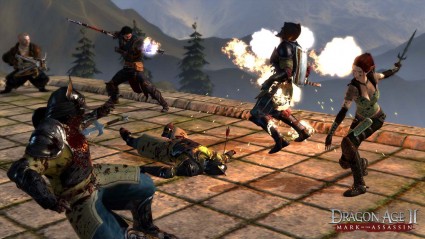 Hawke and Tallis in combat!

MOTA is a very diverse DLC, going from hunting, to mingling at a party, and then stealthily infiltrating the estate. There’s a real mixed set of gameplay types that beautifully showcase what Dragon Age is capable of, and what the main game should have been doing back in March.

The story is also well conceived, with Day’s character naturally being the star of the show. Tallis is a very multi-layered character who shows signs of strength, compassion, determination, and even selfishness. She is also very quick-witted, and regularly challenges Hawke’s bold, tongue-in cheek, and sometimes, callous demeanour. Unlike some of Hawke’s companions in Dragon Age II, Tallis is a very interesting character, and one you will actually want to learn more about as the story progresses.

MOTA even includes a surprise cameo, and one that definitely hints toward a bright future for Day’s character within the Dragon Age Universe.

Graphically, the virtual Tallis does resemble Day quite well; yet, I couldn’t help but feel her eyes were over-sized. I know that’s a bizarre criticism, and this was only really noticeable during close-up interactions with other characters where you can see greater detail in the main cast of Dragon Age II when compared to Tallis. Unfortunately, it is something my attention was drawn to more than once. Perhaps I pay too much attention to Felicia Day’s eyes? Is that a bad thing?

Felicia’s voice acting is also perfectly suited to the Elven Assassin. Her timing and delivery help build the character to great effect. Although, the continued volume issues still plague this DLC as they did in all of Dragon Age II. The combat grunts and groans are overly loud, whereas the dialogue within the story is practically hushed to silence. It’s also very noticeable that Felicia recorded this dialogue in a studio, as there are regular echoes in her speech. 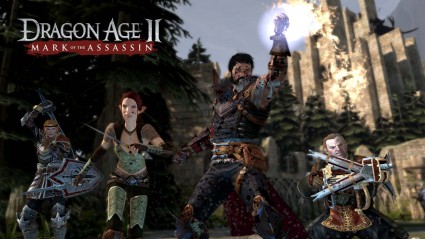 Something else I noticed is that this does feel like familiar ground for Bioware. One only needs to look at Kasumi’s Stolen Memory in Mass Effect 2 to note the comparisons. That’s not necessarily a bad thing however, as both DLC’s are very entertaining in their own right, and do different things with their respective stories. Still, by putting the two side by side, you will definitely notice the parallels.

Ultimately, though, Mark of the Assassin is a triumph. It’s full of adventure and intrigue, easily overshadowing Legacy, and leaving us to wonder just how rich and fulfilling the main game could have been had Tallis been a part of it. It’s a pity you can’t start the game anew, and use Tallis throughout Dragon Age II.

Either way, Bioware have clearly heard our criticisms, and they’re definitely doing something about them. Mark of the Assassin is an entertaining yarn, and not just the best DLC Bioware have made for Dragon Age II, but one of the best DLCs I’ve seen in a game this year.