Playing Bioware’s Dragon Age Origins reminds gamers of the old days of role-playing games. Slaying vile abominations, drinking fine ale, frolicking with fair maidens and handsome rogues while involving yourself in vast amounts of dialogue and lore. While perhaps not the companies finest hour, Dragon Age proved that Bioware are still the masters of telling an amazing story and creating captivating and memorable characters. For more on Origins, read the full review here.

Since the game’s release in November 2009, Bioware have continued to shower the game with an incredible amount of content, including a full blown expansion and several side quests, enabling you to recruit new party members and explore fresh terrain. This article will look at the downloadable content available for Bioware’s innovative role-playing game and tell you what’s good, and what’s not so good. Please be advised, some of these reviews may contain spoilers for the content held within Dragon Age Origins, and it is advised that you have completed the main quest before reading any of the content contained herein…

Awakening follows on from the events of Dragon Age: Origins, allowing you to import the ‘Hero of Ferelden’ into the game so that the story may continue.  As you start Awakening, you will find your character travelling the open road alongside two companions, now appointed Commander of the Grey Wardens and heralded as a hero. For now, it seems, there is nothing your character cannot accomplish and no threat tangible enough to thwart such a being.  However, as you continue to travel, conversing with your new companions, taking in the fresh air, all of a sudden you are warned of an impending attack and are suddenly thrust into a life or death situation, swords withdrawn and finding yourself up against the Darkspawn, which you may have assumed were quelled during the destruction of the Blight in Origins. This alone is surprising enough, but as the battle is won, so the plot is allowed to run deeper and so you find yourself involved in something much more sinister than simple waves upon waves of Darkspawn. It seems Origins only introduced us to the tip of the iceberg.

You see, unlike in Origins, the enemies are different in Awakening. The Darkspawn are evolved so they can meet your more resolute abilities, they are stronger, they are more intelligent, now able to articulate themselves in your native tongue and they seem to serve a greater purpose, one, that indeed, threatens the balance of the World. Then there are the children, worm-like creatures that attack in swarms, which can overwhelm and devour you, and equally reminding you of something from the film, Tremors. All of these entities serve the will of a creature known as The Mother, who looks something of The Princess from World of Warcraft, but definitely better endowed.

So, to combat such a new and fearsome threat, your character will need to form strange, unlikely alliances and reacquaint themselves with familiar faces from the past. All the while, this is sown together by a solid, seamless narrative arc that does not seem to have been slapped together as an excuse to lengthen the game and steal your money.  This is a natural follow-on from Origins and indeed from the word go to the impending conclusion, you will find yourself remembering the things you loved about Dragon Age Origins, and indeed, the things you hate. 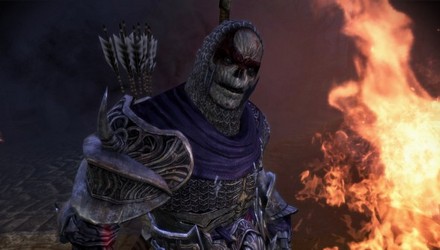 This guy does more than grunt!

There are also story arcs within Awakening that sync up with your character’s individual origin story and play a significant role within the context of the game. Meaning, whichever character you brought from humble beginnings will need to face their own individual past throughout the context of this expansion.

This is exactly how expansions to main games should be. A suitable length, enabling the story to breathe, to flourish and remain tangible so that it isn’t constrained by time. It should also support the footwork already put into place by the original and synchronise with the adventures and the words already outlined by the original game. Awakening does this effortlessly and still manages to reveal things that you did not already know about the story and introduce a whole host of new characters that will charm you, scare you and force you to consider your choices when conversing with them.

Unlike in Origins, the loyalty scheme isn’t as important in Awakening. You can still bestow gifts upon your team mates and this will make conversations with them generally more pleasant. However, you won’t find yourself rolling around in a tent with any of your new comrades even though the ability to flirt does tease this regularly. Your relationship with these characters, both old and new, is very different to the one your character had with the original band in Origins. You won’t have open, drawn out conversations, rather you will both speak to each other about a statue and both of you offer to one another that statue’s significance, what it symbolises, what it means to each character’s individual beliefs. This is a smart move by Bioware, as it allows relationships established in Origins to remain untouched, whether you meet such characters within Awakening or not and still allow your same character to bond with an entirely new cast.

However, as I mentioned earlier, all the same problems that were in Origins, inevitably remain in Awakening. I played this on Xbox 360 and I can tell you that if you hated the control scheme for the combat within the game or how you interact with objects in the game World, Bioware have done nothing to improve or change this. The annoyance of having to use three buttons at a time just to perform a simple command is still there, and clearly telling console gamers that this was designed as a PC game from the ground up and that they are just going to have to make do.

Also, there are still some horrific graphical glitches that will sometimes see your character stuck in a fall of rocks when you were nowhere near them, and the entire screen can sometimes turn black for a period of time if you move the camera in a way the game doesn’t like. The game still has radiating beauty within it; many of the beautiful set-pieces you came to appreciate in Origins are still supported in Awakening, offering new, fresh landscapes for you to drool over. Yet, many of the same textures and environments used in Origins have still snaked their way into the expansion, which more often than not smacks of laziness, as opposed to familiarity of the World you are being drawn into. Also, as I cited as a problem with the original game, many of the quests seem aimless and can just see you run around blindly, collecting items here, there and everywhere, and just saunter into villages and giving them to the first person you see. You can happily glaze through a lot of the quests in-game without having to even ponder an outcome for a split second, which is nice for a time, but becomes quite empty as the hours draw in on Awakening.

The sound effects are much of a muchness as well. The music has remained mostly the same, with the background tune on the title screen still the same, remincsant of something you can listen to on the Lord of the Rings soundtrack. However, the voice acting is fresh and is as spot on as ever, with the majority of the actors conveying the right amount of emotion to the script they are given for their characters. This also adds a lot more impact to the smaller, side stories that are involved in Awakening and can really bring these characters to life, whether they are on your side or not. While many of the sound effects and music remain the same from Origins, it is the voice acting that stands out.

To put it simply, this expansion is absolutely essential to you if you enjoyed Dragon Age: Origins. You could quite happily forget the other smaller DLC packs Bioware have released, only purchase Awakening, continuing the main story arc based on your decisions in Origins and feel utterly content. If you didn’t enjoy Origins, then you should stay as far away from this as possible. It won’t change your mind, it won’t make you happy, Awakening is one for the fans and that’s as it should be. For my money, Awakening is a great expansion to an already great game, celebrating the high points of Origins such as a terrific storyline, the simple yet dynamic combat system and the excellent cast of characters but it also inherits many of the original games previous flaws, such as horrific glitches, occasionally infuriating controls, rehashed textures and sound-effects and mindless quests.

It’s unclear where the series will go once you come to the closing credits. There are certainly several directions the company can take based on your decisions throughout the course of Origins and Awakening, but that will be up to Bioware to decide. However, to summarise, Awakening is the best expansion to Dragon Age: Origins to date, and will give you an additional twelve to fifteen hours of playing time, depending on how much you intend to get out of the game. It provides a twisting, turning plot that makes sense and stands firm within the intricate universe Bioware have created.