Fallout: New Vegas is a flawed masterpiece, by now, most of you will be well aware of that. There’s many things the game has done right, aspects which set it apart from its predecessor, and established elements improved for the better. Yet, the game was lathered with appalling, game breaking glitches at launch and remains, despite numerous patches, to be a sloppily presented end product that went gold too soon.

That being said, I’ve spent many hours of my life in the Mojave Wasteland, exploring every nook and cranny, promoting myself from a mere courier, to the very element that will shape the future of New Vegas forever. By no means is New Vegas a small game, but it seems Obsidian aren’t taking any time off from the vast desert wasteland, producing even more content for their open World epic.

The question is, should you go back? Well, This Is My Joystick will throw themselves back unto the blazing heat of the sun, suffering the landscape with parched throats, scorched feet and submitting themselves to radiation poisoning and sleep deprivation to tell you whether you should invest any further into Obsidian’s version of the Fallout series. So sit back, strap your Pip-boy on and let us indulge you with our findings.

Please note: Dead Money is currently only available on Xbox 360, however, on February 21st, will be made available for Playstation 3 and PC. From then on, all future New Vegas DLC will release simultaneously on all three formats.

Dead Money is the first of several scheduled add-ons for Fallout: New Vegas and is recommended for characters of a level 20 standard. Personally, I’m inclined to agree, as even at level 20, this DLC can be fiendishly difficult and so it’s probably not a good idea to attempt traipsing the Sierra Madre Casino if you’re less prepared than that. Dead Money also raises the level cap to 35 and adds new perks and weapons to the game.

The story starts with the courier exploring an underground chamber found in a hidden bunker, hoping to find supplies, food and weaponry. Then suddenly, the courier is attacked from behind, knocked out and left in a crumpled heap on the floor. When the courier awakes, a holographic projection of Father Elijah, a former member of the Brotherhood of Steel, appears to the courier inside an unopened Casino resort known as the Sierra Madre. The projection of Elijah says he has strapped an exploding collar around the Courier’s neck and the only way it can be removed it is to do a job for him. Reluctantly, the Courier obliges and Elijah explains that he wants the wealth found in a vault deep in the heart of Sierra Madre, rumoured to be filled with all the Worlds riches. To further complicate matters, Father Elijah has kidnapped three other individuals, Dean Domino, Dog and Christine and also attached exploding collars to them. Elijah tells the Courier that co-operation will be required by all four parties and all will have to work together to find the vault. The courier, used to facing adversity, agrees to undertake the challenge and confidently assures Elijah he’ll get the job done, however, Elijah is convinced that once the courier finds the vault, the zest for treasure will be unbearable and the relationships he or she has developed with his three ‘associates’  will be consumed by overwhelming greed, prompted by the contents within the vault.

So, the premise makes this sound entertaining, right? Dead Money makes use of the companion system introduced, with great effect, in New Vegas and is all focused on you staging one awesome bank heist for the greatest treasure known in all of the Mojave. It’s not short (the mission will take at least five hours), it raises the level cap, adds new perks and weapons and even offers new conversation with Veronica once you’ve completed Dead Money. There’s so much on offer here, this totally seems worth the 800 points asking price, right? So why does it feel like playing Dead Money was the worst thing I ever did with my life? 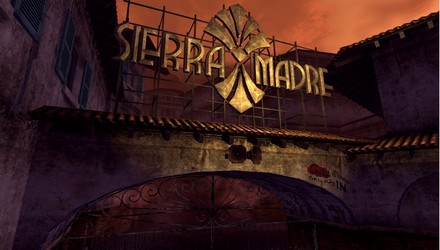 Sierra Madre. So bad, you'll be begging to leave!

Apart from the collar which beeps every time you move away from the path the game wants you to go down, Ghosts and holograms are your only enemies here, birth children of the high-tech security system that protects the Sierra Madre. Problem is, while you can gun down the ghosts, you will then need to strike them with a melee weapon to actually kill them, otherwise they’ll just get back up and continue attacking you. The holograms, however, are completely immune to any weapon you’re carrying and cannot be killed. In other words, you’ll need to sneak past them in order to survive, because if they catch you, your health bar is going to take an ass kicking! While you can see Obsidian have tried to be creative with the enemies in Dead Money, all they’ve managed to do is create something only a lifelong lover of animal roadkill could find affinity with.

In addition to collars, ghosts and holograms, scattered throughout Sierra Madre are clouds of poisonous gas that will drain your health quickly. Unfortunately for you, you will need to fly through those clouds to make any sort of progress in Dead Money. Just when you thought things couldn’t get any worse, eh? The good news is, when teaming up with companions throughout the DLC, each of them has a perk that can be used to help counter some of the effects, for example Dean Domino’s perk enables you to walk through the poisonous cloud temporarily without taking damage. This, alongside the level cap and the Holorifle, are the best things Dead Money have introduced to New Vegas. Unfortunately, that’s about all the good it does.

All of the aforementioned dangers, the ghost ninja, warrior, things, invincible holograms, beeping collars and noxious gases don’t even begin to describe the ugly of Dead Money. You’ll find all of these hazards and enemies roaming around in an area set against an empty, dark midnight sky background, and repetitive looking backdrops and corridors, only partially illuminated by dull light. Can you picture all of this? Well, you’re already getting a feel for how this game looks, feels and plays. It’s certainly a far cry from vast desert wastelands, you have to give Obsidian credit for that much, but frankly, it feels as if they have done everything possible to create the most repugnant, vile, gaming experience possible and luckily (more likely unfortunately) for them, they have succeeded. 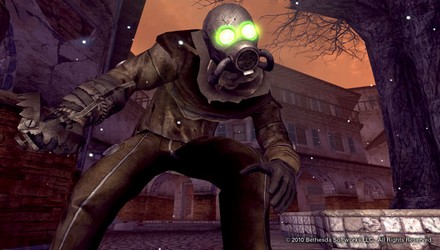 The face of hell!

I’m not going to waste my breath here, this is probably the worst downloadable content for any game I’ve ever played. Dead Money is a convoluted mess of ambition and execution. You can almost understand the driving force behind this DLC, wearing the collar throughout the game certainly does add a dramatic flair to the Fallout experience, not knowing from one corner to the next if you’re going to stray too far off the path and have your head explode on your shoulders, yet its managed to convert one of the most open World gaming experiences of all time, turn it into a confined, constricted, linear hell-hole and introduced the most nauseating, rancid beeping noise into the Fallout World that will give you waking nightmares for weeks after!

To top it off, I didn’t even mention that it’s glitched worse than the main game! The amount of times Dead Money locked up my Xbox during play, or had my character frozen solid to the ground unable to fire his weapon or corrupted my autosave file and thus all of my other New Vegas saves? It’s so bad that I couldn’t even leave Sierra Madre once I was done with the DLC! I had to reload a previous save game from before I started the expansion and basically had to continue playing New Vegas as if I hadn’t played Dead Money at all. Never, in all my time playing Xbox 360, Playstation 3 or Wii games have I come across something so bug filled and careless. This is coming from a company that are supposedly considered to be a AAA developing house and they’ve released an end product like this? Absolutely appalling..

This isn’t Fallout, I don’t even know what this is, but it’s not fun and it’s not entertainment. It’s about as fun as being sat next to a ringing phone all day and not being able to answer it because you’re gagged and tied to your chair. Dead Money is horrendous and makes me physically sick to the stomach to even think about it. Hell, it’s so bad, I think I would rather play Barbie: Groom and Glam Pups instead and I never thought I’d say that about any game!

Playing Dead Money was the most depressing, demoralising thing I’ve done gaming wise in a long, long time and I implore you to keep your distance for the sake of your soul and your sanity. No amount of selective press will stop the fact that Dead Money utterly sucks and is an absolute disgrace to the Fallout universe. Supporting this sort of ‘entertainment’ by buying it is like giving your money to a neighbour who, you’re well aware, is going to head down to a local store, buy a knife and stab you repeatedly with it. If this is the trend of New Vegas DLC we can come to expect, then really, you might as well put your anticipation hat on for Fallout 5 and wait for that. This will make you regurgitate what you’ve already eaten, not make you hungry for more…