It’s not often that we review iPhone games on this site of ours. You see, much like the entire catalogue of the Wii, the good stuff is far outweighed by the sheer amount of shovelware, and who can be bothered to browse through the thousands of games to find something worth reviewing? Occasionally, though, developers and publishers will email us directly to pitch their game, and we decide whether to review these or not on a case-by-case basis. On Friday I received one such email from the PR of Canada’s Arctic Empire.

They certainly talked the talk when it came to promoting their newly relaunched puzzle game, Galaxy Express; with a witty pitch involving YouTube clips of Sean Connery voicing a dragon, which clearly just demanded my time. With my interest piqued by their humour and confidence, I set about to see if Galaxy Express was worth its new price of just under a quid…

I’m descending to outer space!
In Galaxy Express, the story is pretty simple: Players will try to help interstellar delivery boy, Jonathan Rowe, as he attempts to deliver parcels around the universe, avoiding meteors, space pirates, and other dangers that get in his way.

There’s no real overarching storyline to take notice of, but the elements of what does exist is done in text through wittily written banter between Jonathan and the supporting cast. The cast including his ball-busting boss, Bluckerman, an Android female called Kim-bot, and even some of the villainy that rule the universe.

While it’s charming in its presentation, the story doesn’t really serve any purpose other than acting as a vehicle for the general theme, but it’s entirely successful in what it sets out to do. 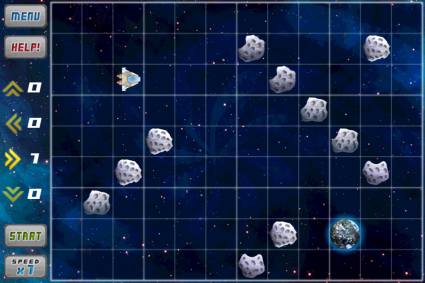 Plot me a course for Rigil 7!
The core gamplay of Galaxy Express is extremely simple. It sees you start each new level with a grid, Rowe’s spaceship placed somewhere on the map, and a destination planet for you to reach. To reach your destination, you must drag the available directional arrows from the left-hand menu and strategically place them onto the empty spaces on the grid. Once done, you hit the ‘Go’ button, and watch Rowe’s ship move along on its own, following the course that you set for it. If you’ve plotted your course right, he’ll arrive safely at his destination!

Sound simple? Well, it gets much more difficult. The game soon starts throwing variables into the equation, as you need to navigate around asteroids and other such obstacles. As soon as you get a handle on that early on, it starts to give you moving objects in pirate ships, which you must avoid at all costs. This brings in a new twist on gameplay, as other ships will use your placed arrows, meaning that at times you’ll need to shift them out-of-the-way in other directions as much as you need to direct Rowe.

Further in, you’ll also have to deal with black holes, cannons and bombs. It’s in this way, the game keeps evolving just as you think you’ve got it figured, keeping it challenging and fun throughout. It can get rather chaotic trying to manage all these factors later on, but thankfully, you can’t die; you just hit the stop button and start your arrow placements again.

Over the 120 puzzles (some of them bonus levels), there’s a decent, progressive difficulty level in effect that’ll prevent you from tearing your hair out, but at the same time it offers definite challenge. You won’t find big jumps in difficulty, but just enough of a change to make you feel like a genius when you work out a solution.

I did have one minor niggle over the course of my playthrough. Should you hit a line of stationary obstacles or the outer border, Rowe will turn his ship right to travel along this wall. I’m not entirely sure why clockwise was the direction chosen, as frustratingly there are a couple of levels where if he’d have gone left, which he was quite free to do, he would have reached the destination planet quite easily. This means that a solution is not always as freely available as the game will have you think. Still, at times you can use this to your advantage. 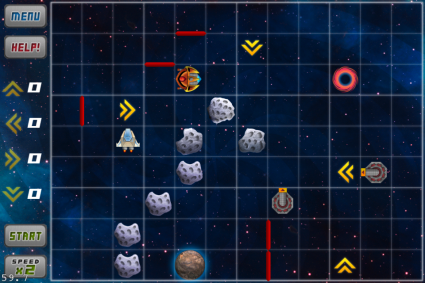 ...and gets a tad more difficult!

There are some other cool features that offer the levels some replay value, such as the ‘Online Best’ feature, which tells you who completed the level with the least arrows, sure to push on folk with competitive streaks to try and best the levels more efficiently. Possibly the best feature isn’t even implemented yet, and that is the teasingly greyed out option on the main menu, labeled ‘Level Builder’… Oooh! The possibilities!

Simplistic cartoon fun
Graphically, the game doesn’t need to do a lot, but what it does, it does well. All the characters are polished, cartoon cutouts, and the action in gameplay looks pretty enough in the Retro style that the designers have shot for. A lot of graphical polish is lost on other iPhone games, as your hands cover most of the screen, but due to the strategic nature of the gameplay, you don’t really get that here. It’s not going to blow your mind, but it’s a cute little game, certainly.

Spacey sounds!
Arctic Empire have just about got it right with their selected audio, although with the type of game you’re dealing with, it’s a little limited. In the menu systems you have what you’d call the main theme of Galaxy Express, which starts off all dramatic before getting a little trippy, while accompanying the actual gameplay is relaxing pads that swell and rise and just really help you just enjoy the game at the slow pace it’s meant to be enjoyed. Xen music at its finest.

Admittedly there’s not a great deal to it, but it’s very well polished.

Please, sign for this parcel!
As far as the more unknown puzzle games go on the iPhone, this is one of the better ones I’ve played. It’s charming, simple to pick up, easy on the eyes and ears, and it presents a nice challenge to boot. At just a under quid or dollar in price, you really can’t go wrong if you like puzzle games.