Remember when the first properly stylish mobile phones came about? Small enough to slip in your pocket and sleek enough to avoid looking like a prat on the bus, they sold like hot cakes. One thing that kept gamers happy was a simple little game that many people sunk many hours into; Snake. The premise and execution were perfect for the fiddly keypads. Sessions could last as long as you wanted and comparing high scores with your friends became a regular lunchtime activity. Then, with the advent of smart phones and ‘proper’ games on mobiles, good old Snake was lost in the tide.

It seems Spilt Milk Studios Ltd think it’s time to bring it back with their new game for iPhone and iPad, Hard Lines! Will it conjure up memories of playground/bus stop/office break fun or just remind us how blistered our thumbs got? Let’s find out…

There’s no story as such in Hard Lines, although the game tries to convince you otherwise in numerous different ways. Be it the mildly humorous Lionel who takes you through the tutorial, or the constant chatter between the dashes as they careen across the…

I’m getting ahead of myself. Hard Lines is essentially a meeting of traditional Snake gameplay and Tron light cycle combat. You guide a little dash around a grid-like screen, trying to eat shiny dots and avoid the trails of other (presumably evil) dashes ,while attempting to trick them into hitting your own glowing tail. This simply premise is made complicated by a range of modes. 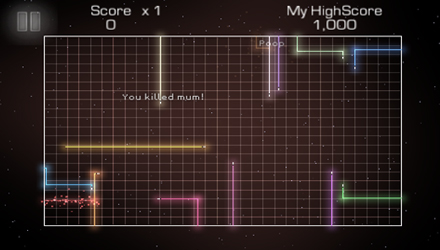 Survival covers the basic game mentioned above, with the number of enemy dashes increasing over time. Dead Line takes its cue from the massively popular Bejewelled Blitz, in giving you three minutes to do as well as you can. Time Attack presents a hungry countdown clock than can only be fed by scoring, further increasing the already fervent flow of the game. Piñata makes avoiding the other dashes a null option, forcing you to destroy them in order to consume their juicy, shiny innards. Gauntlet puts you up shit creek without a paddle, forgetting about scoring and simply throwing an absurd amount of evil dashes at you! Within second the screen is a spaghetti mess of trails and death, making this by far the most feverish and difficult mode on offer. A nice, simple version of the classic Snake rounds off the package well.

Clocking in at six different modes, you may think that Hard Lines is a good deal and a worthy purchase? Maybe, but before you can enjoy the creative application of variation on offer you’ll have to get past the awkward controls and irritating intent to be funny.

Hard to play
The main issue here is that none of the three available control types seem to work right. Swiping seems like the logical touchscreen option, but the dashes are so small your finger gets in the way, causing death more than a few times. Tapping the edge of the screen related to the way you want to go also seems feasible, until you have to react quickly, reach across the screen and again block your view. The only solid, non-obstructive system seems to be the third. Tapping the right side of the screen to turn right and vice versa to turn left. Even this simple method can by fiddly though and a momentary lapse in foes can send you crashing into your own trail.

Maybe it requires more practise to master, but I fear the generally cluttered nature of the game will put many people off before this level of skill can be reached. The dashes have an annoying habit of trying to have a conversation with you, which is obviously meant to be funny and lighten the mood, but only serves to get in the way. The words are bigger than the dashes, and I found myself cursing them as they obscured my view for the millionth time. That’s another big issue with Hard Lines; the scale.

Hard to see
The screen of an iPhone is quite small. Most games take this into account, either taking full advantage of the 3.5 inches on offer or making the important stuff big enough to see. Hard Lines, however, assumes you have eyes like an eagle. Not only are the dashes minuscule, the actual play screen is shrunk into the middle to make room for scoring above! I was literally straining to see what was going on most of the time; not good. Combine this with the control issues and you have one frustrating game. 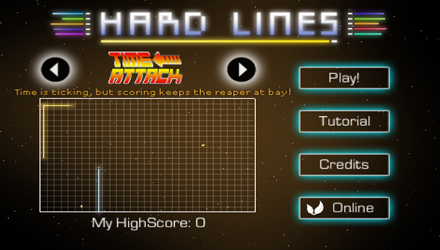 To its credit, however, the graphics are nice and shiny. The trails have a glow about them and everything is distinctly… computery. Tron has definitely been an influence, which is no bad thing. The menus are swish and serve their purpose while looking nice. Overall, the whole package looks fresh and original, even including a few sneaky homage fonts on the mode select screen.

Hard of hearing?
The music in Hard Lines is irritating, cheap techno. If that’s your thing, you’ll enjoy skidding your little dash around to that. For the rest of us, it’s annoying and mixed way too loud. As soon as you start the game it blares at you as if to say “THIS GAME IS ALL VIRTUAL REALITY AND WE NEED TO TELL YOU THAT WITH TEHCNO MUSIC THAT’S MADE ON COMPUTERS!”.

I’ve never reached for the volume buttons so quickly. Each mode has its own variation on the theme, but even the relatively sedate, tick-tock of the Dead Line mode is permeated with synth blasts and uncomfortable sweeps. It’s like someone made these tracks and a troll ruined them by throwing over-distorted synth mess over them all. The only vague respite is a mildly amusing and well-played acoustic guitar piece hidden away in the Credits. It’s sweet and the lyrics parody the simplistic nature of the game.

Other than that, there isn’t much to say really. The menus and in-game action have suitably tech beeps and bloops and it works fine.

Hard to recommend…
I feel kind of bad because Hard Lines was obviously made with love and dedication. The team obviously have a lot of creativity and flair and can pull off a nice art style. This time, however, I think the touch screen got the better of them.

Hard Lines is a mixture of frustration, bad controls and irritating sound effects. The concept is there, and it’s not a bad one at that, but the execution leaves a lot to be desired. I can’t really recommend this to everyone; there are much better things on the App Store to spend your cash on. Yet I can’t help thinking that there will be people out there who will look past the interface and the tiny screen and enjoy a refitted and up-to-date version of an old classic. So, if you’re looking for a way to relive those days of rubbing the numbers off your phone’s keypad, Hard Lines could be just the thing you’re looking for.