There are plenty of gaming series that seem as if they’ve been around for forever. Mario, Sonic, Final Fantasy, Call of Duty, Kinectimals… (okay, maybe that just feels like it has been around for forever!) While those franchises are widely revered and continuously celebrated, there are games like Harvest Moon, which have been around since the days of pterodactyls and raptors fighting over rat meat; beloved all the same, but never get the same recognition.

Harvest Moon was the original farm-simulator game, and while many of the youth today may say… ‘this is a Farmville clone…’ their ignorance speaks volumes. Harvest Moon has been running since the days of the SNES, and Grand Bazaar will represent the 19th game in the series! There; that’ll wipe the smirk off their stupid faces. HAH!

Of course, with such a rich history of games spanning a wide variety of consoles, you may wonder if this series is still sprouting or if it is time to be buried with last month’s turnips. Time to get out the watering cans, again!

It may surprise you to learn that the game I’m currently reviewing is scheduled for release on September 23rd 2011 in Europe, but has been widely available in Japan since December 2008! I don’t know what the record is for the longest time for a game to get ported to different territories, but that definitely has to rank up there. In fact, its been so long, a sequel to the game has already been released in Japan (The Tale of Two Towns), and will reach North American shores before we get our hands on Grand Bazaar! Where’s the love, guys? 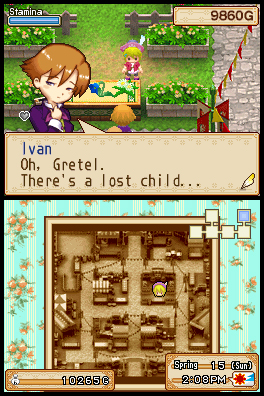 Nevertheless, Grand Bazaar offers more of the same, but in a slightly different bundle. The idea, as ever, is that you build your own farm up from scratch: planting the crops, growing them, then moving on to nurturing animals, and eventually marrying someone to share in your success. Basically, if you’ve ever wanted to be a farmer, but you couldn’t be assed to get up at 5am every morning, smell of fertiliser and roll around in shit all day, this is a dream come true.

However, this version of the game offers some slight changes. Players can now go to a bazaar in the town, and sell items to other people in the city. The mayor of the city will also judge a competition for the most profitable shop. If you rank high enough, you can win a selection of prizes, and if you continue to rank highly, then more shops will start to appear within the bazaar.

For newcomers to the series this offers a nice entry point, but there are also familiar elements in the game that have been popular amongst experienced Harvest Moon players, and even some familiar faces who make an appearance. 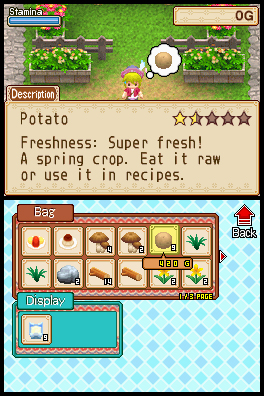 Bizarre Bazaar
As always, the action is handled on the bottom screen, with your character controlled by the D-Pad, and the buttons being used for various different in-game actions such as jumping, planting, talking and buying. The game covers a lot of ground.

You can start the game as either a male or a female (depending on, you know, your gender!) and once you start, you’re welcomed to the city by the mayor, and told to tend to a small farm. The game does an excellent job of explaining everything to you, telling you what commands you’ll need to be mindful of and what needs to be done. In fact, sometimes the pace is a little too slow, and it can be overly accommodating.

Nevertheless, the game lays it on thick, as it wants to make sure you’re ready and prepared for the challenges ahead. As I said before, the bazaar is Harvest Moon’s new baby here, and it is probably the best part of the whole game. Every week the bazaar comes to town, and it will be your job to attract customers to your stall, which is filled with all of your own freshly grown vegetables and plants. Naturally, you can make good money here, and the more enticing the product offered, the more money you make.

Of course, you can skip the bazaar aspect of the game and not take part, but if you want to make money to buy more produce for your farm, I wouldn’t advise it. You can also just go along as a buyer, and get hold of rare produce that you can’t find in the normal stores around town.

Grand Bazaar also features festivals and small recreational events that happen around town, such as a snowboarding race. The game does have its own in-built calendar, which is certainly worth paying attention to, as you could otherwise miss out on some of the spectacles within the game. Unfortunately, the monotony of tending to a farm and bazaar can set in quite quickly. The events are only occasional, and the city itself is quite devoid of life, ultimately feeling quite empty.

In terms of DS functionality, you can use the stylus to draw on a billboard outside your farm, and blow into the microphone to set the windmill propellers moving, but outside of that it is pretty limited. 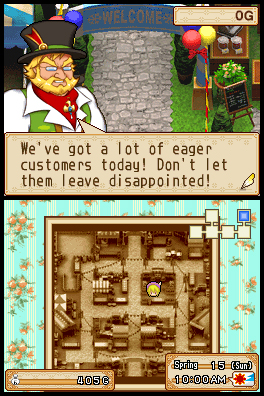 Sowing in the sun
Harvest Moon is a very good-looking DS game. The character models appear full and fleshed out, not like flat 2D pieces of cardboard hobbling along your screen. Environments are rich and attractive, and it is always obvious what you’re working on, or what everything is. The whole animated style is very inoffensive, but definitely overflowing on the cutesy. At times, it gushes so much, you may even feel overwhelmed. It’s just a shame that the characters depicted in the game aren’t really filled with much character, with the eccentric mayor perhaps the sole exception! 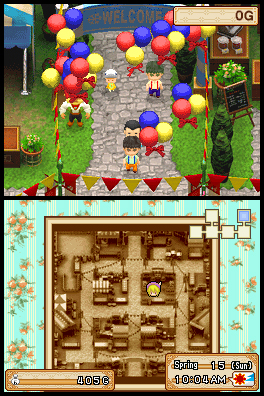 'He stole my balloons!'

The wind is whistling
Much like the graphical style, the sound is very cutesy, with the sound of dialogue tweeting along the screen, and the music setting a calm pace for your outdoor excursions. It’s all very much to-do and expected for this type of game; nothing controversial that oversteps boundaries, and very mindful of its target audience, which is everyone.

If you’re like me, though, you’ll get sick of  the ‘candy in your eardrums’ approach, and turn it down to focus on other things. Like heavy metal or an episode of Fringe!

My farm is better than yours
Grand Bazaar does have online functionality. That’s great right? Not really…

You can connect to a friend, see their farm, and even trade items amongst one another. That’s basically it. No, really, that’s the extent of it. No competitions within the bazaar, no sabotaging another person’s farm, no working co-operatively on a combined venture, no opportunities to marry one another and start sprouting little farmers. No setting up of events, either. It’s really rather dull and uninspiring, which is a shame. There’s a lot that could have been done here, and it’s just been ignored.

Missed opportunities to be sure…

Has the sun set?
Harvest Moon Grand Bazaar is a game that tends to paint by numbers and doesn’t push boundaries. There are certainly innovative sparks here, but none of them turn into anything more than a flicker. You’ll spend a lot of time doing the same thing, minus the fun that you can find in similar products. I found more good in the likes of Animal Crossing, for its character, life and substance. The world of Grand Bazaar just feels uninspired and run down in comparison.

Grand Bazaar isn’t a bad game, and is as good of a farm simulator as there has ever been; it’s just not a particularly memorable experience.