Yuji Naka is a legend in the gaming industry and has pioneered some of the great games we’ve played over the years, such as Sonic the Hedgehog, Nights into Dreams and Phantasy Star. For the most part, the main body of his work has been done at SEGA, however in 2006, he left the company and moved on to form Prope. Since then, Yuji has released titles for Nintendo’s systems including ‘Lets Tap’ and now Ivy the Kiwi. Ivy the Kiwi hasn’t received a great deal of press but word has quickly spread about its lineage. For a man who has spearheaded Sonic Team and much of the work done on Sonic the Hedgehog titles, expectation is high. Ray Willmott from This Is My Joystick has been fortunate to play the finished product and presents his thoughts below. Is this another classic franchise in the making? Read on…

Ivy the Kiwi is probably not the project you’ll be expecting from the creator of Sonic the Hedgehog. For starters, you’re not in control of the game’s protagonist, a cute little Kiwi that’s stuck in an eggshell, you’re controlling the vines that move her about the level. Secondly, there’s no super sonic speed, loop the loops, springboards or casinos, levels are presented in a standard maze-like fashion with spikes and platforms on the face of a level that looks like an old parchment.

The story is simplicity personified. You play Ivy, a Kiwi that has just been born. Normally, at your birth there would be a lot of people to welcome you into the World, including (you would hope) your mother. However, Ivy isn’t presented with that same luxury and upon popping her head out of her shell, looks around for maternal nourishment but finds none. Confused and bewildered, Ivy does all she can to find her mother, with feathers scattered throughout the land being her only clue as to where she might be. I’m still trying to work out why there’s a ‘?’ in the title. Is Ivy confused as to whether she is a Kiwi or not? Does she know what she is? Is that more of a psychological view of the game that this is as much a journey of self-discovery for Ivy as it is about finding her mother? Only Yuji Naka and Prope really know, but it’s certainly food for thought and does add more substance and intrigue to a game that may seem to have simplicity in its style. Essentially though, the crux of the story is finding your mother, there’s not much more to it than that. 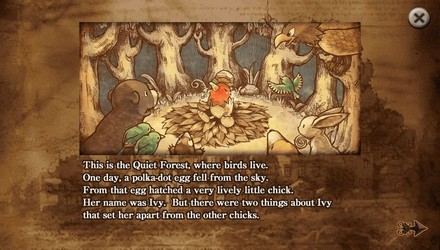 It all starts in a Quiet Forest...

This game is doing just vine
Ivy the Kiwi has some real flashes of Naka brilliance. Even though they’re completely different characters, there are Hedgehog like traits in here, such as when you ‘vine-whip’ Ivy, she moves at a much more accelerated pace than she would normally. This is required for Ivy to vault over some platforms and spikes and get to harder to reach areas. Essentially the level is a maze which you will need to guide Ivy through, using the vines as the only means of getting her from start to the podium at the end of the level, whether that is preventing her from being impaled by spikes or for crossing platforms. Depending on the momentum you put behind your swing on the Wii Remote, will determine how fast and far she flies. The game is very responsive to the controls and great care has been taken to ensure the accuracy is pinpoint, so if you’re gently creating platforms for Ivy, she’ll walk slowly but if you move quickly, the momentum will carry her. The need for a steady hand is required more than you might think. The learning curve will tax you at first, but after twenty minutes of realising what you need to do, suddenly you’re a pro. If you’ve ever played Spider on iPhone, you’ll have a damn good idea how Ivy plays, except you’re producing vines not webs and the Wii remote is required for you to draw these vines. You can only create three vines at a time, with the first one you draw being the first to disappear. This can create some tense situations, especially if you’re using the first vine to prevent Ivy from falling onto a bed of spikes and trying to create another platform for Ivy to progress to the next stage of the level. All the while, the Kiwi is moving around, almost aimlessly around the level, something you’ll always need to be mindful of. Ivy has three lives to begin with, but as you accumulate more points, so you can earn more lives. Even if you die, however, the game is very forgiving and lets you retry at the beginning of the level you were on with a full set of lives.

When you finally reach the end of the level, you’ll have to get Ivy onto the Podium, which looks the same as any you might see at an athletic event. Basically, if you manage to get Ivy onto the position of first place, you’ll earn more points, but the lower she gets on the podium, the less points she gets. This can also trigger a competitive drive in the player, that will make them want to get maximum points from this stage and is a subtle addition to the game that creates a lot of fun.

Realistically, this isn’t a particularly difficult game once you figure out what you need to do and it is quite easy to coast through the 100 levels without much of a challenge. That being said, if you’re wanting to collect all the feathers in the game, then the game does suddenly become much more challenging and you’ll need to think about your movements much more as some of them are quite difficult to collect. There are also leaderboards which you can log your scores on and some competitive and co-operative multiplayer modes. Competitively, you can play the game split-screen and can sabotage another players progress by drawing vines on their window as well as your own, messing up their progress. This is a fun diversion and can actually be an attractive distraction for a set period of time. You can also play the game cooperatively by drawing vines together on the same screen in order to make progress a little more bearable, especially on the later levels of the game. 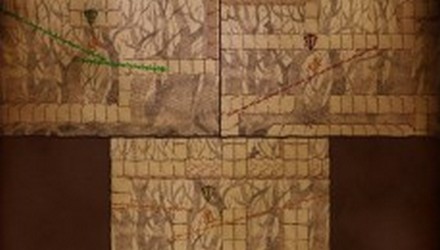 Bedtime Stories
The game is presented in a storyboard like fashion, and while the graphics aren’t the most standout part of Ivy, you’ll find yourself very easily charmed by them. They are beautifully drawn and have an almost 3D feel to them, even though the game is presented as a 2D affair. The presentation is spot on for the game and perfectly meets the vision that has gone into directing Ivy on the big screen. Even though this isn’t a graphical marvel the standard of which we’ve become spoiled by in 2010, there’s something mesmerising about Ivy’s graphics that sucks you into its world very quickly and doesn’t easily let go.

Treading on eggshells
The music and sounds are equally charming with the little Kiwi crowing out her name at the start of every level and soft, catchy melodies that accurately represent the name of the level you’re playing on, whether its Quiet Forest, Lively Town or any of the other eight. The game’s cuteness never becomes overbearing, but it will definitely lodge and stick in your memory whether you want it there or you don’t. 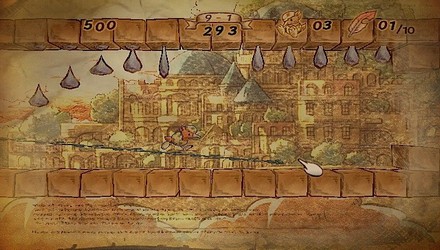 This is how the game looks pretty much all the time.

Does she really need her mother?
On the whole, there are much worse ways you can spend a weekend indoors. This is one of the few third party games out on Wii that actually shines and puts the Wii Remote to good use. Usually, Nintendo are the ones who put the real stamp of quality on Wii Games but Prope have something genuinely entertaining with Ivy. This isn’t the shovelware we’ve been subjected to the last few years and is a very clear reminder to all of us of just what Nintendo’s console is actually capable of.

Ivy the Kiwi comes heartily recommended. As Wii games go, it’s one of the best this year that isn’t a first party venture. In fact, it’s one of the best third party Wii games throughout the whole lifespan of the console. There’s no doubt Nintendo’s console has been met with controversy since the beginning with complaints of ‘shovel ware’ and ‘unfulfilling’ games dominating its line-up, and while on the outside Ivy may seem to be yet another edition to that pile, on the inside it offers something much more. For a title that has received moderate press and was probably mostly unknown to people until the last few weeks, Ivy the Kiwi really does deserve a chance to win you over. Plus, 10p from every copy sold goes to ‘Save the Kiwi’ trust and it’s made by the creator of Sonic the Hedgehog, so surely that’s enough of a reason to warm the cockles of your heart and make you hand over some cash. Give this one a chance, it just might surprise you.