The term ‘exclusive’ certainly doesn’t have the same meaning in the gaming industry as it did just six years ago. Back then, if you chose a console, you could expect to play a certain catalogue of games that no other system would ever receive. However, with contracts taking on new guises, and in the extreme financial climate we find ourselves in, developers need to adapt to the market in order to survive.

Joe Danger has been a PSN exclusive for a long time, with the developers themselves self-professed Playstation fans. Yet, just a few weeks ago, it was announced Hello Games were bringing their enormously successful game to Xbox Live, but also giving it new features not before seen on Playstation 3 (ouch).

Being an older game with a few new features, and a new platform to appeal to, is Joe in danger of wearing out his welcome?

There’s not much of a story to tell. Joe Danger is a stuntman on a bike, and he is pretty damn good at it. That is, until he gets himself into a nasty accident. Many suspected Joe’s days as a stuntman were behind him, and he’d settle down, have a family, buy some cows and tend to a farm.

Yet, Joe has spent an entire career defying the critics, and he is not about to let them get him down now. After recuperating from his accident, Joe wants to get back in the game, and so he starts to build himself back up on his route to the top. So, the game focuses on you and Joe working together to bring his ailing career back with a bang! 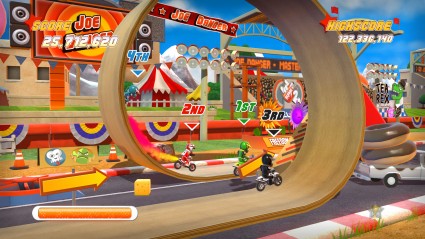 All about the climb.
Now it’s coming to Xbox, let’s face it, Joe Danger is going to be compared to Trials HD. Rightfully so. These games are very similar in style, and yet, they both manage to approach their concepts in entirely different ways. Trials gives off a very indie, ‘I originated on Newgrounds’ vibe, whereas Joe Danger feels like a classic console title, delicately constructed by taking bits from some of the best games ever created. Trials was a grittier, more intense game, whereas Danger takes on a more relaxed tone.

It’s not a casual game by any stretch of the imagination, it’s the very opposite, but whereas the multiple resets of Trials can eventually drive you to rage-quitting, despite the numerous times I had to restart on Joe Danger, the variety and insatiable charm still kept me coming back, making it very difficult for me to put my pad down.

Unlike Trials, Danger mixes its events up all together, so your playtime always feels fresh and exciting. One moment you’re racing against three other bikes, punching them away from you, trying to get to the finish line first, and in the next event, you’re collecting coins in a race against time, taking death-defying leaps, sacrificing life and limb to ensure you collect them all. There are even levels which require you to enter sandbox mode, and force you to manipulate the environment in order to progress.

While you could just leave your finger on the accelerate button and wade your way through many of Danger’s levels, the game encourages you to evolve. In order to unlock later levels, you’ll have to earn stars. Stars are accumulated in various ways, whether you collect letters which spell out DANGER, perform a certain amount of stunts to reach the levels’ intended score, complete the race in its time limit, or even locate hidden stars. In order to get the most out of the game and progress through to its conclusion, there are so many dynamics to consider. For example, there are times where you’ll need to change lanes, perform loop the loops, dodge speed bumps, be mindful of other drivers and evade other assorted obstacles.

What’s great about Joe Danger is that upon going through a course once, failing and retrying, you will gradually keep learning the level, and it is that progression which encourages you to keep trying and improving yourself. Joe Danger is all about introducing you to its endearing content and making you more competent at it by fully supporting you along the way. It’s never asinine or condescending, merely allowing you to progress at your pace, presenting ample opportunities for you to teach yourself, but occasionally offering a few generous pointers.

Perhaps most interesting for fans of the series is the brand new Lab mode. There are 5 parts to Labs, with about 5/6 chapters in each. Essentially, Joe is thrust into a sort of toybox like arena, filled with challenges. The mode is designed to teach you some of the game’s biggest and baddest tricks, and, hopefully, turn you into a pro at Joe Danger. I can honestly say this worked a treat for me, as after playing Labs and then going back to career, I felt much more competent behind the handle-bars. It’s not much different from what the career mode offers, but whereas much of the focus in career is about speed, Labs is much more methodical, and requires a better sense of precision and timing. Worth baring in mind, especially when tackling the wall of death! 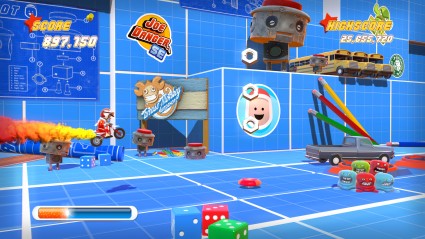 The Labs are a great tool to get to grips with the game.

Start your engines!
Danger is full of eye-candy, and will instantly divert your eyes towards the television set, whether you’re playing or spectating. Considering this was put together by a four man development team, the game’s beauty is enough to rival the quality of some of the best development teams in the world. Whether it’s the mole waving the chequered flag at the beginning of the race, or Joe show-boating when he’s over 40 feet in the air, the game oozes charm.

That’s the beauty of it. Hello Games have created a very fulfilling and entertaining game, but one which can be very frustrating. The graphics go a long way to pacifying that rage, and helping keep your head in the game when you’re up to your thirtieth retry of one course.

I don’t do autographs… well… okay… maybe just one…
If there’s one criticism to make, it’s that the games music can become quite overbearing to listen to on loop. The unfailing upbeat tempo became quite waning on me after a while, and surprisingly, manages to stand out quite prominently when playing the game, not always blending obediently into the background. It’s very befitting of games of yesteryear, certainly, but its overwhelming nature occasionally comes across as forced and even a little bit unwelcome.

On the other hand, some excellent arcade soundbites add a lot to the game. If Joe succeeds or fails a course, there’ll be a reaction from the crowd, along with an announcer adding in some slight commentary, and the same applies to the start and end of the race. Whereas the music is grinding on the senses, these soundbites really do give something to the overall package.

Just the two of us
The Sandbox Mode offers a rare opportunity for you to create and share levels with your friends on Xbox Live. Surprisingly, the customisation tools in Joe Danger are quite sophisticated and provide a lot of scope for some exhilarating, even taxing, thought-invoking levels. They’re not on the same level as a Little Big Planet, don’t get me wrong, but in terms of what is available on Xbox Live right now, Joe Danger does offer a lot of incentives for players to go back to the game, to keep trading levels with their friends.

In addition to that, the game offers several gameplay modes in competitive split-screen. These modes all offer a strong focus on leaderboards, and producing the highest scores possible amongst your friends and the rest of the world. All of Joe Danger’s game types are available here, coin collection, straight up racing, stunt-offs, but none of them are playable online.

Personally, for me, this isn’t a big deal, and I’m quite happy to make the most of this game blitzing through the single-player content or just playing locally with friends on the same Xbox, competing for the best score. For some, however, the lack of online multiplayer has been a source of contention with Joe Danger, and, unfortunately, Hello Games haven’t taken the opportunity to implement it with this XBLA version. 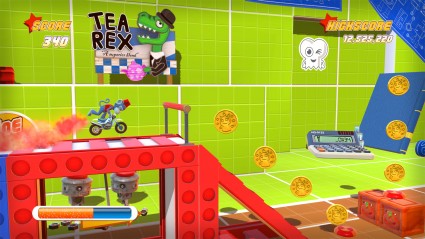 Catastrophe?
Joe Danger is a true celebration of some of the greatest games in the last twenty years. Trials HD, Sonic the Hedgehog, Micro Machines, Little Big Planet, Tony Hawks and even Road Rash. It’s a game that fits effortlessly on the Xbox Marketplace, and, despite an abundance of incredible titles out in time for Christmas, I can think of few better ways to spend those cold and drawn-out winter nights than wrapped up on the sofa, playing through the levels in Danger again and again.

It is one of the finest XBLA releases this year and offers incredible value for money with such a vast array of new and old content. If you loved Trials HD, this is a no brainer. If you didn’t like Trials, but you’re fond of classic games of yesteryear, this gives you everything you could ask for and more. Even if you’re a Joe Danger fan who owns this on PSN already, there’s enough here to warrant another purchase, if you consider avatar items, twenty achievements, as well as the other new features.

Joe Danger sucked me in from the very beginning, and long after I finished playing, still haunted me with its insatiable quality. Hello Games have created a real digital masterpiece.