No matter what the critics say, you’re never too old to go to Disneyland. Sure, the kids get a kick out of hugging Pluto or watching Sebastian the Crab scuttle around during the parade, but the adults still have a ton of fun with the various thrill-seeking endeavours on offer. It truly is a Magical Kingdom, but sadly, it’s a place that many families will never get to visit. No matter how ‘affordable’ travel companies claim it can be; for some, it’s just not low enough.

Which is where the beauty of Kinect Disneyland Adventures comes in. Finally, the adventures can be had in your own living room, exploring the wonder and excitement of the resort whilst interacting with familiar Disney characters. Oh, and it’s a lot cheaper, and can be used whenever you want.

Almost sounds too good to be true…

When you wish upon a star
Kinect helps you interact with Walt Disney’s world in ways unforeseen just a few years ago. Sure, we could be doing this on our gamepads, wandering around with the analog stick, and tapping a button to say hello to Daisy Duck, but it wouldn’t feel right. Throwing open your arms to go in for a hug, or raising a hand to receive a high-five, that kind of interaction could never be genuinely replicated through conventional gaming meaning that Kinect Disneyland Adventures is as close to being at the theme park for yourself as is virtually possible right now.

The Disneyland resort is wide open to the player, allowing them to either fast travel by map or run around and explore, sidling past crowds of other people, going into shops and buying memorabilia and costumes to wear around the park. You can chat to various Disney characters, get their autograph or take a picture with them. Some will even ask you to do missions for them, such as Ariel who is looking for Dinglehoppers, Donald, who wants someone to help him with his campaign as mayor, and Mickey, who wants to give the gift of a photo album to Minnie. That’s not even including going on the rides and earning stars for your performances.

Without question, it’s one of the most fulfilling games on Microsoft’s peripheral to date, and pushes a great case for Kinect being capable of games that aren’t just a glorified mish/mash of mini-games and side-scrollers. It’s a lot more alive than the basic, limited releases the peripheral has received in the past year. 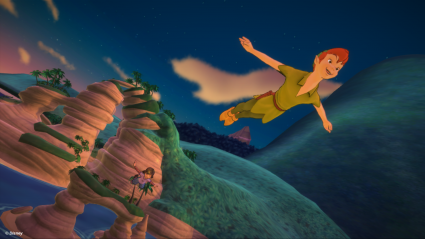 Tale as old as time
For all of their forward-thinking, however, the controls are a conflicting issue. This is the first major third-person game controlled entirely by using Kinect. By raising your arm upward, you can move your character forward (the higher you raise it, the faster you go) and you turn by swivelling your hips in either direction. Surprisingly, this does work. Not always, and certainly not without hesitation, but the groundwork is in place.

It’s a framework which developers will certainly be able to build upon in-time, however, this isn’t the perfect model by any means; the motions are stunted and aren’t as responsive as they should be. You’ll regularly find your character stood stock still in the park, and your hip swivelling not being recognised. However, this is an important message to development houses that Kinect doesn’t have to be constrictive. These types of games can work well with a bit more care and diligence.

Another control issue that does cause problems is the difference between waving goodbye and high-fiving. More often than not I found I was doing one when I wanted to do the other. However, I think this is an issue with the gestures being quite similar in style, and Kinect being overly quick in responding to your actions. Still, it does cause regular frustration within the game, and it’s certainly not a discrepancy to be ignored.

The rides are also another part of the game that I can’t quite get my head around. For the most part, they work well, giving you a variety of different game types, such as snowboarding and sword-fighting to engage with, but they don’t always seem particularly appropriate or authentic. While they try to base themselves on the attractions they intend to be, they do adopt a great deal of poetic license, mostly trying to recreate a story through mini-games.

This is probably for the best, as, otherwise, you’d be spending a lot of time sat down on your sofa, just wailing, screaming and pretending to be thrown around by a rollercoaster, whereas at least Kinect Disneyland allows your experience to be much more interactive. However, I’m a bit of a stickler for detail and I don’t like things to be overly unfamiliar if an attempt is going to be made at replicating them. Unfortunately I got that feeling when going onto some attractions, even though they still managed to characterise a bona-fide Disney feel.

Wonderfully, the game uses all of Kinect’s features, from voice-activated menus to full character control. You can even quickly access the Xbox menu by just calling out ‘Xbox’, and it even allows you to scan pins from the actual Disneyland resort and use them in the game. This game has been designed to showcase the full spectrum of options available on Microsoft’s peripheral, and how immersive they can be. Truly, it does an excellent job. 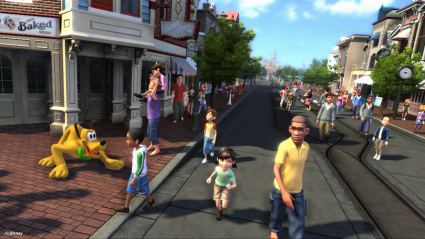 A whole new world
Disneyland has been painstakingly recreated for this game. Right from Main Street USA to Frontier Land, everything feels genuinely real and exciting for the player. The attention to detail is astonishing at times, even down to the positioning of a particular shop, and, as such, each land manages to capture its own distinct feel, just like the resort itself.

The same has to be said for the characters, and their own unique animations. Each time you interact with a Disney character, you can get up close with them, do a little dance, have a high five, a hand-shake and even a hug. Each character does something different very suited to their own style. Whereas you and Mickey dive into a long, warm hug, your character will show a lot of apprehension about trying to embrace Beast until he beckons and encourages you to come close. Even more humorously, you can essentially squeeze a very timid and shy White Rabbit. Some characters won’t even allow you to hug them. It just depends on who you meet.

There are some graphical hiccups in the game. My character did get stuck in the walls of some shops, and some of the animations suffer from clipping issues, but all in all, this is a beautiful game, with a very obvious and well tended-to source material.

Hakuna Matata
The wonderful thing about Kinect Disneyland is how alive the park feels. It would have been just as easy to create the park and have you just interacting with Disney characters, but the developers have gone the extra mile, adding people traffic. What’s more, if you stop and listen to the background noise, they all have their own script. You’ll have children shouting and screaming ‘Where shall we go next?’ desperate to get onto another ride or see another character, but you also have mothers putting their foot down, telling their children they ‘Need to eat’.

From my time with it, I have to say that the Voice Activation in Kinect Disneyland works really well. Heck, you may actually consider using it, unlike in other games. It’s responsive, it works well, and navigation doesn’t feel like a chore. 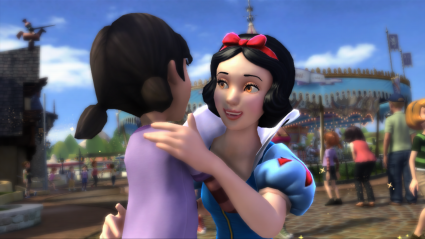 If this was real, the girl would have kicked her in the shin.

You’ve got a friend in me
Another lovely feature here is the Drop-In/Drop-Out co-op in the game, enabling you to go on rides together to gain better combined scores. This is sensibly handled, with one player taking lead duties on some games, while the other still contributing. On other games, it’s all about the both of you putting your all into it. Some of the games may be difficult for younger children as the rules are not always clearly explained, but generally, there’s a lot of fun to be had here.

It’s a small world
I am so pleasantly surprised and happy with this game. Of all the titles due out for Kinect this holiday season, Kinect Disneyland managed to stand out as the most evolved, exciting and entertaining release of the bunch. It’s not without flaws, and work in some areas definitely needs to be done (no competitive multiplayer, some gesture issues, controls are hampered and graphical hiccups) but what you have here is a title that takes full advantage of the peripheral, creates an amazing playground for kids of all ages, and shows that a game with an open-world environment can exist and thrive on Kinect.

Disneyland Adventures is fun, and, ironically, an important release, which will undoubtedly serve as a benefit for the growth and development of future Kinect titles.