Review: Knights in the Nightmare

Knights in the Nightmare is one of the latest Japanese RPGs to land on the Nintendo DS state side. The title was developed by Sting, and produced in co-op with Sting and North American producer Atlus, who brought us a big list of Japanese titles and the lengthy Persona series. Now, I’ve never been big in the Japanese RPG scene outside of some well known titles and the occasional Disgiea play through, so it comes as no surprise that Knights in the Nightmare made it all the way to release date, without so much as grabbing a small portion of my seriously short attention span.

Knights in the Nightmare favors action over turn based game play, as a combination of Strategy RPG and Bullet Hell type characteristics. In this little number, your contemporary RPG turn based battles are thrown out the window in favor of something a little different, and a lot more challenging, but is it necessarily a good idea to throw out the old, tried and tested systems RPG fans have come to love?

The Snorey
Story wise, I found myself unmoved. The game opens with a fair bit of destruction at the hands of an unknown maiden clad in armor, who is inexplicably destroying anyone who dares stop to strike a battle pose in front of her. All the while the story attempts to get off the ground by hinting that the maiden is escaping from a castle after supposedly stealing some sort of artifact of unknown power for an unknown reason which will lead to unknown events causing some sort of unknown disaster. Stick with me here, as it gets worse. Next we jump to you, the player.

You control a little glowing orb referred to as “The Wisp” who apparently has the power to revive the recently deceased soldiers in the different battles you come across, who then fight for you.  As the game progresses, the history of your wisp is revealed through the deaths of these fallen knights, which plays out in a cut scene following every battle. Only the story is very patchy, and jumps around in the time line so much I want to give the game an injection of Ritalin just to settle it down.  Luckily, all cut scenes have a handy skip button which received a fair share of use and saved me from forgetting I had the game running while I looked at porn to pass the time between battles. 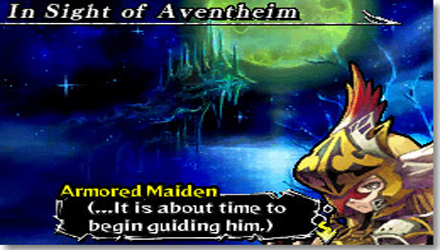 The Gamefrey
When you aren’t mashing the skip button to get through the cut scenes, Knights in the Nightmare rewards you with some rather challenging, if not occasionally frustrating combat. First off, to really understand what is going on, you need to play through the tutorials before beginning the story. Luckily the tutorial does a good job explaining the game play, through ten lessons that hold your hand all the way through. The battles revolve around two parts, the prep phase and the actual battle. In your prep period, you can move your stylus over the different enemies on screen to find out their elements, movement paths, and hints that give away their attacks.

This is also where you find out which knights you will be using for the battle. Every fight comes with a few predetermined knights with their own classes, which use a certain weapon, that you must have equipped in one of four slots. Weapons have elements, and every monster has an opposing element that it is weak to, fire vs ice, light vs dark, only  your weapons can only be used in one of two phases. Phases come in the law or chaos variety, and effect the attack patterns your knights use. If you don’t like the knights you begin with, you can switch them out for others given to you, or ones you have recruited yourself. Once you have your knights all set up and their proper weapons equipped, you are ready to fight.  Now the frustration begins, as there is no turn based nonsense here.

You control the wisp with your stylus, moving to ‘grab’ one of the weapons you selected, then dragging it to the correct knight, all while dodging different enemy projectiles. Your knights do not take damage, but the wisp is what must avoid attacks, as being hit will damage your time, which is also depleted by attacking. So if you are hit less, you get more attacks in, which will lead to defeated enemies and ultimately victory after so many turns. Yet all the dodging of flying bats, flaming skulls, pieces of glass, and meth needles usually results in you accidently activating a knight to attack and waste additional time. 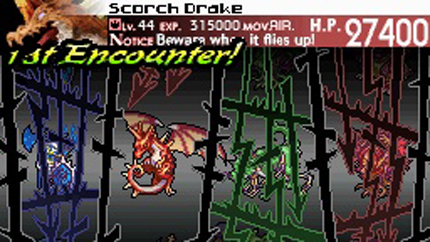 Great Graphics, Batman
When it comes to most RPGs, I have never been really worried about the graphics of story scenes. I have always wanted to see the biggest, brightest, and ultimately seizure inducing explosions imaginable. Knights delivers, with some attacks that have so many sparkles, lasers, and flying muffins that I will sometimes use certain attacks knowing full well it won’t do much damage and waste time, but it looks great. Enemies also come with some notable attacks which force you to hide your wisp in the bottom corner of the screen just because you don’t know what is about to happen.

Your typically encountered monsters attacks are colored with their corresponding element, making it easier to find that particular enemy, and dispatch them after releasing a particularly annoying or difficult to dodge move. Boss fights have some of the bigger, nastier attacks which take up large portions of the screen with projectiles that explode outwards, or chase your wisp on screen making escape fairly difficult while you are distracted with shifting colors. Honestly, I was impressed with the games overall graphic quality, even all those cut scenes and their sepia tinted nostalgia for the days of SNES. 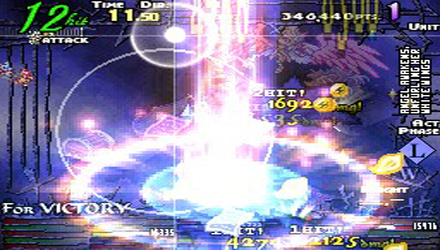 A sound rebound
It’s there, but mainly for the cut scenes to set the sort of sad, regrettable mood you would expect when valiant knights are falling in the name of service and sales figures. Ultimately, music seems to be in the back seat here, and lets sound effects take the forefront. When charging attacks, you can make out an audible chime telling you your attack is ready. This comes in handy when you can’t afford to look to the side of the screen to see the charge bar, or else you might be hit and loose fifteen seconds of battle time. Otherwise the explosions of attacks sound robust, and each class has phrases they scream in a typical anime manner before executing. All around the sound could use to be turned up a notch or two, but it makes do and gets the job done.

Concluding the nightmare
For the overall experience, Knights in the Nightmare defiantly makes up for the little flaws in the game play. The learning curve starts off a little steep without the tutorials to get you ready for the first conflict, but once you understand the controls it just takes a little practice to take on some the of the more difficult battles. Then once you’ve sunk hours into playing the game and you earn your ending, there is a game+ mode, and other additional endings to come across. In addition, there are one hundred plus knights to pick up along the way, so you can satisfy the inexplicable urge to collect souls and make them battle to the death for your glory.

Avoid it, try it or buy it?
If lengthy RPGs are your thing, you will like this title. If you like a little challenge, it’s got what you are looking for. Give it a try, and if you like it then grab it up. Knights in the Nightmare was released in the US on June 2nd. At current this game is only available in North America and Japan.