Harry is very attached to his wand; you could even say he uses it more than a mobile phone (who does that these days!?). It’s definitely got him out of some tough scrapes. It’s also provided him plenty of laughs. Whether he’s summoning a patronus to quell dementors, or splattering cake in the face of his distant relatives, Harry is pretty invested in his little wooden wonder-stick.

However, as he grows older, so his problems get much worse. Whereas Years 1-4 of LEGO Harry Potter were filled with a great deal of wonder and excitement, in Years 5-7, darkness is definitely spreading and the only way to stop it is to confront Lord Voldemort once and for all.

How does the generally charming, easy-going LEGO franchise deal with such ferocious source material?

Making an unbreakable vow
Years 5-7 are full of dramatic moments, tragic sequences and eventful set-pieces that will change the landscape of J.K. Rowling’s World irreparably. Harry has already learned so much about magic; he’s already dabbled in the dark arts and experienced so much death. Yet, the worst is to come, and no matter how desensitised he is to the torment and slaughter, nothing can truly prepare him for the resurgence of Voldemort and his Death Eaters.

Which is why, handling this in a LEGO form is probably the most challenging recreation Traveller’s Tales have been tasked with to date. Yet, they’ve managed it quite wonderfully. 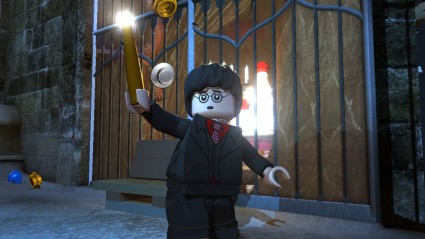 Certainly, Years 5-7 manages to keep the allure of its predecessor, still making light of pivotal scenes, but making it very clear what those scenes are about. On occasion, perhaps the LEGO humour is pushed a little too hard, where simply ‘keeping to the script’ would have sufficed. That said, it never feels overly forced, and shoved down our throats.

However, TT have done a fantastic job in keeping subtle dark undertones incorporated throughout the game, most of which can be seen in Harry’s tumultuous dreams (depicted like a LEGO comic-book) and the landscapes he is forced to visit. The game plays, almost, like a black comedy. Also, more than ever, the game seems more alive with narrative, even though there isn’t a line of dialogue or a word uttered throughout the game.

This is particularly difficult with such complicated plot points and occasionally, Years 5-7 does suffer for this, with the action sometimes getting a bit convoluted and incomprehensible. Some scenes will pass you by if you’re unfamiliar with Harry’s final adventures, and will make little sense if you’re not a fan. Still, an amicable job done by all involved.

Years 5-7 has certainly taken more prompting from the films as opposed to the books this time around. There are still some nice nods and references to the original text that only readers will pick-up (as there are even more subtle winks to the fandom), but it’s definitely a lot easier to pick up if you’re solely a Potter film buff. 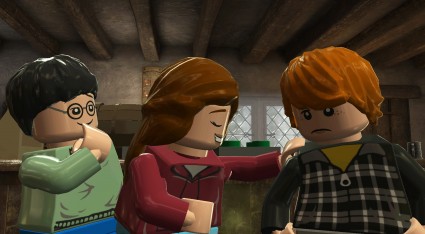 The gang's all here!

He’s no snot-nosed kid now
One of the core differences in Years 5-7 over the original, and indeed, other LEGO games, is the style of levels you play. As Voldemort grows in strength, so Harry needs to adapt and evolve his strategies. For example, throughout Order of the Phoenix, Harry has to attend lessons with Snape where he is forced to confront his fears. This continues until Harry finally faces Voldemort, to try and discover his weakness.

Also, while Years 1-4 made an effort to try and mix things up so you weren’t always playing Harry as the lead character, Years 5-7 goes one step further with that, enabling you to backtrack in time and play as a young Dumbledore visiting the infant Tom Riddle and even taking the guise of James Potter as he bullies a young Snape! There’s even a great level in Deathly Hallows where you play out the Three Brothers story. Traveller’s Tales have gone the extra mile to ensure this doesn’t feel like a generic LEGO game, and have really dug deep into their bag of tricks to keep the whole experience fresh and exciting, whilst remaining very faithful to Jo’s story. The ensemble of playable characters in Years 5-7 is phenomenal and a real whose-who of names in the Potter-verse, from the obscure to the obvious.

The best part of LEGO HP is the open-world feel it has when compared to other LEGO titles. If compared to LEGO Batman or even Indiana Jones, Harry Potter has managed to push past the level-to-level stigma you’ll be familiar with, and allows you to walk around Hogwarts and its surrounding area, moving from place to place to progress the story via your own free will. Sure, there are large arrows and ghosts with ghost studs always guiding your way, and there are certain areas of Hogwarts you won’t be able to access until you learn a certain spell, but Hogwarts is wide open and encourages exploration.

With the use of spells and the spell-wheel, this also manages to feel very full and different from other LEGO titles, the ability to cast various destructive spells, or only be able to use certain types to unlock specific areas. It’s incredible how dated this makes prior LEGO games feel, how much more fulfilling and considered this release is, when you look back at TT’s history with the franchise. They’re a studio that have come a long way. 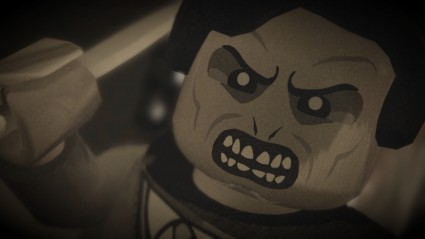 This guy looks so angry he could shit bricks. LEGO bricks, obviously.

Expelli-Art-Mas
There’s a real High Definition gloss emblazoned on Years 5-7. The series feels less befitting on a previous generation, and the character models seem more like their intended target. They’re all very distinct and appropriate for the world they’ve been created for. Although, perhaps Luna looks a little too dolled up for the occasion..

New to this game are the LEGO Dream Sequences that Harry experiences throughout the game, and are made up into a mini- LEGO Comic Book. These are masterfully done, recapturing previous sequences you’ve played in the game, and creating a foreshadowing for those to come. They’re an excellent way to push the narrative in Years 5-7 like no other LEGO game, and again, feel very suited and appropriate in the Harry Potter World.

Avada-Avacado
Back once again is the amazing soundtrack from the films, which has been fully licensed and used to incredible effect. Where the majority of other sound in LEGO HP is muffled voices, exclamations and squeals, this gives the game a dramatic, thrilling, and, therefore engaging constant throughout. 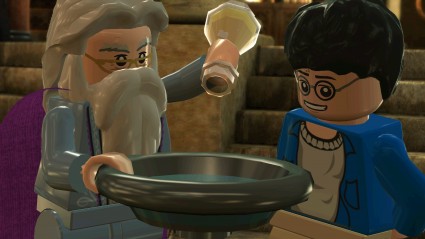 Harry spends more time with old men than any young boy should...

Something worth living for?
LEGO HP Years 5-7 improves on Years 1-4, and remains as timeless as its source material. Traveller’s Tales have taken some of the most difficult, intricate text out there, and converted it faithfully and believably into an absolutely brilliant game.

In a year saturated with LEGO releases, this one manages to stand head-and-shoulders above the rest in terms of quality and longevity. A fitting end for the scar-headed hero, and further proof that Traveller’s Tales aren’t getting complacent with the LEGO formula; they’re getting better at it!