So, the bad guy never gets the girl or the glory. That’s generally how things work out, right?

Well, Megamind, the latest animated feature from Dreamworks, may change your perception on things just slightly. Megamind is the kind of bad guy that is so incredibly awesome, so invincible and maniacally diabolical that he can kill his arch-nemesis (a super hero) and take over an entire city, ruling it with his own iron fist. Now how many of those do you know? Not many I’d hazard a guess.

Naturally, success dictates, and therefore aforementioned animated feature spawns spewed-out cash-in game designed to capitalise on the film’s popularity. However, the game, Ultimate Showdown, is surprisingly not a rehash of the events of the film, but is, in fact, a separate, self-contained story featuring the blue, big-headed protagonist (or antagonist?!) of the hit Dreamworks movie.

Question is, is the story and game any good ? Let’s find out…

Ultimate Showdown follows on from the events of the movie. Megamind’s secret lair has been invaded and many of his contraptions and collections have been raided by a criminal entity known as the Doom Syndicate. Not only have they taken many items precious to Megamind, they’ve also stolen samples of Megamind and Metro Man’s DNA, and his DNA Tracking Device. Peeved, Megamind goes on a quest for redemption to reclaim everything precious to him and bring down the Doom Syndicate once and for all!

Pew Pew Pew!
That header will become a very familiar sound as you play the game. In fact, it will be so frequent that it becomes annoying. As Megamind, you are armed with a laser which is gradually upgraded as you go through the game. You’ll upgrade the weapon by collecting B.I.N.K.E.Y (Blue Ion Nano Kinetic Energy) which serves as the games currency. Once you store this and collect it, when you return to Megamind’s lair, you can purchase these upgrades which include upgraded damage, range, rapid fire and more. However, you’ll need to be careful, as every time you’re killed you’ll lose some of that B.I.N.K.E.Y and therefore have less to spend. Although, don’t worry, you won’t die often. You’ll also be able to change the type of gun you have, so you have a laser ray to start but later can use a shrink ray. You’ll also acquire a tesla glove , which is used to help you in battle. Throughout Ultimate Showdown you’ll need to use each of these items to help you get through each mission, fighting enemies and solving ‘puzzles’.

I put puzzles in inverted commas, purely because calling these puzzles, is like calling a golden retriever a cat. Using the tesla glove to activate the same console again and again isn’t exactly a brain teaser. It’s wasted resources and frankly, the game could have been made so much better had they at least tried to be a bit creative with the usage of these items. To make matters worse, you can only hold one of these weapons at a time and will need to collect them every time you need to use them in the game world. This is time-consuming, unnecessary, generally annoying and frankly, only backward logic could have implemented this into a game in 2010 when this has been a dated aspect of games for many years. Why would you torture us like this?

Another thing I noticed is that the game has one difficulty set, so you can’t tone the game down or ramp up the difficulty as you would like. You just select the mission from Megamind’s lair and go. Personally, I found myself soaring through the game with absolute ease. Ultimate Showdown is not going to take you long to get through from start to finish. You’ll be done with it in a matter of hours and that is to an utter conclusion, every achievement, every artefact, and you’ll have played each mini-game to death. Not much incentive to pick this one up at full price is it? 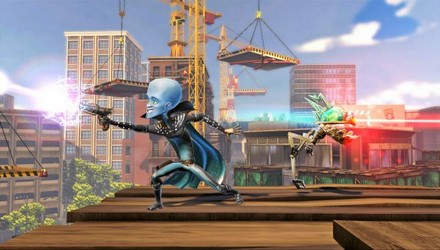 While it is quick to fly through from start to finish, somehow the tedium still manages to set in very quickly. You have to get THQ credit, as they didn’t just create a game that follows the film and created their own story in the Megamind universe, it’s just that the gameplay is so very tedious, monotonous and generally dull, you won’t even care. Additionally, the weapon upgrade system is a half-hearted effort that doesn’t even bother showing you statistics on how your weapons will be upgraded and the use of a right stick to control the camera around Megamind is pathetic! Really, why did they even bother?

Do I look like a hero?
To look at, though, Ultimate Showdown is a very solid representation of the movie, all the characters faithfully created and will be instantly familiar to anyone who has seen the movie. There’s familiar favourites moved over from the film such as Megamind, Minion, Roxanne Ritchi, even Metro Man makes an impact. These are all well created, very colourful and enriching for children and will draw them into the game very quickly. THQ should also be commended for the diversity of environments on display, from a Construction Site to a Sewer, and the same applies to your enemies. On this, they did a good job.

Except the game is also plagued with silly, unnecessary glitches that just smack of rushed development, such as Construction Workers running inside walls (yeah, work that one out!) and the ability to slip on surfaces you’ve just jumped onto, to name a few. You’ll also find yourself going through the same corridors again and again, seeing the same things, almost doing exactly the same things throughout a whole level and suddenly realising that you’re losing the will to see the game through. While there’s diversity in environment, there’s zero creativity in level design. 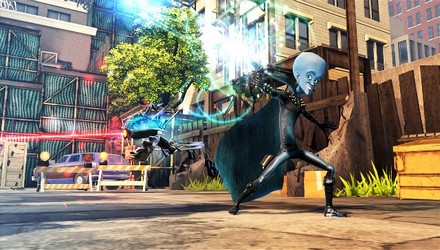 Hear me roar!
As always, it was frustrating for me not getting authenticity in voice acting. Whenever a game is funded and sourced to tie-in with the release of the movie, the actor who stars in the movie should also be contracted to voice the game. Even if they just copy soundbites from the movie using the real actor, as there’s nothing worse than getting a lame imitation to try to cover up for the fact that they can’t get Will Ferrell and Tina Fey. Not to mention that the dialogue lacks the spark and wit of the movie.

What else bugged me is that the Megamind movie had a really good soundtrack, some classic rock and roll in there which really added to the ambience and atmosphere. I know there are licensing laws in place, but I think it would have been cool to even have some proper rock tracks to accompany the game instead of… whatever it is we ended up with.

I don’t need no stinking sidekick!
Megamind gives you the option to play co-op with a friend throughout the whole campaign, though you might seriously wonder what the point is. It’s not as if the experience becomes so overwhelmingly difficult you need a partner, at times you feel like you’re getting in each others way rather than helping and the second player gets no achievements/trophies anyway. A big issue I have the Lego games and can now translate to Ultimate Showdown. Where’s the incentive for friends to play?

There are some mini-games you can play against each other. You’ll unlock these as you complete levels, such as Pod Racing through the downtown area. This can serve as a brief distraction and is a good way for you to play together, but after a game or two, you’ll soon be looking for something else to do. There’s not much in them to sustain your attention.

The last stand?
You know where this is going. Ultimate Showdown is ultimately dull. There’s no longevity, there’s no substance, just wave after wave after wave after wave of firing your gun, solving the same puzzles and enduring horrid one-liners. I can honestly say that even kids would find this soulless. There’s hardly any entertainment value to be found here and the whole experience just reeks of laziness. All in all, even if you’re Megamind’s uncles, brothers, fathers, cousins, nephew, and you worship the very ground the Avatar reject walks on, you’ll still want to burn this disk in a vat of acid, pull it out just before it completely disintegrates and then throw it in a furnace for good measure.