The terms Sports and Motion, of late, are like peas in a pod. Using motion controlled peripherals to engineer sport-like experiences from the comfort of your own living room is certainly not a new angle, and therefore it was to be expected that Kinect would quickly become inundated with this type of games from the off. Ubisoft were one of the first to seize the day and launched MotionSports alongside Kinect, quietly competing against Microsoft and Rare’s own effort, Kinect Sports.

With a slightly different assortment of games bundled in the package and a distinct lack of Avatars, the burning question is, how did Ubisoft get on?

Ready for action!
It’s nice to see that MotionSports comes bundled with different sports from Rare’s own game. Whereas Rare focused on some traditional favourites like bowling and table tennis, Ubisoft have tried something different, implementing American Football, Paragliding, Skiing and Horse Riding, alongside old favorites like Boxing and Football. Naturally though, this is still a sports game through and through and that fact cannot be escaped. Unfortunately for all of us, it’s an incredibly poor one and it won’t take you long to figure that out yourself. On paper, the idea of trying these games is actually quite exciting and you will think that this game can offer you something among all of those bundled in the package. Unfortunately, the translation for each and every one of these games flops rather than flourishes

Giddy up!
Let’s start with the horse riding shall we? Um, well, how to say this nicely? It handles horribly. Just trying to turn the horse was excruciating, slow and long-winded. The principle of the idea introduced here is good, and trying something different with the sports package is commendable but this was just awfully stunted, unresponsive and for the most part, unenjoyable. It’ll be a long time before another development house can convince me that Horse riding is a worthwhile endeavour on Kinect, because this really does fail on so many levels. Not only is this a sluggish experience that is, frankly, nigh on impossible to obtain any sort of ‘Best Time’ or High Score, but you start forgetting that you’re trying to showjump yourself to gold and glory. You feel more as if you’ve just had sex with thin air with the amount of groin thrusting going on!

Hey, boxing should be easier to recreate. That can’t be hard, can it? Well, that would be wishful thinking. Much like Fighters Uncaged, throwing a punch from your left usually means you won’t throw a punch at all or throw one from the opposite side, which makes sense, naturally. The only thing that seems responsive is the guard, not to say that makes much difference as punches manage to seep through anyway. As for two players playing this locally? Don’t even bother. You’ll end up fighting in your living room as opposed to on a computer screen. When compared with boxing on Kinect Sports, let’s just say Ubisoft didn’t really get this one right.

The skiing is a laughable affair. Bend your knees to move, leaning left or right to turn corners and jumping on verges to help increase speed. Thing is? While turning seems quite responsive (almost too responsive!) you never seem to be able to pick up speed and when you do, you’ll have no chance of catching your opposition, even if you’re maxing out the speed gauge. In other words, you’ll never be competitive.

Football and American Football, while you can play games of each, are just filled with random mini-games that are more annoying than fun. You’ll have a penalty shoot-out in Football where it’s you vs the goalkeeper. Of course, that would be fun if you could ever get past the point where you place the ball and can have a shot on goal. Although, when you eventually do take a shot, the chances of missing are almost impossible as the goalkeeper barely even moves to try to save the ball!

As for American Football, there’s a game similar to Reflex Ridge from Kinect Adventures where you’ll jump over obstacles and duck underneath them. Apart from the limited motions you’ll need to perform, the game can’t even detect them properly. I was crouched in front of Kinect for a good few seconds before the target came up, waving my arms around furiously, and even standing up and ducking down again to try to get into a crouched position, but on several occasions, the game couldn’t detect what I was doing. Long story short, it made me look like an idiot for nothing!

In fact, the only thing Ubisoft seem to have got right are the controls for the menus which seem to work perfectly. You know your game is doomed to hell and obscurity when the best you can say about it is that the menus work well! 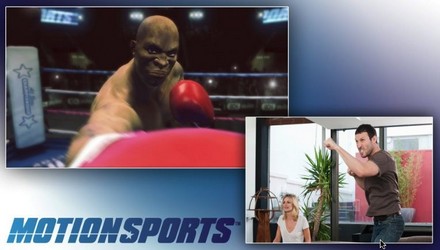 Chew the dirt. Feel the realism!
Unlike Rare’s offering, Ubisoft have attempted a much more gritty, realistic approach with Motion Sports. For the most part, the graphics are actually pretty good in MotionSports and I probably should commend Ubi for their efforts in trying to recreate an authentic sporting experience. In fact, the graphics are probably the best part of the whole game (apart from those awesome menu screens, of course). There’s even some cool graphical effects that make the screen go black and white when replaying penalty shoot-outs.

The game also makes good use of Kinect’s camera allowing you to take  a photo at the end of each event to go along with a newspaper headline made about you. You can also view all of these back on the menu screen which does have potential to elicit a smile. However, the thought of taking pictures yourself, while it will satisfy your vanity for a little while, does eventually get dull.

Hear the grunts!
I’d talk about the sound effects in the game, but frankly I could hardly hear them over my whingeing, moaning and crying at how frustrating the game is. There is a running commentary over most of the sports, (it describes a striker and a goalkeeper as ‘two warriors locked in combat’ and even manages to commentate on the actions of hang-gliding and horse-riding) and while it does add an authentic flair, the dialogue is usually rehashed and repeated during every game, so it soon gets old.

The music is light, with a slightly rock-like style but it soon becomes a monotonous, skull digging, eye gouging, hair pulling, ball ripping ache on the ears, that will probably kill you before you can get to like it. As you can probably guess by now, not much in this game won me over. 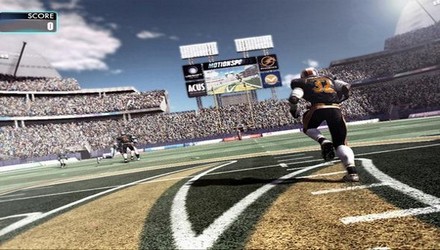 A terrible excuse for a game...

Playing for real with others
Another thing that may grate you, Motion Sports has no online multiplayer. None, nada, zip! Yes, you can play the game locally and on some games with up to four people, but it’s quite hard to believe that Ubisoft didn’t take advantage of the frankly, incredibly strong online multiplayer capabilities of the 360 and exploit them in MotionSports. This is the second Ubisoft Kinect launch title that didn’t do this (see the equally awful Fighters Uncaged) and is more of a dull move on their part than one that will do the game any favours.

Frankly though, some may even see it as a relief as playing any type of multiplayer on MotionSports is like poking a ram in the eye with a stick and allowing him to butt you in the testicles, repeatedly, for fun. If that sounds like your idea of a wild night out, then yeah, sure, MotionSports is going to be your thing. If, you’re perfectly sane mentally and this sounds as appealing to you as eating wet mud, then you’re going to come to the same conclusion as me, MotionSports is an awful, painful gaming experience.

In fairness, the game does make use of the Uplay system prevalent in most Ubisoft games, but frankly, by this point, you’ll have probably given up on the game altogether.

The final word?
It would be outrageous for me to recommend that you purchase this over the much superior and more entertaining Kinect Sports, as there’s not a single aspect of MotionSports that comes close to matching or surpassing Rare’s effort. For me, MotionSports is a joke in game making before and after playing Kinect Sports. If this is ‘Playing for Real’ then I would rather have my Avatar on the screen doing sporting activities for me any day of the week.
This is only barely better functionality-wise than Fighters Uncaged and therefore just slightly evades the crown of being the worst Kinect launch title… but by God is it close!

The game could be very enjoyable, if you didn’t have to sift through a gazillion loading screens just to play a single two-minute game, if you could actually play proper games against your friends instead of a series of mini-games and if the game actually reacted to your actions, instead of completely ignoring you. If you can get past all that, sure it’s a fantastic game.

Frankly, however, I couldn’t. I found myself beating my head against the wall and nearly putting a hole through my TV set in rage. MotionSports smacks of sloppy, uninspired game designing. If this is your one and only showcase title for Kinect, then don’t expect to win your friends over with this one, as they’d probably rather go outside and play pooh sticks than stay indoors and attempt to get to grips with this. Diabolical.