Although the tower defence scene has never been a mainstream part of video games it has recently seen an increase in popularity. iPhone titles such as Fieldrunners and GeoDefense have both frustrated and entertained me on occasional bus rides. While amusing, one common flaw I found these games all shared was the lack of variety. There was never anything else to do once the story mode had been completed.

PopCap is a developer known for its expertise with quirky puzzle games and it’s one that I’ve grown fond of as a result. Some of their puzzle games including Peggle and Bookworm have caused an argument or two within my household. That is why when I first heard it was making a tower defence game named Plants vs. Zombies I felt a bit pessimistic. Looking back almost a year after its announcement, I now feel ashamed for ever doubting PopCap’s abilities.

Plants will fight in the zombie apocalypse, confirmed!
The story is straightforward; you’re a human and zombies want your brain for dinner. The twist however is that instead of conventional zombie-killing weapons (shotgun with chainsaw, anyone?) your arsenal is full of plants as the title suggests. During the game you’ll be given tips and pointers from Crazy Dave, your mentally (and verbally) challenged neighbour who has bizarre fore-knowledge of the zombie apocalypse, apparently.

I plan(t) to kill some zombies
Plants vs. Zombies has a 2D setting where your lawn is the main gameplay area. The zombies try to make their way from the right side of the lawn to the left where your house is situated. At the beginning your lawn has a certain amount of rows (five down, nine across) and your plants go in the square blocks made by these rows. Only one plant may occupy a block until you uproot it (with your neat shovel) or it’s eaten. You can only choose a number of plants for each stage but can buy slots for more in Crazy Dave’s Shop. As they move forward, the undead will eat whatever plant is in their way but the more durable plants take longer to be eaten or even fight back. Do not panic if a row is conquered as there are lawnmowers at the very end of each one. Once triggered these clear out an entire row of charging foes. Be aware that a lawnmower can only be used once for that row each round.

As I played more of it, I found Plants vs. Zombies to have depth in abundance. Most impressive was the detail in the personality of each plant and zombie type. The Tall-Nut plant is a robust form of defence, an attribute reflected in its expression when you first plant it, but you’ll see an increasingly pathetic look on its face as it gets weaker/eaten. During my first playthrough I had reached a stage where I began to see too many of the same type of zombies and suddenly, right in front of me appeared a new kind, wearing Thriller-esque attire. I genuinely laughed out loud from the charm of the presentation. 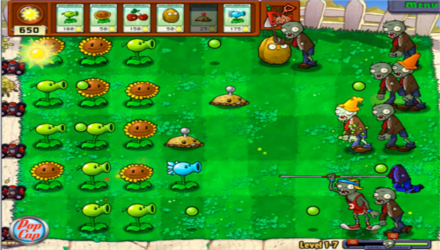 There is no difficulty setting in Plants vs. Zombies as the main adventure mode gets harder only with progression. There is a HUD at the bottom right of your screen which signifies the number of zombie waves left each round. The harder the level is, the more waves you must face. An on-screen warning will appear when a big onslaught of enemies is approaching. The only major problem I had with the game’s adventure mode was the leniency of its difficulty. Even in the latter stages where you come across tougher undead, there was never any challenge too great. The inclusion of Crazy Dave’s tips adds further venom to the argument. Popcap is classically a casual developer, and Plants vs. Zombies reinforces that without allowing more hardcore gamers a way to figure things out for themselves.

For me, the longevity lies with the extra modes which you may choose from after the adventure. My favourite of these perhaps is the Zen Garden. This is a room where you tend to plants given to you either in-game or purchased from the shop. You’ll get different types of plants such as wall-nut plants and cherry bombs which will grow as they’re nurtured; your reward for tending to them is money that can be spent in Crazy Dave’s shop. The mini-games mode is based on several adventure mode segments including wall-nut bowling, and there are also your classic puzzle and survival modes.

Get off my lawn!
Plants vs. Zombies has a distinctive cartoonish look to it; the expression on the zombies’ faces is a prime example of that; it’s a major contrast to how zombies are portrayed in most modern day games! There isn’t any blood, gore or over-the-top violence which honours PopCap’s cheerful persona. Also as you’d expect from any of its games, the colour palette in Plants vs. Zombies is top drawer. Apart from the characterisation of certain plants and zombies, colour is the next best way to differentiate them. I noticed this most with the Peashooter and Pult classes. Being a 2D game I wasn’t expecting much from the graphics or colour design but both are surprisingly impressive in their fidelity and variety. 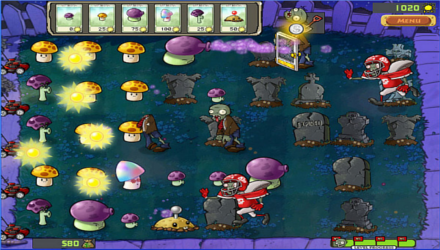 Night of the plant-eating dead

“The Zombiez ar comeing, naaaaaaargh”
Perhaps the most memorable moment of my ten-plus hours playing the game was hearing the incredible soundtrack for the first time, in fact I felt like the soundtrack best represented the charm of the entire game. Days after hearing it for the first time it was still ringing in my head. The range of noises made by zombies is greater than that of plants; for example zombies will make a variety of grunts when approaching the lawn and they’ll make plenty of ‘omnomnom’ noises when eating plants. Unfortunately plants are usually restricted to just making the same, single attack noise.

Best TD game yet?
One thing about Plants vs. Zombies I came to realise while prepping for this review is that the kind of addiction it inspires is unique, at least for me. At times, when writing, I’d suddenly find myself back in-game planting Repeaters to keep the hordes at bay.  An iPhone version has recently been announced and there are rumours that a console version is soon to follow. Although I was filled with skepticism before playing it, a reluctant Steam purchase quickly became a serious game of the year consideration. Whether you’re a casual or serious gamer, Plants vs. Zombies truly is a game for everyone.