Arguably one of the most anticipated games of 2010, Red Dead Redemption thrusts players into the harsh frontier of the Old West. Red Dead Redemption is one of those rare games which possess a mixture of expectation and surprising acclaim. The single payer had one of the most remarkable stories I’ve ever witnessed in a video game and the multiplayer impressively holds its own in a world where Call of Duty and Halo are the main two choices. Rockstar San Diego is now making its intentions clear with the release of DLC just a month after the game’s launch.

The Outlaws to the End DLC is a co-op add on which allows players to team up with a maximum of three friends as you attempt to complete six new missions. These are called River, Walton’s Gold, The Herd, The Escape, The Kidnapped Girl and Ammunition, respectively. At the start of every mission, a narrator gives you a brief summary of what you’ll be dealing with. Take note that this is the only form of narrative in Outlaws to the End.

The gameplay is much in tune with that of Red Dead’s multiplayer, although there are a few tweaks. Unlike Free Roam where you’re immediately thrown into the world, you get to choose one of four classes before each mission. One or two of these are made for specific missions and even specific parts in some. Each class contains different loadouts such as shotguns, repeaters and projectiles. The Soldier class is a Jack-of-all-trades sort of choice, specialising in close to long range combat. It shares similarities with the Gunslinger which excels in close to medium range. The Marksman is the Sniper class, ideal for long range and the Miner is best used in close range. I was careful whenever choosing a class as the wrong choice would jeopardise the mission. For example, choosing the Miner for missions with wide open areas, like River, isn’t wise. 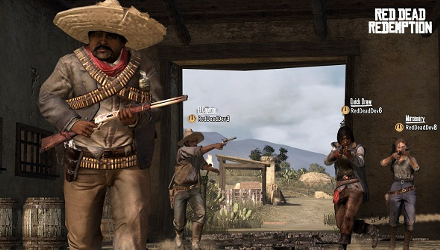 Ammo is fairly abundant and players are even allowed to pick up weapons dropped by enemies in case you’re short on bullets. There are also ammo crates in certain parts of each map where you may refill. One of the more interesting and well-handled tools is the checkpoint system. What makes it different to conventional checkpoints is that once you die, you won’t be revived until your team manage to reach the next one. This is one of the reasons why teamwork is so essential. Speaking of dying, whenever someone takes too many hits they don’t perish immediately, giving other players the ability to revive the downed team-mate. There is a fixed time in which the downed team-mate must be revived and if it runs out, then they won’t respawn until the next checkpoint. Waypoints also make a welcome appearance providing much needed direction.

Like in any other cooperative game, communication is the key. I can’t mention how many times I died simply because a team-mate mistakenly threw dynamite in my direction. The importance of teamwork should not be neglected in this DLC especially in Advanced Co-op. This mode is unlocked after you’ve earned gold medals on all missions. For me, this is one of the highlights of Outlaws to the End. The enemy AI is smarter and even more ruthless than before. Any wrong step and you will be floored, putting your teammates and the mission at risk. As well as a more formidable foe some of your own strengths are taken away in Advanced Co-op. One of the more appealing things about Red Dead’s combat is the targeting system. When set on casual or even normal the combat is a breeze. As if a steroid-pumped AI wasn’t bad enough but in Advanced Co-op your default method of aiming is expert. Suffice to say caution is your best friend. A scoreboard showing how you’ve done will appear at the end of each mission and the goal is to achieve gold medals on each. There are also achievements/trophies included adding extra incentive.

Perhaps the most appealing part of Outlaws to the End is that each mission has its own level of diversity and individuality. You’re being constantly challenged in different ways, whether it’s keeping a stagecoach on course to a checkpoint or evading dynamite launching miners. The inclusion of achievements and the challenge of Advanced Co-op ensure replay-ability. The fantastic soundtrack is audible in certain parts of missions providing that glorious Western atmosphere. Yes, there are the odd niggles commonly associated with Red Dead like bugs and glitches, but don’t let these minor nuisances dissuade you, however. If you enjoyed Red Dead Redemption and have friends willing to play cooperatively, downloading this is a no-brainer. The best part is that you can get all this enjoyment for the handsome price of zero!