Unlike Guitar Hero, Harmonix have been slightly less frequent with releasing instalments of Rock Band. Certainly, you can argue that with The Beatles and Greenday, they’re beginning to milk the Rock Band name, but this is only the third actual Rock Band title in the brand for console platforms, which is actually quite surprising when you consider how long its been around. However, what may be more surprising to you is that it’s also the most innovative and forward thinking of the lot, not just for Rock Band but any rhythm game released to date.

How is that possible? Read on…

Please note: the reviewer of this game did not have access to the Keyboard or any of the pro instruments. Reviewed experiences with RB3 are purely based on the original controllers and how the game fares in Single Player and Online. As such, this review may be subject to change in the future.

Just as Rock Band 1 was revolutionary, so Rock Band 3 pushes the boundaries again. I’m sure by now, you’ll have some idea what these types of games are about, select your instrument of choice, whether it’s Guitar (Bass or Lead), Drums, Vocals or Keyboard and then play the corresponding colours that scroll along the screen to ‘play’ the song that’s on in the background. The formula hasn’t changed a lot since Guitar Hero 1, however, this year Harmonix have tried to create a piece of entertainment that will enable you to get one step closer to playing these instruments for a real. They’ve gone the extra mile and tried to create the most authentic experience possible. Fading is the argument that these plastic peripherals are nothing like the real instrument, the drums now come with two kick pedals and cymbals, the guitar has up to 100 strings and the keyboard is totally keyed up. Harmonix are making a real push to make their game more educational than ever, this year.

Rock Band 3 handles career mode differently from its predecessors.  For starters, you need to set up a band, give them a name, give them a logo, an image, even create the rocker you want for the type of instrument you want to play. Once that’s done, you’re ready to rock! Sorry, I’ll lay off the clichés now…

So anyway, the career mode is different, for one thing, you’ll now have a playlist of songs to complete, rather than working on individual songs. The set list usually strings 11 songs together based on type and difficulty and the game will then score you at the end of each song, showing your position on the leaderboard, your accuracy, your note streak and the like. Some people might find this lengthy and perhaps dull after a while, but the song selection on this game is so dynamic and exciting, that honestly, you’ll find something you like in most of these set lists.

Each instrument also comes complete with its own set of challenges which you’ll need to perform to get 100%. Some challenges include 5-starring songs on Expert, others are based on points and some are more creative than that. All in all, there’s about 700 goals in the game (Wow!). You’ll need to fly through them and complete goals in order to complete career and to unlock many of the games hidden gems, such as new instruments, clothing for your avatar, hair styles, facial expressions and more. With a career mode catered to every instrument (including the new pro instruments and keyboard) to maximise your time with Rock Band 3, you’ll need the full band. In that sense, there’s a real sense of longevity in the game that cannot be denied and with an ever-expanding library of music, you can’t really dispute that Rock Band is a long-term investment that just keeps giving. It definitely has what it takes to sustain your attention.

Need I also add, I didn’t even play the game with the new instruments and I’m this blown away? I think that gives you some indication of just how amazing this game really is. If you want to play comparisons, RB3 looks at Warriors of Rock in disgust and then kicks some sand in its face as it saunts past. While this year’s Guitar Hero feels like its waning, this year’s Rock Band feels like it’s continuing to evolve, progress, develop and brings a new lease of life to a genre many argue is approaching its sell-by date. While many may argue Harmonix are trying to bleed money out of us with the introduction of a keyboard and pro instruments, they’ve also up varied the game enough that it really will be worthwhile and they’re sure to support these instruments for the next few years. 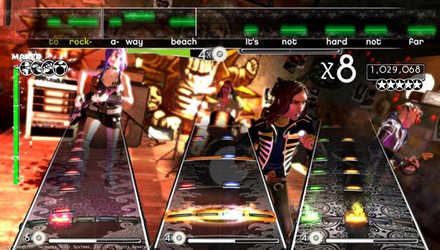 It's just as you remember it..

Looking Groovy
There’s a video of how to use each instruments, so if the thought of trying a new instrument with all these extra elements to consider is daunting, don’t worry. Rock Band 3 looks after you amicably and sets the groundwork for you to get your rock on! Oh… sorry…

Seriously though, the game hasn’t changed much graphically. The screen is becoming a much tighter fit now, though, with new instruments and the ability to play co-op with more people. However, the graphical engine seems pretty untouched with some noticeable tweaks and adjustments here and there that give the game a richer, fresher appeal. However, you’ll not really notice this much as the game is pretty much as it has always been as evidenced by the screenshots in this review. Although, some of the psychedelic looking music vids are cool and I love how they have made some songs look unique with their own graphical montage in the background. Bohemian Rhapsody is a great example as it tries to replicate Queen’s original video by having the faces of your four band members situated side by side on 2 x 2 grid on-screen; just as it appeared in the original video. Brilliant! 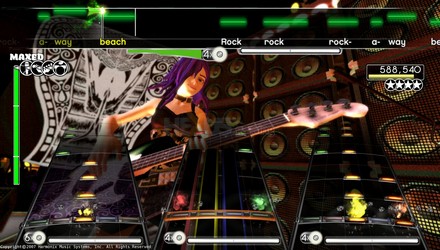 It also has a lot more to offer than ever!

Sounds like?
Oh and did I mention this is probably the best ‘out of the box’ tracklist I’ve seen on any rhythm game ever made?  83 songs in total, spanning five decades, with the vast majority of them being fantastic. There’s a real range that will suit all types of music fans. Whether its ‘Saturday Night is Alright’ by Elton John, ‘Du Hast’ By Rammstein, ‘Beautiful People’ by Marilyn Manson and even ‘Rehab’ by Amy Winehouse, this is extremely varied and almost seems to be a fans wet dream in terms of entertainment. Also, with the talk of post game DLC including John Lennon’s Imagine album and the likes of Bon Jovi and The Doors, it certainly seems like Harmonix really want to make music for every ear in the Rock Band franchise. 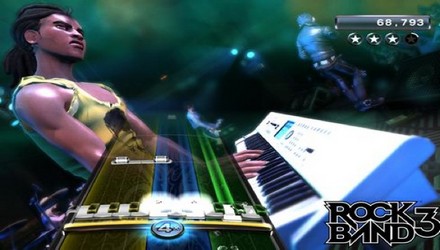 Playing with others
Online is also an improved experience, old favourites like tug of war and co-operative band play are back. The game supports co-op for all the new instruments in the game and the servers seem steady and stable. You can also have all competitive modes open to you for new instruments. However, the game doesn’t penalise you if you don’t own the keyboard or Pro Instruments and still fully supports the vintage plastic peripherals so don’t fret… I really didn’t just do that again, did I?

New features this year allow you to create your own set list (from the full Rock Band catalogue by the way!) and share them with your friends, something long desired by many fans. You can hide songs you don’t want to play and even search for new songs using a built-in song recommendation systems based on personal preference. You can also share your Rock Band experiences with friends over Facebook and Twitter. Not to mention the game is fully supportive of drop in/drop out co-op at all times, meaning if you’re fed up of a song you can just quit or if you really want to join in the fray, all you have to do is press a button. You can even allow a friend to take over on a song to give yourself a break or change your difficulty mid-song. Small details like this continue to add up and contribute to the brilliance that is Rock Band 3!

Same game with knobs on?
After playing this, you’ll wonder where Harmonix will go next with Rock Band 4 (personally, I’m hoping for some Kinect connectivity where you can have someone dancing in the background as seen in Dance Central, while your mates are playing instruments or singing) but in terms of innovation, you really can’t ask for much more. It’s very obvious Harmonix didn’t opt for an annual license with this and have taken time and consideration with Rock Band 3 to get it right. This has paid dividends and really does set it apart from anything else it shares the genre with.

Rock Band 3 is brilliant! So much so, that it could even stand the test of being considered a game of the year contender and that, for a rhythm game in 2010, is kind of mind-blowing. If you’ve ever even dabbled in these games and enjoyed them, this is 100% for you. This is the culmination of every great idea brought into the rhythm genre in the last seven years and is an essential purchase for anyone who’s considered themself a fan of the series, both casual or hardcore. What a beautiful surprise this turned out to be.