Spoofs have been rife in entertainment for decades, and are usually spawned on the heels of an enormously successful intellectual property. That applies to films, to books, and inevitably applies to games. Back in 1996, Duke Nukem 3D came on the scene and brought character and pizzaz to a genre that was as wooden as Pinocchio’s bollocks. It was a game that changed the way we look at the first person shooter genre forever, and had critics and fans singing its praises like a choir of sexually aroused revolutionists (pixel nips and triangular tits are way better than your 2011 curves!) So it was inevitable that someone would come along, put a spin on all of that and make their own concoction of carnage.

Sam had the same hard-ass demeanour, the same obsession with big guns, an uncanny resemblance to Duke and, to top it off, he liked his naked chicks. When advertising the game, they really couldn’t have made it more obvious if they tried. And then, when people actually got to play the game, they could see just how far removed this was from Mr Nukem’s exploits. It became one of the few FPS experiences that actually managed to instil panic and terror in the player, with the sheer numbers of enemies that would descend on your position at any one time. What started out as a bit of a joke turned into something much greater.

Now, after a hiatus, and conveniently when Duke Forever finally hits our shelves, Sam is back in a big way and bringing more tongue-in-cheek than ever with him, but will he have the last laugh?

In preparation for Serious Sam 3 later this year, Croteam have enlisted three separate development houses to work on three different games, all of which come under the banner of the Serious Sam Indie Series. Double D is the first instalment, made by Mommy’s Best Games (who recently did Weapon of Choice on Xbox Indie Arcade). Long story short, they did their mommy proud on that one, and apparently all of Croteam’s mommies as well; thus, their next project ended up being a much bigger one! 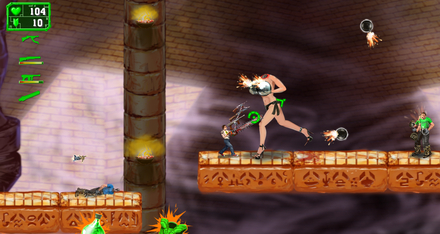 Reminds me a bit of certain sections in Alice: Madness Returns and Shadows of the Damned!

So, once again Sam Stone has been called upon to save the world, except this time, he has to travel through time and fight entities that have plagued humanity’s past. You know, like those dinosaur dudes and tech-savvy chimpanzees. Oh, and pancakes! This time however, he’s bringing the Gun-Stacker (hang on a second, I just need to go and relieve myself…) and the Porta-Pad, two pieces of untested technology that only someone as Serious (or stupid) as Sam has the balls to try.

Enlarged and in charge!
Double D is the ethos of a Serious Sam game (apart from the first person perspective bit), but done in an old-school 2D platformer style. You run, you jump, and you shoot enemies that will be familiar to anyone who has played a Serious Sam game before. Headless kamikazes with bombs for hands, green lizards with a big mouth and a large eye, a floating penis ejaculating a continuous fountain of lava semen (that last one may not be true…)

You direct Sam using the WASD key combination, and then aim his guns with the mouse, clicking the left mouse button to fire. This combination works really well (providing you’re not use a trackpad, obviously) and suits the wackiness this game exemplifies.

Of course, anyone who has played Serious Sam will know that the action gets fast and furious, a rule that definitely still applies here, and while you do get a nice selection of guns, just one burst of fire isn’t always going to cut the mustard. This is where the game’s coolest feature comes into play: The Gun Stacker! Whenever you pick up a robotic arm in the world, you can combine guns together and create utter anarchy.

Not just two guns, though; not just three, but up to six guns stacked on top of each other at one time. Oh, and the weapons you can stack include a flamethrower, a shotgun, a chainsaw and a rocket launcher! You can also stack multiples of the same weapon (there are four of each weapon hidden throughout the game). So, hypothetically, you could have four rocket launchers, one shotgun and a flamethrower on top of each other, all firing at the same time! 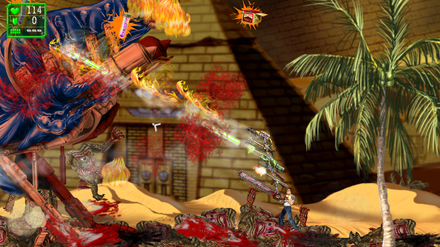 Suffice to say, this game knows how to satisfy a nerdgasm!

The combinations are endless, and, as you might expect, your screen soon becomes full with explosions and bits of enemies. Easily the highlight of the whole game, it can encourage experimentation as much as it can inspire tactical thought, and is an absolutely ingenius addition to Double D that completely works within the world of Serious Sam. Of course, it’s one thing to have that in a 2D side-scroller, but the thought of having it in an FPS shooter does things to my most sensitive area that no human should ever have the misfortune of reading.

I’m just saying though, I’d love to see this in Serious Sam 3.

The other cool addition to Double D is the Porta-Pad, a device which can be thrown down at any point in the game. This allows Sam to reach places he wouldn’t normally be able to, aiding his jump significantly (even though the dude already has the dexterity of a deer on speed!) Think of it as a futuristic trampoline that doesn’t quite have the potential to get you to the moon, but could still put you in a position to eat chunks out of all the fluffy clouds in the sky.

There’s also a lot of hidden locations to find in the game which offer some nice in-joke references that every gamer should pick up on (as well as hidden guns, armor and health). Double D is rife with jokes, as I’m sure you can well imagine. The problem is that half the time they’re either unfunny, or at the most will only draw a slight snigger out of you the first time you hear them. They’re not Duke Forever or, indeed, Manhattan Project (*shudder*) levels of bad, but they’re not ones you’ll remember and tell your mates about in the pub, either.

Additionally, there is a challenge mode which throws Sam into a few crazy scenarios. Chainsaw x amount of enemies within a time limit, score as high as you can, survive endless waves of enemies; it’s all in there, and really buffs out the Double D package. 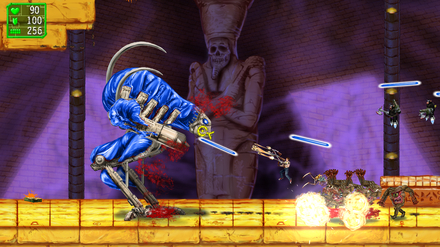 Mother told me not to cum!
You can take one look at Double D and instantly know it’s a Serious Sam game. Everything about the series has been faithfully recreated from 3D to 2D and hasn’t suffered for that transition, either.  Mommy’s Best Games have done an upstanding job, making this feel like an authentic and entertaining experience. In addition to excellently accurate depictions of the character models, this platformer manages to feel as claustrophobic and intense as all other Serious Sam games before it. You’ll easily feel overwhelmed in Double D, just as you’ve come to expect from the franchise. The enemies are relentless, and they will swarm on you with reckless abandon. Cue lots of delicious red and gibby gore!

I also love the scale of the action in Double D. Some of the boss battles will literally make your jaw drop. The size of your character compared to some of these entities is frightening, and completely supports the insanity of the Gun-Stacker. You thought Sam had faced the biggest and the baddest; you ain’t seen nothing yet. Double D consistently delivers shocks as much as it does absurdity.

As is also the case with all SS games, the locations vary significantly, seeing Sam traverse Egyptian sands, and even step foot in The Lost World. Once again, MBG have captured the mood perfectly.

That said, Double D is not always mind-blowingly gorgeous and ingenious. Some of the images are clearly ripped from photographs, and have just been stuck into the game world. I know it’s kind of the point (highlighting an impending humorous event), but it can be a real eye-sore as they don’t blend in well with the game’s engine. It does give a bit of old-school nostalgia to the game, but I think the developers would probably have been better off hand-drawing each of these secret elements using the games own engine (it’s good enough, after all). 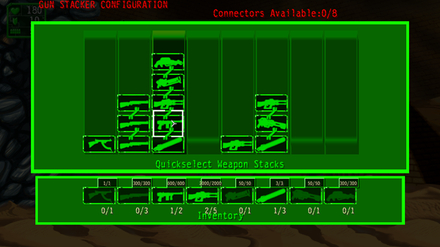 Sounds like Sam
Remember that ‘nnnaaarrghh’ noise the kamikaze dudes used to make? The grizzled grunting of the Gnaars? The rata-tat-tat of gun fire, and the sound of your own heart-beating as you find yourself about to be contested by thirty enemies at once? That’s as alive here as it’s ever been. Much like the graphics, Double D is authentic and faithful to its forebears, and comes complete with a rip-roaring, guitar-riff-tastic soundtrack. Some sound effects are more frustrating than others (those bloody chimps…) but it all seems to come together well. Listening to various different guns going off at once while using the Gun-Stacker can create a headache or two, but generally this is all you’d expect it to be.

Double do or double don’t?
Calling Double D no more than a hype vehicle for Serious Sam 3 is doing MBG a disservice. This is a decent enough stand-alone game that seems to keep giving, even if some of that giving feels a little waned and repetitive. For the most part, however, just before total tedium sets in, the game manages to redeem itself and keep things interesting.

Playing Double D through gave me pangs of nostalgia for several classic platformers (Commander Keen, Jill of the Jungle, even Sonic for those insane jumps), which is a hell of a heritage for any platformer. Considering Duke’s Manhattan Project would be this game’s closest rival (and we all know how much our own Andy K loved that), Double D absolutely rips off its head and shits down its neck. MBG have seemingly done the impossible with Double D, and managed to convert a wholly 3D experience, capturing it brilliantly in the 2D realm. Seems that the joke is on Duke, now.

Oh, and The Gun-Stacker deserves the chance to stand toe-to-toe with Portal 2’s gel as gaming innovation of the year. Great concept!